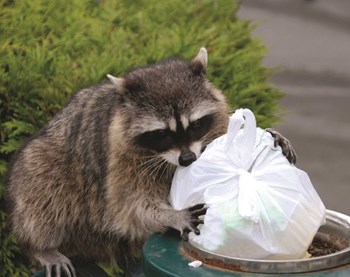 Winter is coming, and they’re looking for a cozy place to hunker down, stay warm and dry, and maybe raise a  family. And like relatives stopping in for a vacation, they’re cute at first, but more than likely will overstay their welcome.

They’re raccoons—and people are easily charmed by their whimsical face-mask expressions and  almost-human dexterity. Who can resist Ricky Raccoon and his cartoon-cute  forest friends, the chipmunks and flying squirrels? There’s an allure to luring them, and it seems like a shame to just throw away that  stale bread or cake.

We all “know better,” but homeowners are constantly inviting wildlife critters onto lawns, porches  and patios, whether it’s conscious [look how cute… he’s eating the peanuts!] or inadvertent [Help, there’s a skunk in the dumpster!].

The problem is, many otherwise-wild small mammals have adopted all too well to  living around humans and often manage to move right in, where they wreak havoc  with their chewing habits, lack of toilet training and unattended deaths in  hard-to-find places. Plus, diseases such as rabies and various parasites can be  a threat to people and their pets when wild animals come in contact. And what  about the ubiquitous Mr. Mouse?

Experts agree that mice, and even rats, can be found anywhere, and are  considered vermin—not “wildlife,” which is treated differently under federal and state regulations. Tom Drapeau,  president of Freedom Pest Control in Topsfield, Massachusetts, reports some of  the experiences he’s had at residential communities with furry critters—vermin or otherwise. “The main problem is with skunks and raccoons… they have become associated with dumpsters especially. We had a 25-unit [condo]  community in Peabody where their dumpster became a regular feeding ground [and]  we rounded up a couple dozen raccoons.”

The problem, he explains, is that “when the garbage guys empty the dumpster, they may not replace the cover  securely on top. Then there is the side door, which is left open, because  people don’t want to touch it…. Also, residents never consider picking up bags [left] outside the dumpster.”

In one instance, at a condo complex in eastern Massachusetts, Drapeau relates, “There was one building containing five units [of different styles]. A raccoon  got in through an attic vent. They can climb up gutters, up the corners of  vinyl siding, or swing down from a roof. Once inside the first attic, she  proceeded to travel into the adjoining [unit’s] attic, then into a knee wall closet… affecting each unit.” A female raccoon getting lost in a maze of crawl spaces and insulation,  especially with her litter in tow, “is a big problem,” he says. Plus, they will chew through anything in their way. “We were working in an old building… it had been re-wired but had wires draped in the rafters in the attic [and] a  raccoon chewed right through them.” In these cases, he continues, “Odor is our biggest issue,” with the potential for dead raccoon babies, and skunks, in far-reaching nooks  and corners.

The chemicals, or “rodenticides,” used to poison rats and mice are controlled by federal regulations regarding  both their composition and how they are used, Drapeau states. Improvements over  the years are meant to insure that there are no unintended victims, like pets  or toddlers. “We use a block rodenticide… it’s a paraffin-like substance that rodents like to chew on, in a block about  one-inch square by two inches and it may be embedded with the rodenticide  chemical.” The block is usually placed along the rodents’ most likely routes, or can be encased in a special station, like a  mouse-friendly box, to shield it from the elements or unwanted users.

Drapeau points out that rats are relatively rare in residential communities, “because they infest only under specific conditions, such as when an area is  unsanitary, or in dense, urban spaces when construction disrupts their habitat.  Mice, however, occur anywhere and usually are found on lower floors and in  older buildings. Plus, homeowners tend to take care of the [mouse] problem on  their own.”

When it comes to larger mammals, the rules vary from state to state. In  Massachusetts, says Drapeau, “You cannot release any trapped animal anywhere except on your own property.” This leaves the only option to be extermination, usually by drowning or carbon  dioxide suffocation, when large pests are trapped. Animal control technicians  working in other states will often, as an alternative, relocate trapped  critters to remote, wooded areas.

As president of the Connecticut Nuisance Wildlife Control Association, and owner  of Trapper Jon’s Nuisance Wildlife Evictions, Jon Horne knows when critters are really a  nuisance—and when they’re not. He states, “The wildlife [we help people get rid of] are usually a one-shot deal.” Unlike insect infestations, which often require an ongoing maintenance program,  these mammal pests are usually gone for good once they are removed.

Horne routinely gets complaints about raccoons and says, “They prefer [to den] outside, but they will go down chimneys and nest on the  smoke shelf. I had an elderly lady call me recently… she was in her kitchen and about to sit down with a cup of tea, and looked up  to see a raccoon sitting on the counter eating a banana.” He adds that: “We always respond immediately when there’s elderly or young children [involved].” This is critical because, he observes, “Rabies is on the rise, and [especially] can be found in bats. They can spread  easily in condo communities through the common attic area. They can enter a  building through a finger-sized hole. Plus, bats have a horrendous odor when  they die [in an attic] and decompose.”

Another attic-lover, Horne says, “is the flying squirrel. They like to get into soffits.” Like most other mammal invaders, they are nocturnal, he adds. “The most destructive, though, is the red squirrel. I’ve seen a case where one chewed through a plank floor into the ceiling below. If  trapped inside, they’ll chew their way through the mullions of windows.”

Horne prefers starting off with low-key methods of removing pesky critters from  properties. “What we do first, is perform a survey” within the property or structure to determine the critter’s numbers and whereabouts. “We aim initially for an exclusion…” This means when the animal is absent, or removed by hand, its entry point can  be blocked. “Sometimes that solves the problem,” Horne says, If exclusion works, then “you really don’t have a problem… We won’t just kill wildlife.”

Leave it to the Pros

Mike Peasley is technical manager at Modern Pest Services of Brunswick, Maine,  which has offices all over New England. “The most common pests we see are mice, since they’re everywhere, and bats, especially in northern New England, where they get into  older buildings with openings under eaves. People feed birds and that attracts  mice, rats and squirrels, allowing their populations to increase. They’re all just looking for an easy place to nest near a food source.”

One mistake people make, he points out: “In warmer weather, you see garage doors open” which is a regular welcome mat for furry guests.

Peasley’s firm follows the same model as the aforementioned Trapper Jon’s, in that, “It’s more exclusion work rather than killing animals. For anything larger than a  rat, we seal the access [and] don’t have to rely on lethal means. We’ll build one-way doors so they can’t get back inside. Sometimes we have to trap them, but not in Massachusetts,” because of its unique regulations.

When rodents are the problem, he says, “We use traps and rodent bait… they are tamper-resistant traps with the blocks of rodenticide. If they need to  be placed outdoors, there is a bait structure we can use that looks like a  rock, so it fits into the landscaping.” He notes that rodents are considered “co-habitators with humans” and are treated like insects when it comes to extermination. Rodents cause  problems in a number of ways, such as when they nest or burrow in insulation  and contaminate it. “Sometimes the homeowner has to get the insulation in attics or walls replaced,” says Peasley. Even worse, he adds, “A certain number of structural fires are caused by rodents chewing on wires.”

Eliminating furry pests is not a do-it-yourself task. Regulations are strict.  For instance, recent federal rules have banned the retail sale of loose,  rodenticide pellets. Peasley notes, “Each state has different regulations and licensing, for rodent control and  wildlife control. Plus, the pest control business, as well as individual  technicians, must be licensed.”

As all animal control experts agree, problems only arise when conditions on a  property become welcoming. Whether a food source is intentional, with bird  feeders or people placing snacks outside for chipmunks—or unintentional, with dumpsters left open or overflowing, it all encourages  critters to seek shelter nearby.

As Peasley contends, “The better a property’s exterior is maintained, the less potential there is for animals to get in.”