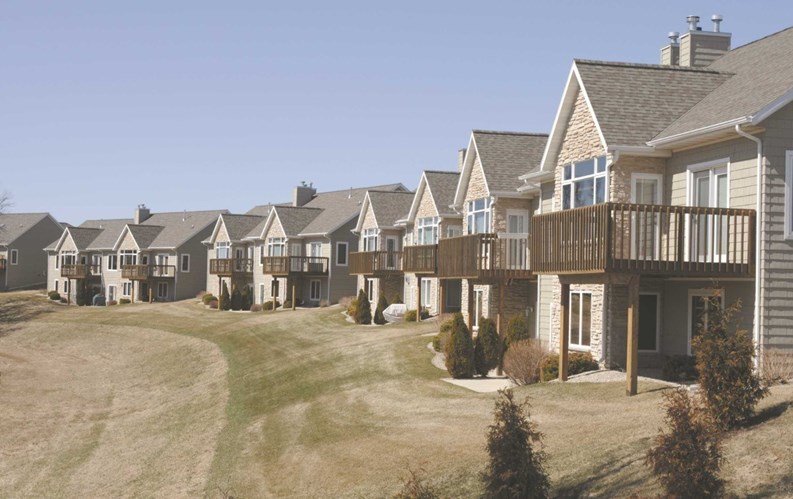 When you consider all the different exterior components that a condo association  has to deal with, decks are sort of like the Rodney Dangerfield of the list—they rarely get any respect.

“Decks are definitely something that people don’t pay enough attention to,” says Robert J. Burns, president of Burns Associates-Engineers in Portsmouth,  New Hampshire, which provides reserve studies and consulting engineering  services to the condominiums of New England. “They need to be cleaned, stained and they can be potential hazards if not  monitored closely.”

Many of New England’s condominium decks were built 10 to 20 years ago, and are now nearing the end  of their useful life—especially if they haven’t been maintained properly over the years. This is especially true in New  England coastal towns, where salty sea air can wreak havoc on wood.

Attractive, well-maintained deck surfaces—whether attached to individual units or part of your condo's common areas—add to the visual and practical appeal of your building or HOA community.  Keeping those surfaces functional and safe is just as important as any other  exterior concern. There are a number of simple things your board can do to  extend the life of your association's decks, and new materials and methods that  can help.

“It’s vital that you have a proper preventative maintenance program for any deck,” says Ed Lenzi, owner of Lenzi Construction & Remodeling, LLC, which does business in New Hampshire. “Upkeep is necessary and a smart condo association will make sure that it’s not something they only look at when there is a problem.”

Out With the Old

These days, most condos aren’t thinking about making changes to their decks, especially if nothing is visibly  wrong with them.

“In this economy, it’s rare to see an upgrade in decks unless there is no other option,” Burns says. “Most condo documents imply ‘replace in kind, treating all unit owners equally’—so upgrading some decks and not others would probably invite unhappiness of  those who were not upgraded. Plus, associations are having enough trouble  paying for what they have without upgrading.”

Even with a steady maintenance program, the best cared for decks eventually grow  old and may need to be replaced. Luckily, a host of new technologies are  available to make deck construction and future maintenance a bit easier.

Composite products such as Trex, which are made of pressure-treated softwoods or  low-end woods with preservatives on them, are heavily in demand.

Unlike traditional woods, composite decks are constructed with screw-type sink  fasteners or with blind fasteners, which are hidden pieces into which the  composite boards are attached with clips. These decks are finished off with  railings that can be coated in nearly any color, and imprinted with textures  that closely resemble the appearance of wood.

“They are variations of wood fiber recycled material combined with ground-up  wood,” Burns says. “When boards select a replacement, they usually go with Trex. While most of the  raw materials used in making Trex are recycled, these materials are carefully  processed to ensure the highest level of quality and performance.”

Pressure-treated lumber needs to be allowed to dry for several months before  sealing or staining. In most cases the maintenance depends on the weather.

“If the deck is located in direct sunlight for extended periods of time or most  of the day, then the deck will dry out and crack or take a toll on the stain  and sealer,” Lenzi says. “In this case, if the deck has been stained, then you might have to re-stain it  every year and at least every two. Sealer is easier and if it is wearing off,  then you will not have chipping and flaking as you would with stain. Therefore,  you can get away with not re-sealing as often and aesthetically, you will be  okay.”

Most composites that have been installed over the past 10 years require  maintenance only once or twice a year to remove accumulated oils, pollen,  grease and mold.

“These composites require power washing and or scrubbing in the spring and fall,  especially if there is not a lot of sun exposure to the deck,” Lenzi says. “In the past two years, composites have become much better. There are now ‘capped’ composites made by Fiberon Decking, Trex and others who are quickly jumping on  board and are the best products to protect your decking from staining and  fading.”

Fiberon and Trex offer a 25-year warranty on stain and fading and will eliminate  the need for power washing.

A smart way to maintain a deck is to create rules and regulations that all must  follow.

“The association board needs to regulate what people do on the decks and what  they put out there,” Burns says. “You can get in some hazardous situations with grills getting too close to the  building.”

In the wake of several well-publicized tragedies involving deck collapses,  building codes are getting tougher—and deck inspections are now something every condo administrator needs to have  on their radar.

The North American Deck and Railing Association is dedicated to increasing  public awareness of the necessity for regular inspection and maintenance of  existing decks and proper installation of new decks.

“A professional inspection will examine every inch of your deck, provide  information on your deck’s capacity limits, identify any dangerous problem areas and give you a map of  what to keep your eye on in the future,” says Mike Beaudry, executive vice president for NADRA. “If your deck is older, this might include a regular deck inspection schedule.”

“Ledgers are the number one mode of failure for decks due to inadequate fastening  to building structures by face nailing vs. lag screws and bolting, and the  connection is hidden from view,” Burns says. “Failure is sudden and typically catastrophic. Prevention is back-up lag screws  or bolts and annual inspection for signs of water entry and rot.”

Some flaws to look out for include rot and structural issues. Especially in  older buildings, layers of paint or stain on a deck may be hiding water damage  or rot, making the problem worse over time. Without the right protection and  sealants, moisture and salt can do a lot to lessen the life span of a wooden  deck.

Other important things that need to be looked for include cracking, splitting,  splintering, loose nails, loose railings, twisted posts and broken balusters.

The largest causes of deck failures are construction methods used on the deck  frame. Lenzi says that many decks were constructed without using a proper post  and beam system, lags into the sill or frame of house, joist hangers, proper  cement footings and with staircases not being secured correctly.

“Our largest issue that we see that causes deck failures is (decks that are) not  properly flashed against the house,” Lenzi says. “Years ago, everyone used aluminum flashing, as this was the code. We have  learned that water is one of the most powerful and most dangerous things to our  homes. Today we use ice and water shield (a rubber membrane that used to be  solely used on roofs for ice dams) for decks and this has proven to be the best  line of defense and almost impossible to penetrate through.”

When these failures take place, the water rots out the plywood and frame of the  structure that the deck is attached to. The deck is now failing and becoming  extremely dangerous with a great potential to fall off and cause injury or even  death.

“It’s important to understand who is responsible for the maintenance of the deck or  balcony,” says Jason Brudnick, chairman of Global Insurance Network in Needham,  Massachusetts. “Once determined, make sure that either the unit owner or the condo association  is keeping the deck well maintained in order to minimize the chance of collapse  occurring.”

Deck collapses, although generally not as major as balcony collapses on mid- or  high-rise buildings, can cause injury to people and possible damage to the  building the deck is attached to.

“There is no special insurance to cover the collapse of a balcony or deck,” says Brudnick. “I can also assure you if there was a lawsuit as a result of a collapse, the  plaintiff’s attorney would name the condo as well as the unit owner.”

“If the injury or property damage went beyond the limits of the general liability  policy, there could be additional coverage under the umbrella policy,” Brudnick says. “In this scenario there is also the issue of whose responsibility it is to  maintain the deck itself, whether it is the condo’s or the unit owner’s.”

Depending on the situation and how the condo outlines the responsibilities for  the care and maintenance of the decks, the unit owners themselves could be held  responsible.

A scheduled program of inspection, maintenance and repair can prevent damage to  people, property, and the association’s finances. Those decks, do, after all, deserve some respect.