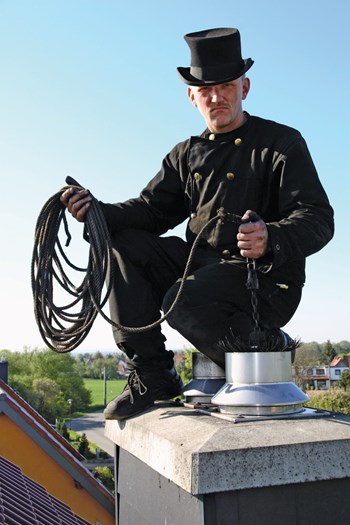 Even cavemen knew that fire was dangerous. But, ironically, we have 21st-century people blithely building fires right in the middle of their furnished, wood-filled, carpeted, upholstered and bookcase-jammed condominiums. And they want someone to tell them it’s safe. The observation comes from Ashley Eldridge, director of education for the Chimney Safety Institute of America (CSIA).

The issue of safety and maintenanceis particularly important in condominiums, primarily because of how the fireplaces and flues are built and because of the relatively dense population of homeowners. In a condo complex, a fire can spread quickly, especially in older conversions that do not have firewalls.

It’s a bit shocking, then, that regular fireplace maintenance is handled in various informal ways by homeowners associations and their managers; there is no universal standard, though membersof the chimney sweeps industry are unanimous in their message.

The fireplace and flue should have a “level 1” visual inspection yearly, even if the fireplace has not been used – ever. “It’s inappropriate to assume that if it wasn’t used it doesn’t need to be inspected,” Eldridge says. It’s not just creosote build-up that is dangerous, but debris from surrounding trees andanimals who try to hole up for the winter, or birds that find the perfect springtime nest at the top of the chimney. A lightning strike can also cause damage that cannot be determined without an inspection.

Anyone buying a previously-occupiedcondo should request an immediate inspection, even if the previous owner never used the fireplace.

That wisdom extends to both single-family home owners and condo complexes; but condo chimneys are usually built differently than those in an older separate home, according to Barry Cyr, broker/owner of Condo Realty LLC, in Manchester, Connecticut. He sells only condos, and manages numerous complexes. Two of those complexes includeunits with fireplaces, and he admits to being worried for several reasons.

First, the fireplaced condos he manages have open attics and limited fire walls. A chimney fire could easily spread down the line.

His second concern regards installing fireplaces in condos in the first place. Older single homes that are built to have fireplaces are typically made withmasonry and a clay flue that provide some protection from a house fire.

But condos usually have chimneys built of metal pipe, often not insulated, with several metal sections screwed together. The chimneys are surrounded by wood, not masonry, and corrosion or separation of the joints can cause sparks or gas to escape. Additionally, when warm flue gas hits cold surfaces, condensation results. If condensation is accompanied by burning “green” unseasoned wood, dense creosote, called“third-degree,” builds up. The stuff, with the consistency of toffee, clings to the inside and provides the perfect fuel for a chimney fire.

“That’s the thing that worries me,” Cyr said.

One complex Cyr manages voted to require yearly fireplace inspections. The manager can advise, but basically the HOA makes the decisions. If the manager disagrees on the maintenanceschedule, Cyr said “any good manager would consult the fire department.”

In one of Cyr’s condo complexes, the association pays for inspections. Of course, a few people always refuse to comply. In the rules governing the complex, however, a homeowner mustthen schedule his own inspection and provide proof, or face a fine or disciplinary action.

“It’s a real safety hazard for everybody,” Cyr said, adding, “Prolonged wood-burning in condos is not a good thing.”

It’s especially not a good thing if a condo owner, hoping to save money on electricity or oil, hooks up a wood or pellet-burning stove to the chimney flue. Every “appliance” is different, says Eldridge from CSIA, and the size of the flue must fit the size of the appliance connection for best performance –performance referring to both heat output and reduction of risk. It’s not a job for an amateur.

Pellet stoves are also meant to be cleaned weekly, but owners rarely adhere to t­­­­­hat timetable, he said. It is important for a chimney sweep to clean the appliance as well as the vent.

A chimney fire can be particularly devastating because it is often silent or unobtrusive until it is too late.

Michael Panzarella, owner of Strictly Chimneys in Berlin, Connecticut, remembers a situation that could havebeen catastrophic, but for a routine call from a homeowner to clean the flue for a wood stove.

When he arrived the next day, he discovered that the wood stove, still burning, was dangerously hot to the touch. When he went to the roof, the flue lining, normally orange, was white with heat, and flames were shooting into the air. He called the fire department.

The heat and flame had penetrated the walls, and firefighters had to hack into wood floors, underneath which they found charred wood. The fire was contained, but “If he hadn’t called me, he could have lost the house,” Panzarellasaid. As it was, valuable property was destroyed.

Panzarella services a number of condo communities. Often, he must bid on the project each year. In addition, some condo owners are given a choice of two or three sweeps, rather than the HOA choosing one. But financially, it pays tohave one sweep clean the entire complex, at least with Panzarella, because he offers a steep discount, as low as $69 per unit for a complex he services each year, to $99 if it goes to bid.

Some artificial logs now on the market claim to clean out creosote, but again, they do not substitute for a visual inspection. “I seriously questionthose claims,” Cyr said.

A camera inserted into the flue can determine creosote buildup as well as debris. Years ago, a buildup of a quarter-inch was considered dangerous, but recently the tolerance has been changedto just an eighth of an inch, Eldridge said. Creosote is acidic, and just that small amount can have an adverse effect on the life of a chimney.

Any artificial log can be just as dangerous as wood, Eldridge stressed. Use must be restricted to one log – not a pileup meant to simulate a “real” fire. Artificial logs contain chemicals, and if poked or prodded they may explode. In some cases they may even leave more deposits than wood. They burn “lazily,” leaving more time for fluid to condense in the flue as compared to a brightly burning natural wood fire, Eldridge said.

Safety is enhanced, of course, by the use of a screen to contain sparks, and a glass door that should be shut when the fireplace is cold and not being used. But the rule, when burning a fire, is “screen closed, glass doors open,” Eldridge said.

If the hearth is shallow, an approved fireproof pad can help protect wood or carpet from sparks. But town officials have jurisdiction over national fire codes. Most likely, Panzarella said, town officials might not notice a hearth thatwas too shallow for the width and depth of the fireplace.

Perhaps the best solution is installation of a gas fireplace if a gas line is connected to the unit. With permission from the board of directors, a condo owner could install a gas fireplace that is clean-burning and low-maintenance. Newer complexes are already installinggas routinely.

In choosing a chimney sweep, Eldridge said it’s important to find someone with CSIA national certification, because that assures a basic standard of knowledge, as well as continuing education. Physics is a corerequirement. Additionally, all certified sweeps sign a written code of ethics.

A business license is insufficient, Eldridge warns, because anyone can pay for a license, “buy a few brushes,” and call himself a “qualified contractor.” The contractor could be qualified to build sheds, Eldridge said – but have no expertise in chimney safety and repair.

Another consideration is insurance. Anyone working on a property must show proof of insurance for all workers, and must be covered sufficiently for the risk involved –such as working on a rooftop.

Certification is expensive, dues are steep, and costly re-certification is required every three years. The CSIA website (www.csia.org) maintains a listing of certified chimney sweeps as well as education obtained and proximity to the homeowner. When consulting the Yellow Pages, it is wise to look for the CSIA logo.

A homeowner should expect to pay between $100 and $300 for an inspection and cleaning, and a writtenreport is pro forma.

Susan Phillips Plese is a freelance writer and a frequent contributor to New England Condominium magazine.