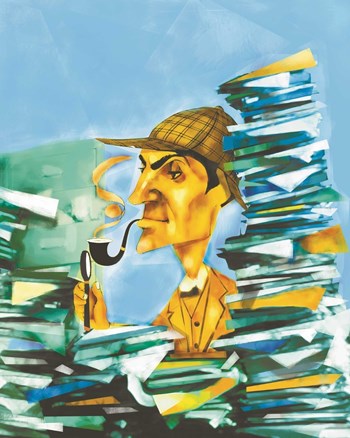 It often arises suddenly. And when the telltale signs do appear, the problem has  likely been years in the making. “It can come up any number of different ways,” says Charlie Perkins, senior partner of the Westford, Massachusetts-based law  firm Perkins & Anctil, P.C.

“Sometimes you’ll have a new sheriff in town—whether it’s a new management company or a new board—and they…look at some of the checks and they seem to have signatures on the backs, or  they were signed over to third parties…. Those are the types of things that cause concerns in associations and often  lead to people saying they’ve got to go back and look at the records in a more comprehensive fashion.”

Not Always the Economy

When those signs do appear—the first subtle hints of condo fraud—a forensic audit of your association’s books will likely be in order. But handling such an undertaking effectively,  and with minimal expense, requires good decision-making upfront. And preventing  a future occurrence means understanding the psychology of fraud—the ways it can occur on a condo property.

“The economy gets blamed for a lot,” says Stephen Pedneault, principal of the Glastonbury-based Forensic Accounting  Services. “Here in Connecticut, we have two casinos. They seem to get blamed a lot. But a  lot of what I see has nothing to do with the economy or the casinos. It has  more to do with our society as a whole.” Pedneault, a seeming encyclopedia of fraud-related statistics, says ninety  percent of his cases are prompted by nothing more than a feeling of  entitlement. “There’s no underlying alcohol or drug or gambling or economy-driven motive behind it. It’s just they wanted to lead a better lifestyle,” he says. “When we have somebody who’s been stealing for fifteen years, it’s kind of hard to blame the economy on that.”

I think it’s just a function of greed,” remarks Michael Brooder, a certified public accountant, who serves as  partner-in-charge of the Hartford offices of Marcum LLP. Brooder says he often  sees condo-related frauds begin very small. “And, depending on the type of scheme they’re trying to pull off, eventually they want more and need more or they need more  dollars to cover it up, and it kind of explodes into something out of control.  And that’s where the red flags come out and hopefully the monitoring process or the  auditors can pick that up.”

By the time those red flags rise, experts say the misappropriation of funds has  likely been years in the making. “We don’t do a lot of cases where the person’s only been stealing for three months,” notes Pedneault. “The last one we just wrapped up, we went back five years. She’s been there fifteen years. I don’t really know when she started stealing.” When such thefts do occur on condo properties—often at the hands of longtime trustees—there may be temptation to hope it was likely all a mistake. But such mistakes,  says Brooder, rarely happen more than once. “It you’re seeing repetitive transactions…that’s not an honest mistake,” he says. “Usually when you get to the level of suspicion of fraud, that’s not an honest mistake.”

Once credible suspicions arise, experts agree that a certified fraud examiner is  likely the best choice to handle a forensic audit of your condo’s books. “I’ve seen traditional CPAs come in and be able to do a perfectly great job—as long as they have a condominium background,” says Perkins. “But I think it [depends on] the level of complexity of what you’re looking at.”

Bring in the Experts

“I use the analogy of the medical field,” says Pedneault. “Forensic accountants, for the most part—if they’re really truly doing forensic accounting—they’re specialists…. I’m a big fan of going to the people who specialize when you have a problem.” Like Pedneault, Brooder feels the likelihood of ferreting out the fraud,  efficiently and effectively, will be increased by the presence by an actual  fraud examiner. “They have the experience and the training with regard to that type of  examination,” he says. “It’s kind of a combination of an investigation and an audit together.”

When a forensic auditor arrives on the scene, arranging for legal representation  upfront may be necessary to insure the confidentiality of any interviews  conducted in the wake of a suspected fraud. Then, once the protections of  attorney-client privilege are in place, the key phrase, says Pedneault, is “tell me the story.” For fraud examiners, understanding the narrative of a suspected fraud—what Pedneault calls “three sides” of the story—is the essential first step in any successful audit. “There’s going to be one side, the other side, and somewhere out there is going to be  the truth,” he says. But getting at that truth—fact checking the narrative, in a sense —can only be done with records. “If there’s a computer involved, we want to preserve that. What ever records you have, we  want to preserve them,” says Pedneault. “Once I know the records are secured and I’ve got a story that sounds credible, time’s on my side.”

From there, say the experts, the association’s desired outcome will govern much of how the case is handled. And, if fraud is  detected, deciding the endgame can sometimes be ticklish in the light of  negative publicity that will often surround a criminal prosecution. From the  beginning of an investigation, board members must decide whether prosecution is  most important, or whether discretion should rule the day. “There’s an embezzlement in the newspaper pretty much every day, and it’s a sad state of society,” says Pedneault. “Statistically, one in nine hit the newspaper. That gives you a little bit of an  idea of how much theft is going on out there.”

In the end, deciding whether to risk media scrutiny may hinge in large part on  knowing your condo community. “If there’s a prominent person from the area who lives in that condominium association,” observes Pedneault, “that’d be a concern. Do a lot of these get resolved quietly? Sure. Getting someone  arrested doesn’t get your money back. It just gets somebody arrested.”

And with prison overcrowding a concern throughout much of New England, victims  are likely to find the white-collar perpetrators of such frauds will see  little, if any, jail time. “In a criminal case, it’s probably going to be a fine, restitution, probation, suspended sentence,” Pedneault says. “I think it’s pretty much known you can steal money and you’re not going to jail.”

In case after case, despite the details, condo-related frauds often occur for  the same reasons. “You’ve got someone who’s self-managed or someone who’s been doing the books for so long a period of time that they become an  institution, and no one comes in there and does any independent checks on that  person,” explains Perkins, detailing the most common cause of fraud at self-managed  condominiums. But, while some in the condo industry may feel such excesses are  more likely confined to smaller, self-managed properties, fraud examiners say  the dangers are nearly as great with professional management companies. “I’ve had management companies embezzle. I’ve had employees at management companies embezzle,” says Pedneault. “You can delegate some of your management duties to a management company, but, if  you delegate too much, and you have no checks and balances, you’re relying on those reports they prepare. How is that any different from someone  internally doing the same thing?”

Experts say simple methods, like adding additional signatories to an account or  restricting the amount of money any single signatory can spend, will go a long  way toward limiting the chances for fraud to occur. Fraud examiners suggest  best condo practices for self-managed properties include splitting duties  amongst the board—allowing a treasurer to write checks but requiring one or two additional board  members to authorize them. In the case of professionally managed properties,  board members should arrange to receive monthly bank statements reflecting  reserve funds and other account balances, thereby ensuring the management  company’s figures match their own. “The biggest thing,” says Brooder, “is making sure there are adequate internal controls. And adequate is based on  the size of your organization. You may have a few people and you may have to  tailor your internal controls accordingly and the board may have to be more  involved.”

“I think it’s important to note that it’s something that could happen to anyone at any time,” Brooder cautions. “As a member of the board of directors, you just have to make sure you have the  right controls in place, you have the right people in your place, and you’re doing your job in monitoring the operation.” And that’s a responsibility that Pedneault feels some board members take too lightly. “When you get on a board—even if it’s a small condominium association—you have a fiduciary duty,” he says. “As a fiduciary, you’re a steward of the funds. You should be emphasizing that we are having proper  internal controls, we are asking a lot of questions, we are insuring that [bad]  things can’t happen. And if they do happen, we find out about it real quick—not years but weeks…. If you don’t want to be on the board, then don’t be on the board. But it you want to be on the board, this is serious stuff.”