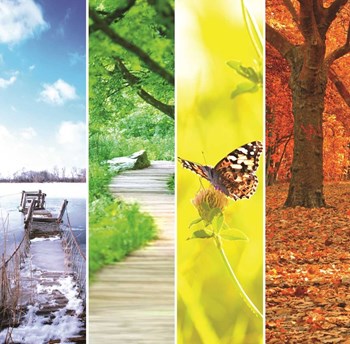 Looking across landscapes buried under record snow levels in February, New England condominium residents might have wondered if they’d ever see their neatly-trimmed lawns and manicured flowerbeds again.

With plows running out of room to put the seemingly endless mountains of snow, the chances of landscaping emerging unscathed from the winter kept declining.

The arrival of spring—at last—heralds not just an opportunity for New Englanders to enjoy the outdoors safely, but also an opportunity for condominium staff and contractors to assess and repair any damage caused by the snow and cleanup efforts. It’s a busy season for residential properties and the folks who care for them.

Before any work begins, though, landscapers and managers, boards or committee members should conduct a thorough walk-through of the property, noting winter damage and areas that need to be spruced up for the coming season. The damage, landscape professionals say, comes from all sides—from snowplows, ice-melting products, hungry animals, wind and weighty snow and ice. Not all winters dump waves of deep snow on property, but seasonal damage can come as easily from a lack of snow as from an abundance of it.

In a good year, or even a “normal” one, a walk-through of the property can be done in March; this year’s record-breaking snow loads, though, may have set many communities’ plans back a bit. With the relatively dry weather in December and early January, Jeremy Fish of Riverside Landscape & Tree in Ashland, Massachusetts, thought landscapers “might get a good jump on spring this year.” Then came the blizzards of 2015, dumping foot upon foot of snow across the region, burying lawns, crushing shrubs and breaking tree limbs.

This is, after all, New England—and landscape professionals, along with the properties they tend, have to roll with the punches. Too little snow in the winter months can lead to desiccation of plants, damage to turf that isn’t insulated by that white blanket, and drought conditions later in the year. An over-abundance of snow and ice, compounded by constant plowing and heavy doses of sand and ice-melt products, can create an entirely different palette of problems to sort out in the spring.

“Spring clean-up starts with picking up the downed twigs and debris that fell during the winter,” says Kevin Cryan of Cryan Landscape Contractors Inc. in Seekonk, Massachusetts. “We rake the turf, clean and edge the planting beds, sweep parking areas to clean up the sand and salt, inspect the asphalt and drains.” Damage from snowplows, he notes, ranges from curbs that need to be re-set to lawns that have been gouged and scraped.

“Before the (growing) season starts, we’re out looking at turf, plants, trees, safety issues like low-hanging branches, or branches that block lights or touch buildings,” adds Anita Gottschalk, operations manager at Garrick-Santo Landscape Co. in Malden, Massachusetts. “We also check pavement, loose steps, and issues in the parking lot like potholes or tripping hazards. Over the course of time, shrubs can get so over-grown that they block access to entrances, or provide a place for someone to hide.”

The relatively snow-free early part of this winter gave landscape contractors a chance to get in some winter pruning, giving them a bit of a jump on their spring labors—and giving property owners and managers a bit of a break on their budgets. “I encourage people to look at a winter pruning program,” Fish says. In the middle of a quiet season, contractors can price those services more aggressively. Of course, the picture changes when Mother Nature blows in and pummels properties with back-to-back blizzards.

But whenever the property becomes accessible for examination, a tour with the grounds committee or manager will lay the groundwork for the months ahead.

“Every association is different,” Cryan notes. “Sometimes we walk around with the property managers, sometimes with a member of the grounds, committee, sometimes both. A lot depends on how the association operates.” For some communities, the tour leads to a determination of what work the contractor will do, and which the grounds or garden committee will handle. “Some sites have a community garden that they maintain on their own, but we’ll go in at the end of the season and just clean it up for the fall. We try to accommodate whatever the association wants.”

The actual labor, says Fish, typically starts with the turf—picking up winter debris, de-thatching the grass—along with pruning shrubs and getting ready for the application of mulch.

But he cautions associations not to go overboard with the mulching. “We apply bark mulch for probably 99 percent of our condominiums,” he says, “because people like the look it gives.” However, Fish says he encourages clients to cut down on vast expanses of mulch, moving instead to more naturalized areas, “making them more low-maintenance and lessening our impact” on the environment. “We need to act globally. Resources are limited. We look for suppliers that are environmentally conscious, too.” Alternatives to bark mulch, he notes, include stones or low-maintenance perennial plantings.

If associations do favor bark mulch, Cryan notes that “more is not better.” Before adding layer upon layer upon layer of mulch, he suggests, “it’s important to see how much you have.” One method he uses is to move old mulch to “secondary areas,” like at the wooded edge of a property, and putting a lighter layer of fresh mulch in more visible spots. “You don’t want to suppress the trees or plants with ‘volcano’ mulching,” he says. “If you’re going to plant flowers and you dig into six inches of mulch to get to the ground, you’ve got too much mulch. Three inches is plenty.”

“I’ve read RFPs (requests for proposals) that want four inches,” concurs Mandi Maloney, business development manager at Garrick-Santo. “That’s a lot; two to three inches should be the maximum.” In fact, she says, mulch removal is often part of the company’s recommendation for plant health care.

In addition to cleaning up winter debris, early spring is the time for “a light raking, cleaning the parking lot, getting rid of sand, and edging beds and along sidewalks,” says Gottschalk. “You also want to assess the turf, look for erosion, salt damage, and damage from dogs.” Once temperatures settle—“when everything wakes up” — it’s time for thinking about the first application of fertilizer, and pre-emergent control to keep weed seeds from germinating. “It won’t help with the weeds you already have, like perennial dandelions, but it will keep new weeds from germinating,” she says.

A pre-cursor to the application, Fish adds, is soil sampling. “You don’t want to go willy-nilly applying lime, for example, if you don’t need it. You can start with a soil test when temperatures warm up to the 50s. Then you can do your spring application of a balanced fertilizer.”

Soil testing, Maloney adds, should be the basis of a turf health care program, but if not requested in the RFP, may not be part of the contract. Some boards, she says, may opt to skip the soil test, thinking it will save money, but, in fact, it is cheaper than an unnecessary lime application.

After assessing the winter damage, landscapers will begin work, too, on trees and shrubs. Spring is the time to take care of broken branches and other damage caused by winter’s heavy hand. But that’s just the beginning. “At a lot of condominium complexes, we do the pruning in three phases,” Cryan says, “doing different plants at different times during the growing season.” For example, privet hedges may be trimmed three or four times a year to keep them looking neat.

And then, of course, come the plantings: new trees or shrubs if needed, and, for that long-awaited burst of color, annuals like pansies, begonias, marigolds and coleus. Gottschalk notes that many communities are moving to more perennials like Black-Eyed Susans and Purple Coneflowers, along with texture-adding grasses, too.

As with all work around a condominium property, it’s best to plan ahead and have contracts signed well in advance of the season.

“Some people like to get the landscapers signed up in September for the next year,” Cryan says. “We typically do multi-year contracts—two, three, four years—and many of them renew in September, at the end of the season.” By spring, he notes, contractors may have a backlog and properties that need work may find themselves scrambling. “You really want to be one season ahead,” Cryan advises, “and multi-year contracts are best, because the year goes by so fast.”

Time does fly, and volunteer condo boards can easily get so caught up in the day-to-day issues that they fail to plan ahead. For example, Cryan received a call in mid-January from an association that doesn’t have a management company. When old members left on December 31 and new members stepped into their posts in January, “the board realized they didn’t have a snow contract signed.” That’s a tough time to find a contractor. “Having a management company really helps,” Cryan suggests.

Knowing how important curb appeal is to a condominium community, boards should think carefully about the kind of care their property needs, and make sure that they’ve covered all the bases when selecting contractors.

“Not all contracts are the same,” Fish cautions. “Property managers and boards should do their homework.”