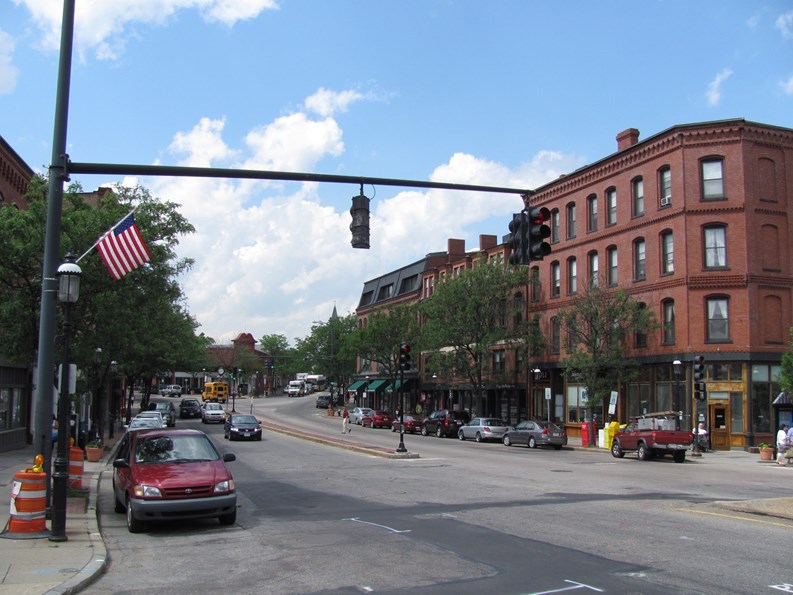 A town with a reputation for the elite, and nearest metropolitan neighbor to Boston, Brookline, Massachusetts is the birthplace of President John Fitzgerald Kennedy, late night comedian Conan O’Brien, and the last home of Pulitzer and Nobel Prize-winning novelist Saul Bellow.

An independent borough in Norfolk County, Brookline has fiercely strived to maintain its independence, even after an attempt early in its history to incorporate it into the city proper that was Boston. That independent streak extended into politics as well. Brookline residents were among the first in the country to propose extending the vote to women. Benjamin F. Butler, in his 1882 campaign for Governor, advocated the idea, which resulted in 1920 with the passage of the 19th amendment.

These days, Brookline is attracting residents with its history, its green spaces, its prime location, and the special distinction that comes with boasting a Brookline address on your driver's license.

Playground for the Rich and Famous

Brookline got its name from the two small rivers that mark the northern and southern borders of the town.  A part of Greater Boston, Brookline borders six of Boston's most populous neighborhoods: Brighton, Allston, Fenway–Kenmore, Mission Hill, Jamaica Plain and West Roxbury. The city of Newton lies to the west of Brookline. As of the 2010 census, Brookline carried a population of approximately 58,732. First settled in 1638 as a hamlet known as Muddy River in Boston, Brookline itself was incorporated as a separate town in 1705.

In the 1870s, the city of Brighton merged with Boston and the Boston-Brookline border was redrawn to connect the Back Bay with Allston-Brighton. This effectively cut off Brookline from the shoreline. Twenty years later, another consolidation led to the Brookline-Boston annexation debate in 1873 that was eventually decided in Brookline's favor, granting it independence from the city of Boston, though it remained smack dab in the middle of it.

Brookline still has one of the highest property tax burdens in the country and was called "the richest town in America" back in the 19th century. The elite of Boston built summer homes in Brook-line—America's oldest country club (appropriately named "The Country Club") is located here. It was the first private club in the U.S. established to provide outdoor activities, primarily golf. When you look at the geography, it's easy to see that Brookline was specifically engineered to be a sanctuary for the wealthy at the time.

So it’s safe to say that Brookline from the start has had a fairly polished reputation. It’s also pretty affluent still today. According to the 2010 Census, the median income for a household in Brookline was $66,711; the median income for a family, $92,993. The per capita income for the town was $44,327. About 4.5% of families and 9.3% of the population were below the poverty line, including 5.3% of those under the age of 18 and 7.5% of those ages 65 and older. It also offers residential housing for nearby academic and medical institutes such as Harvard Medical School and Boston University. In fact, the town of Brookline was reported as the city with the most doctoral degree holders (14 percent of the total population) in the United States. Another report also states that 77 percent of Brookline’s residents have a bachelor’s degree or higher.

The area caters to families, single professionals and those who work downtown or in the universities or medical institutions. While the majority of its residents are white, Asians comprise about 15 percent of the current community, and census statistics note that about 30 percent of the town’s residents speak a language other than English at home.

One of the major benefits of living in Brookline lies in its urban-suburban feel. It has a nice blend of both the city and the country. Frederick Law Olmsted, the father of landscape architecture in the U.S., who created the designs for among other things, New York City’s Central and Prospect Parks, is the architect of Boston’s famed Emerald Necklace, a series of park spaces which surround Brookline.

And green spaces abound here. The Brookline Parks & Recreation website notes that there are over 49 parks and playgrounds in the community, including Amory Park, the Halls Pond Nature Area, and Larz Anderson Park, the largest park in Brookline.

And while you’re there, don’t forget to stop at Coolidge Corner. Coolidge Corner is a pedestrian-friendly town center which is one of two major retail areas. Small coffee shops, pharmacies, independent bookstores, ethnic restaurants, and chain stores have cropped up in the area. Places like The Paris Creperie have a dedicated following.  Additionally, the neighborhoods that run along Beacon Street, around Coolidge Corner, and near Brookline Village tend to have an urban feel, with many apartment and condominium buildings, as well as high-density single- and two-family residential areas. In recent years, new apartment and condominium buildings have been built in the densest Brookline neighborhoods, generating concerns that those areas are losing their character as they become overbuilt.

According to Matt Bless, a realtor broker who founded Vanguard Realty there in 2002, real estate in Brookline is varied, with condos centered in town clustered around the main thoroughfares, and single-family homes in the outskirts of Chestnut Hill, Fisher Hill, Cottage Farm and South Brookline.

There are some affordable units here, but not many co-ops. "I believe there are two co-op buildings in Brookline," says Bless. "It's not a popular form of ownership around here. Most of the large apartment and multifamily buildings in Brookline have been converted to condos, with a huge conversion spree in the mid '80s. Because most Brookline buyers are unfamiliar with co-op ownership—and many agents, too—I think there is actually a price penalty for identical units that happen to be co-ops rather than condos. I think there is also a general impression is that co-op boards exert too much control over owners and that prospect is unsettling for buyers."

The condo situation is much different, however. Prices range from about $269,000 for around a 400-square-foot apartment in Coolidge Corner to upwards of $6 million for an entire six-family building.  According to the Warren Group, a real estate trade publisher, in 2015, the median condo price in Massachusetts topped out at $320,000 compared to $342,000 for single-family homes. In Suffolk County, which Boston dominates, condos now actually top single-family homes in price. The median price of a condo in Boston and neighboring cities like Revere and Chelsea rose more than 9 percent last year to nearly $490,000. Most single family homes in Brookline will price in at about $1.45 million and up.

If you're looking for a touch of Americana with an urban and suburban feel, Brookline may be a perfect fit.