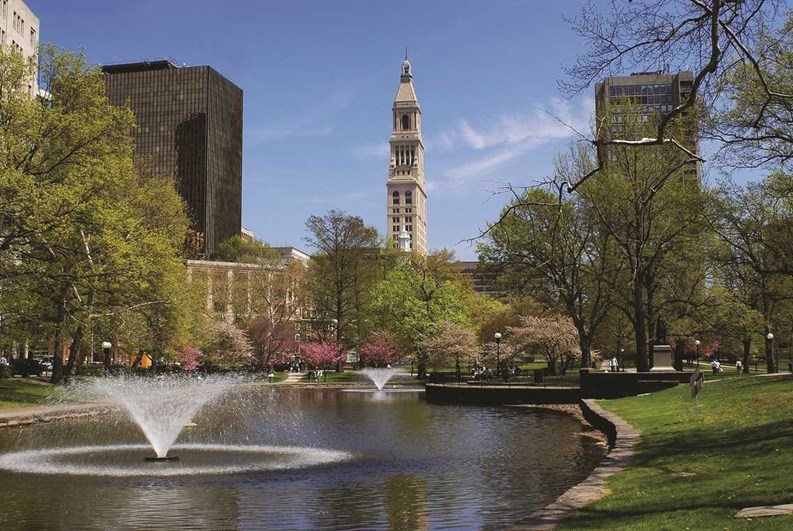 Hartford, Connecticut’s fourth largest city, behind Bridgeport, New Haven and Stamford, is perhaps best known for the number of insurance companies housed there, but it was also the home of Samuel L. Clemens, Harriet Beecher Stowe, and The Courant, the oldest continuously published newspaper in the country.

Nicknamed the “Insurance Capital of the World,” Hartford houses dozens of insurance company headquarters, and insurance remains the region’s major industry. Almost 400 years old, Hartford is among the oldest cities in the United States, and one of the earliest settlements in the Nutmeg State, dating all the way back to 1637.

It may seem like an anomaly today, considering how poor it is, but following the American Civil War, Hartford was actually the wealthiest city in the United States, a stature that lasted for several decades. In 1868, resident author and humorist Mark Twain wrote before he died, “Of all the beautiful towns it has been my fortune to see this is the chief.” Today, Hartford is one of the poorest cities in the nation with 3 out of every 10 families living below the poverty line.

Historically, Hartford has been the international center of the insurance industry, with companies such as Travelers, Aetna, The Hartford, The Phoenix Companies, UnitedHealthcare and Hartford Steam Boiler based in the city, and companies such as Lincoln National Corporation having major operations there. The corporate headquarters of U.S. Fire Arms and United Technologies are also there.

Its history during the Industrial Revolution made it a major manufacturing city, but over the years, most Northeastern manufacturing facilities and factories closed, relocated or reduced operations. Many of the insurers, too, left for the Hartford suburbs in search of better amenities, rents, and tax breaks over and above the city’s current tax structure. MetLife, for example, vacated several floors in CityPlace, Connecticut's largest office building, and joined CIGNA in a large suburban campus in Bloomfield. Lincoln Financial cut its Hartford workforce while Travelers built a training complex in Windsor, just north of Hartford. Other insurers such as MassMutual and The Hartford followed suit going outside the city. However, despite the flight to suburbia, Aetna and Northeast Utilities have returned their operations to downtown Hartford.

Early History and the Charter Oak

Hartford began when Dutch explorer Adriaen Block visited the area in 1614, and fur traders from the New Netherland colony set up trade at Fort Goede Hoop (Good Hope) at the confluence of the Connecticut and Park Rivers early in 1623. That post was abandoned soon after but the neighborhood still exists and is called Dutch Point. The first English settlers arrived in 1635 and their settlement—originally called Newtown—was renamed Hartford two years later. The name was chosen to honor the English town of Hertford in Hertfordshire, home of Samuel Stone, one of the settlers. One of the original Massachusetts settlers, the Reverend Thomas Hooker, delivered a sermon inspiring the writing of one of the earliest political charters, The Fundamental Orders of Connecticut (ratified January 14, 1639). This document in turn formed the foundation of the Connecticut Constitution, hence the nickname of The Constitution State. Legend has it that the Connecticut charter of 1662, was hidden in a large white oak tree—the Charter Oak—to prevent its confiscation by the English governor general.

Hartford has had its share of natural disasters. In April 1909, the Connecticut River reached record flood stage, and several hurricanes also inflicted major damage over the years—the great New England hurricane of 1938, the Connecticut Flood of 1955 and Hurricane Irene in August 2011.

Known as the worst disaster in the city’s history and the deadliest circus fire on record, on July 6, 1944, a suspicious fire destroyed the big top at the Ringling Bros. and Barnum & Bailey Circus, killing 168 (mostly children) and injuring nearly 700 people among the 7,000 in attendance. The casualties from the fire may have been aided by the circus organizers coating the tent with paraffin wax and a mixture of kerosene and gasoline, which was a common waterproofing method at the time. When flames started riding up the sidewall of the tent, the structure was consumed within minutes and collapsed—raining fire and debris, and trapping the stampeding spectators inside.

For years there was controversy about the fire: who started it and why, and the mystery of one of its tiniest victims, Little Miss 1565, an eight-year-old girl, who was never positively identified, although she had few burns and her face was unmarked. In 2001, Hartford Fire Lt. Rick Davey, a seasoned arson investigator on the case, wrote a book about the fire, having convinced the Connecticut medical examiner that the girl was in fact Eleanor Cook, a youngster from Massachusetts, whose brother Edward died and mother Mildred was injured in the fire. Not everyone believes, though, that the 60-year-old mystery has been solved. An Ohio circus hand originally confessed to having started the blaze but later recanted his testimony, dying in 1997 after having served more than 40 years in prison for arson crimes.

As the suburbs of Hartford grew in the late 1950s, the capital city went into a long period of decline with a burgeoning crime rate. The late 1980s saw some revitalization, and after a thaw, housing construction has rebounded lately. The residential part of Adriaen’s Landing, a state- and privately-funded project on the banks of the Connecticut River, has yet to be built, according to a decades-old development plan. New condo projects include the 36-story Hartford 21 (232 luxury apartments); the 11-story, Trumbull on the Park and 55 on the Park, consisting of apartments along Bushnell Park. The Sage Allen department store was converted into 44 townhomes; The Metropolitan, the former Hartford Electric Light Company Building on Pearl Street is being converted into luxury condominiums; and the former American Airlines Building in the downtown is also being converted into apartments with renovated ground-level retail space.

Some attractions include the historic homes of Mark Twain, abolitionist Harriet Beecher Stowe, Armsmear, the former Samuel Colt estate and the Colt Armory, the University of Hartford, Trinity College and St. Joseph College. Bushnell Park, designed by Jacob Weidenmann, happens to be the first park in the country purchased by a municipality for public use. The Old State House, dating back to 1796, makes it one of the nation's oldest. It was designed by Charles Bulfinch, who later went on to design the Massachusetts State House in Boston. Other attractions include Constitution Plaza, a mixed use office and retail center, the Cesar Pelli-designed museum, the Connecticut Science Center; and the 540,000-square-foot Connecticut Convention Center. The Wadsworth Atheneum is the oldest museum of art in the country. The nationally-ranked University of Connecticut Huskies men’s and women’s basketball teams play their home games at the XL Center in downtown and on-campus at Gampel Pavilion in nearby Storrs.

The New Haven – Hartford – Springfield commuter rail line (officially named The Knowledge Corridor Intercity Rail Line) is expected to be operational during 2015. According to Governor Dannel Malloy, the Knowledge Corridor line will reach speeds up to 110 mph to unite the densely populated, 61-mile region between Hartford, Springfield and New Haven. Among notable residents, writers Dominick Dunne, Suzanne Collins and John Gregory Dunne all resided in Hartford. Radio shock jock Howard Stern, broadcasters Bill O’Reilly and Gayle King all got their starts in the local market. Actors and actresses that were born or lived in Hartford during their careers include Katherine Hepburn, Linda Evans, Eriq LaSalle, William Gillette, Charles Nelson Reilly, and TV producer and writer Norman Lear.

Debra A. Estock is executive editor of New England Condominium and a Connecticut resident.