Do not show again [X]
By Jennifer Grosser   2011 August Neighborhoods 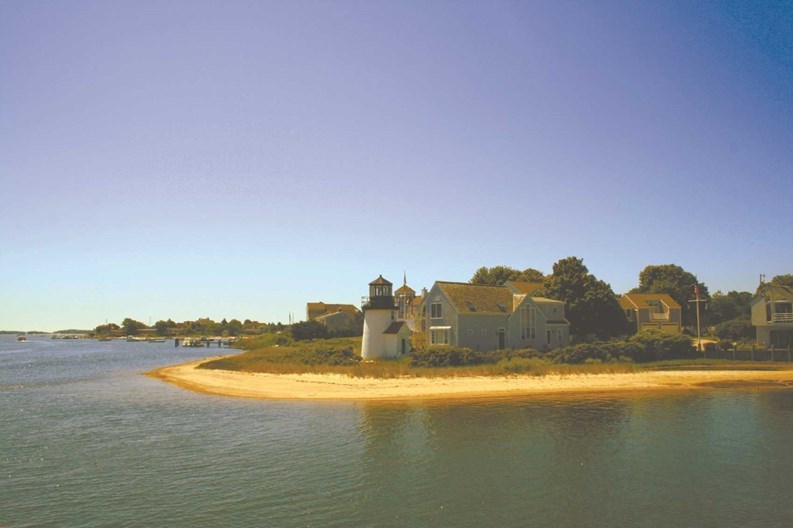 Rather in the manner of Russian folk-art nesting dolls, the village of Hyannis  nests within the town of Barnstable, within Barnstable County, within the  region of Cape Cod, within the state of Massachusetts. In one sense,  generalizations could be made about the village through its association with  the entities it helps to make up. In another, however, the village is certainly  its own place, with subdivisions in its own right and a lot to offer the  occasional visitor, the returning regular, and the full-time resident.

A Name of Its Own

Named after Iyanough, a Cummaquid sachem, Hyannis is the business hub of the  town of Barnstable, and is more often named in reference to the general area  than is Barnstable, the town which serves as the county seat. Geoff Converse,  marketing director of the Hyannis Area Chamber of Commerce (the name of which  proves the last point) says, “We’re where the trains come in, where the planes come in, where the buses come in.  We have the mall . . . and two harbors.”

They also have the Kennedys. Hyannis has been the Kennedy family summer haven  for more than 70 years. This fact alone makes Hyannis a major tourist  destination, not just for Americans, but for European tourists, particularly  people from the United Kingdom and Germany. The John F. Kennedy Hyannis Museum  is a popular tourist destination for those wishing to catch a glimpse of the  unofficial lives of America’s so-called “royalty.” The museum’s focus avoids the formality of JFK’s life in Washington and instead displays his sailing paraphernalia and other  ways he and the family spent their time in Hyannis.

As in many such communities, the population varies drastically depending on the  season. Converse estimates that in the summer months at any one time, the  population explodes 300%. “It’s a great spot,” he says. “It’s New England’s tourist getaway. It’s older—we’re not a ‘new trip’ destination—not like Florida, with tons of new hotels on the beach. Cape Cod has maintained  its natural feel and quaintness. Sure,” he adds with typical New England candor, “it takes ten minutes longer to get somewhere. So—leave ten minutes early.”

In spite of its being the regional business hub, however, from the sound of  things, Hyannis is not a place where people go to be hurried in any case. “It’s charming,” Converse asserts. “You’re two minutes from the harbor, two minutes from Main Street. There are  thirty-two restaurants right up and down Main Street.” One of these, The Eclectic Café, was featured on the “Live with Regis and Kelly” TV show in 2010. Fishing boats come in and out of the harbor, and cruises and  charters and sport fishing are available to visitors, while a ferry shuttles  explorers across the sound to Martha’s Vineyard. On the mainland, Hyannis provides easy access to over a hundred  miles of beaches. Much of the natural surroundings are conservation areas, with  pathways and trails and a wildlife sanctuary. Like so many seaside towns,  Hyannis also has a thriving arts and culture community, with many art galleries  as well as the Cape Cod Symphony Orchestra, the Cape Playhouse and even the  Toad Hall Classic Sports Car Collection.