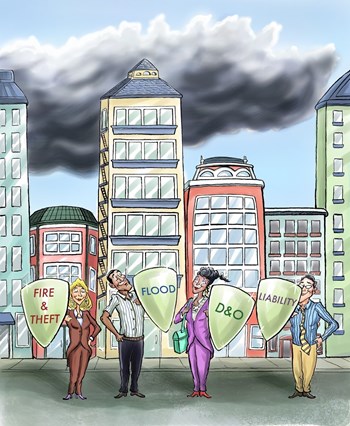 It sits quietly in your condo association’s insurance package, unremarkable next to the fire, flood and other forms of  mayhem that make insurance policies necessary fixtures in association budgets.

Looking at the file labeled “directors and officers” (D & O) insurance, new members on association boards may wonder exactly when or how  D & O insurance would ever be utilized. Compared to all the risks of property  damage, it may seem like an superfluous add-on, but D & O may be the one insurance product that gets the most use. All it takes is one  disgruntled unit owner who decides to take a complaint to court.

Even when residents’ complaints may seem frivolous or downright wacky, they can provoke a court  action, and the target is likely to be unsuspecting volunteers serving on a  board of directors. “Nowadays, [the use of D&O insurance] happens all the time, whether it’s over rules enforcement, fiduciary duties, discrimination… it can be anything,” reports Attorney Charlie Perkins of the law firm Perkins & Anctil, PC, in Westford, Massachusetts. “I don’t know why anyone would volunteer on a board without it.”

He notes that even though the vast majority of these cases reach a settlement  and never make it to court, “the D & O insurance covers the costs of defense.”

Joel W. Meskin, Esq., CIRMS, vice president of community association products at  McGowan Program Administrators in Fairview Park, Ohio, recalls a case that had  to do with service animals. “There was a unit owner in a high-rise condominium, who was warned that she had  too many dogs—in violation of the condo rules. She had a note from her psychiatrist saying she  needed to keep ten poodles… as companion animals. She sued the association board for failing to provide her  with a reasonable accommodation.”

Explaining their motivations, Meskin relates that “the reasons people choose [to live in] condo communities are to protect their  assets and to protect, or maintain, a particular lifestyle. In most cases, when  a unit owner sues, they’re simply trying to get the board or property manager to do—or not do—something. That’s why the majority of claims are non-monetary… and why very few go to trial, maybe one or two percent.”

Meskin points out that in community associations, volunteers with no training  become directors or trustees. “Sometimes,” he notes, “new board members enforce a rule that wasn’t previously enforced, and it could be viewed as discrimination. We see a lot of  discrimination claims, now… also defamation claims, with the onslaught of web information and social  networks. There are issues because people are sending stuff up [online] before  thinking about it.”

Other charges that board members may face include “wrongful foreclosures.” Meskin says, “When a unit owner, facing foreclosure, is not paying condo fees, the association  has the right to collect them.” The unit owner might try to find an excuse not to pay fees, such as accusing  the association of withholding maintenance or repairs. Suits and counter-suits  can multiply, he adds, getting even more complicated when vendors are involved  and there’s a breach of third-party contracts.

These kinds of extended lawsuits that drag in management staff and vendors  illustrate the need for other insurance protections, especially “errors and omissions.” This is protection from claims when trustees or managers are held responsible  for errors, or the failure of work that was performed. As Perkins describes it,  “E & O is malpractice insurance for the management company.” He adds that vendors, especially the contractors hired by management to do  maintenance and repairs on property, “carry their own general liability insurance,” but that’s only covering the contractor.

Association boards can opt for E & O coverage that includes a broad spectrum of protection, such as all legal  defense costs [even on frivolous allegations]; any resulting judgments—up to the coverage limits on the policy, as well as the mistakes of specific  employees and independent contractors.

Perkins notes that this year, a big source of complaints—and resulting legal action and potential use of E & O insurance—was “people complaining that they had ice dams on the roof” and consequent leaks in ceilings and walls. He contends that it was an unusual,  weather-driven event that disappeared, for the most part, when the ice melted.  But as a legal issue, he adds, “It gathered speed in some cases, when mold became a problem.” Even without extreme weather, he says that residents have been known to file  complaints because “maintenance was not kept up on the roof or the deck… and it can be a group of unit owners, or a single resident” who press charges.

Mistakes that could be made by an association’s management staff tend to be the main reason for adding E & O to an insurance portfolio, agrees Bernie Gitlin, president/CEO of Global  Insurance Network in Needham, Massachusetts. “We hope that all property managers have it,” he states. “It will cover the PM’s professional liability… like if the person makes a mistake in accounting and the association has to pay  a fine, or extra payment of some sort,” then the E & O policy would cover it.

Gitlin warns that “there are all kinds of D & O or E & O policies that get embedded into the regular package policies of an  association—and in the package policy it’s cheaper—but these are usually not as good as separate ones would be.” Adding broader D & O and E & O is not that costly, Gitlin maintains, considering that “there could be significant differences [in coverage].”

The bottom line with these insurance products, notes Gitlin, is that “if you don’t have it, unit owners can sue board members individually…The coverage is to fund indemnification of board members. Even though few cases  actually make it to a courtroom, suits can drag on for years. It depends on the  unit owners’ deep pockets or the strength of their convictions.

“To get decent people to serve on these boards, you’ve got to protect them,” he says. In addition, clear definitions, he notes, “are a most important part of D & O insurance, specifying ‘what an insured is,’ besides officers and directors. What about past officers, or volunteers or  committee members?” The wording in policies must anticipate complaints that can reach back in time.

As an example of a board action that became a legal battle, Gitlin recalls a  case in a Massachusetts multi-story condo building. “The unit owner made a request to the board, to allow him to extend his unit’s outdoor deck. The board allowed the addition, but didn’t realize it altered the view of the unit owner below. There was a big to-do  about it, and the board ordered the first owner to take the deck down, but he  refused. Then both unit owners sued the board… There were tons of cash spent in legal fees.” Gitlin recalls that a court finally ordered the deck addition to be taken down.

In a similar case, Gitlin notes, a unit owner had gotten the board’s permission to cut down a tree. This action didn’t sit well with a neighboring unit owner who didn’t want to lose the “aesthetically pleasing” foliage and “sued the board… to replace the tree.”

Lawsuits over aesthetics and lifestyles can have infinite applications, as  Meskin relates. “I’ve seen challenges to [a board’s] architectural review when a unit owner wants to do something not allowed by  the design committee or the condo docs, such as [exterior] paint color or the  addition or elimination of a deck. Owners will sue to challenge enforcement of  the community’s rules… or the rules themselves.”

Unit owners have been known to sue over condo regulations that they interpreted  as human rights violations. Citing recent cases, Perkins says that  discrimination has become a major reason for unit owners to sue association  boards. “We have seen residents who disagree with board members regarding common areas… A big battleground is the use of common areas for [kids to] play. We just had a  case where discrimination against children was alleged,” he states, stemming from rules governing the outdoor spaces at a particular  property.

Avoiding Court Can Benefit Everyone

Actually having to appear in court is a last resort for both a plaintiff and  defendant. In resolving disputes, it’s the most expensive, time-consuming process—and someone always loses. Directors, trustees, managers, and their insurance  companies, instead might engage the use of “alternative dispute resolution,” states Meskin, when someone threatens to press charges.

In ADR, everyone involved in the complaint has more control--both in the process  and in the outcome. Typically, there is more opportunity for everybody to tell  their side of the story. Using mediation, parties can be more creative and  flexible, finding resolutions that are not available in a trial. Also,  technical experts may be brought in. Using ADR can help complainants achieve  their real goals in more of a win-win situation. ADR is a less hostile way to  resolve a dispute, which is an important advantage in a community association  where those involved have to continue their relationship—hopefully in a peaceful manner.

“Some states even require ADR as an administrative remedy—before going to court,” Meskin notes. Just as it is usually in the interest of insurance companies to  arbitrate and settle out of court, it is also in the interest of community  boards and management to maintain adequate, comprehensive insurance. Even  without going to court, even with a weak or frivolous case, associated legal  costs should not be a threat that discourages association boards or staff.