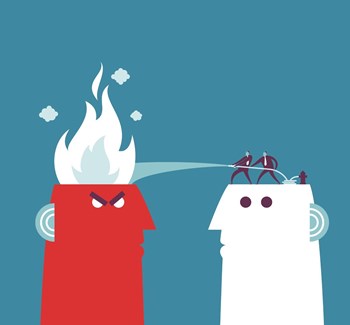 With dozens—sometimes hundreds—of people living in a community governed by neighbors, acquaintances and friends, it should be no surprise that disputes occasionally arise in condo buildings. The possibility of disagreements among residents, boards and even vendors is there, and when those disagreements arise, the specter of litigation can loom large over the affected parties, creating worries about costs—both financial and in terms of time—as well as concerns of bad feelings and an uncomfortable environment for the community as a whole. There are plenty of reasons to find other ways to settle disputes before getting lawyered up and going to court.

Fortunately, alternative dispute resolution (often called simply ADR) offers two options—mediation and arbitration—for settling and moving on from issues. Both are effective and can help unit owners and boards resolve thorny issues without either party ever setting foot before a judge. And in certain parts of New England, including Vermont, according to Jack Facey, a shareholder attorney with Kenland, Schwiebert, Facey & Goss, P.C. in Rutland, court rules require that parties go through a non-binding mediation process, and only if it’s unsuccessful can they then proceed to the Superior Court.

Although just about any incident can spark a conflict in a close-knit community, there are some that happen more often than others, says Jeffrey T. Zaino, Esq., vice president of the New York-based American Arbitration Association (AAA). While disputes do arise between individual shareholders or condominium unit owners, “the most common disputes in condominiums,” he adds, “are between unit owners and board members; and in co-ops, between shareholders and board members.”

The issues at the root of these conflicts vary widely., depending on the nature of the community. Attorney Pat Brady, a partner with the law firm of Marcus, Errico, Emmer & Brooks, PC, in Braintree, Massachusetts, cites noise and smoking as predominant factors that lead to dispute. “Those are the two big ones, because they come with such judgment,” he says. “One of the main problems that community dwellers encounter is, what would be the normal level of noise that one should expect to encounter in a condo, and what level rises to that of offense or nuisance? Some people can be super sensitive, and then you need to assess the duty of the board when there’s a noise complaint. The board should never take a side, but act to mediate, unless the violation is clear.”

Facey, whose firm mostly represents second-home developments in its corner of New England, doesn’t encounter as many of the personality-driven disputes that can erupt among neighbors in close quarters.

“In my experience in North Vermont, where there are severe weather and maintenance issues, the biggest conflicts seem to revolve around owners who are dissatisfied with maintenance levels that the owners’ association is providing for their particular unit,” he says. “Intense snowfall in the northeast last winter resulted in roof leaks, and, if an association has, say 50 units, the owner who gets treated last may take umbrage—even though someone always has to go last.” In addition to maintenance issues, Facey includes pet-related disputes as an occasional source of grief.

So let’s turn back to the subject of alternative dispute resolution—ADR—mentioned earlier. When a problem arises and all parties involved fail to find a resolution, the first thought is often litigation, with one or both sides threatening to take the other to court—a very expensive first step. Fortunately, mediation and arbitration offer very effective alternatives.

Although both mediation and arbitration are methods of ADR, they are very different. “In mediation, the mediator doesn’t take a position in regard to who is right or wrong,” says Brady. “He or she attempts to solve the problem so that both parties reach a mutually agreeable resolution. In arbitration, the third party acts more like a judge; the arbiter will generally make a final decision instead of having a judge weigh in. Ideally, the arbiter has some expertise in the field, so that, while a judge may not be up on all condo law, an arbiter that specializes in condos may be both cheaper and more efficient.”

“Mediation is less formal than arbitration and is non-binding,” Zaino says. “Also, ex parte communication is permitted with mediations.” Ex parte communication means someone who is a party to the case or someone involved with a party can communicate with the mediator. Another difference is that “arbitration is binding and decisions of arbitrators are difficult to vacate,” says Zaino. “There is a very high legal standard for vacatur,” which is an order of the court vacating a legal proceeding.

How it All Works

The process of mediation may seem mysterious; it is not usually the subject of network television shows, lacking the tension of high profile court cases. It is, though, a highly effective and efficient method for getting to the bottom of a disagreement.

Then the homework begins. “Typically, a mediator will review advance submissions by the parties, a summary of their positions,” says Zaino. Then, the interested parties have their opportunities to share their perspectives on the conflict. “The mediator will meet with the parties to discuss their positions and will caucus with them individually to provide them with his or her personal insights and recommendations.”

After the mediator hears all the discussions and offers a recommendation, the matter can be settled—if everyone agrees. “If the parties reach a settlement during the mediation session, they should draft the settlement agreement and sign it at that time,” Zaino says. “At that point, a binding contract is created.”

Arbitration is different in that “arbitration is a creature of contract or submission,” says Zaino. “The normal process involves the parties receiving a list of approximately ten names and biographical information on the arbitrators. The parties strike and rank the list, leaving as many names as possible. The lists are not exchanged but submitted directly to the neutral provider that sees if the parties mutually agree on someone.”

“The arbitrator acts more like a judge in this process, in comparison to mediation,” says Zaino. “The arbitrator will swear in witnesses and hear arguments from each side. The process, however, is far less formal than litigation and the rules of evidence need not apply. There can be no ex-parte communication. When the evidentiary hearings conclude, the arbitrator will draft an award and issue within 14 or 30 days. The award can be reasoned if the parties request that.”

The Effectiveness of ADR

Mediation tends to be a positive and effective avenue for resolving issues for individuals involved with condo-based disagreements. “Alternative dispute can be good because people can discuss their issues and emerge with a resolution that works for everyone, from neighbor to neighbor or board to unit owner,” says Brady.

According to Zaino, mediation also can be effective on a larger scale. Following Hurricane Sandy, the Storm Sandy Mediation Program run by the American Arbitration Association handled more than 3,000 mediations between the insured and insurance companies.

Another added benefit for both sides is the cost savings that stem from ADR. “ADR is far less expensive than litigation,” says Zaino. Rather than having an attorney represent the parties involved, “you can represent yourself with all ADR methods and discovery is limited,” Zaino says. “The hourly rates for a mediator or arbitrator range from $250 to $600 per hour. Small disputes should only take a few hours.”

Ultimately, if all parties involved can agree to commit to alternative dispute resolution, “it is very effective with respect to both time and cost,” says Zaino. “If parties sit down for a mediation session, there is an 85 percent chance that the case will settle.”

Those are good odds, especially when the other available option can be so expensive and time consuming. Mediation and arbitration can get to the heart of the matter quickly, efficiently and effectively, helping resolve disagreements in ways that can satisfy all parties involved and rectify situations that could escalate without warning. With the help of unbiased third parties, a willingness to talk and work toward a solution can benefit all involved.