Do not show again [X]
By Debra A. Estock   2013 August Neighborhoods 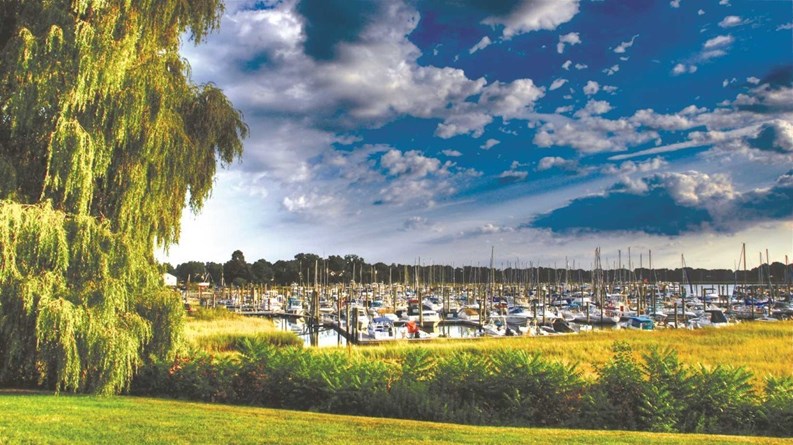 Branford, a shoreline town located on Long Island Sound in New Haven County, has the best of both worlds, proximity to the ocean and the mountainous ridges of Central Connecticut. Once renowned as a summer resort community where the wealthy like Greta Garbo, Rudy Vallee and Sinclair Lewis stayed and played, cool summer breezes still attract hordes of visitors to its beaches and islands.

Eight miles east of New Haven and one of the earliest settlements in the Nutmeg State, the population was 28,026 as of the 2010 census.

Branford's origins started long before any European settlements. The area was settled by Native Americans who named the area Totoket, which means place of the tidal river. About 1635, Sachem Montowese had inherited Totoket from his mother who was a Quinnipiac Indian of chiefly lineage. Although his mother was a Quinnipiac, his father, Sowheage, was the mighty sachem or the chief of the Mattabesec Indians, whose land stretched northward to Middletown and beyond. Possession of Totoket by the tribes enabled the inland Indians access to the Sound to obtain seafood, to collect shells for making wampum, and to trade with Europeans.

A group of English settlers from nearby Wethersfield came around 1644, purchasing the land some years earlier from the Mattabesec Indians for “eleven coats of trucking cloth and one coat of English cloth.” They settled the town and renamed it Branford after the town of Brentford in Middlesex County, England.

Soon the area became a much sought-after resort community as settlements grew up around Stony Creek, Indian Neck and Pine Orchard. Branford’s summer resort era began before the Civil War and reached its peak by World War I. As many as 20 summer hotels sprung up on the Branford shoreline as visitors spent from a few days to the whole summer at the seashore.