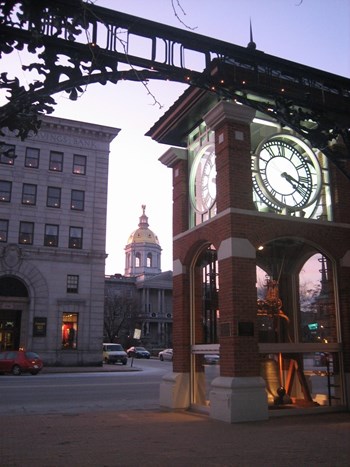 The city is also home to the University of New Hampshire School of Law, the  private preparatory school St. Paul’s and New Hampshire Technical Institute. Concord is comprised of the villages of  Penacook, East Concord and West Concord. The town is around a 25-minute drive  from Manchester airport, an hour drive from Boston and about four hours from  New York City.

In 1659, the area’s first settlement was named Pennacook after the Indian name Pannukog, meaning  crooked place. The town was incorporated in 1733 as Rumford, but the name was  later changed to Concord in 1765. In 1790, when the first census was taken, the population was 1,747.

In 1807, lawyer Samuel Blodget opened a canal with a lock system to allow  vessels passage around Amoskeag Falls downriver, connecting Concord with Boston  by way of the Middlesex Canal.

The following year Concord was named the state capital, even though the town of  Salisbury offered $7,000 for the honor. In 1816, construction on the state  house began by architect Stuart Park. The Greek Revival-style building with a  gold leafed dome is outfitted with smooth granite blocks that were cut and  shaped by inmates of the local prison.

At the opening ceremonies two years later a huge gold-painted eagle was raised  to the top of the dome as Governor William Plumer presided over a series of  toasts, one of which was, “The American Eagle. May the shadow of his wings protect every acre of our united  continent and the lightning of his eye flash terror and defeat through the  ranks of our enemies.”

The building’s approximate cost was $82,000, a princely sum for that time. The structure was  designed to house the General Court, the Governor and Council, the Secretary of  State, the State Treasurer, and the State Library. Today it is the oldest state Capitol in which a legislature still meets in its  original chambers.

Throughout the 18th century, Concord grew in prominence and the city became  known primarily for furniture making and granite quarrying. In 1828, Lewis  Downing joined J. Stephens Abbot to form Abbot-Downing Coaches. Their most  famous coach was the Concord Coach, modeled after the coronation coach of King  George III. The Abbott Downing Company employed thorough braces under their  stagecoaches which gave the ride of the stagecoaches a swinging motion instead  of the jolting up and down of spring suspension. Novelist and humorist Mark  Twain once stated that the Concord Stagecoach was like a cradle on wheels.

Sometime during the 19th century, the city became a hub for the railroad  industry, with Penacook, a textile manufacturing center using water power from  the Contoocock River.

Today, the city is a center for health care and several insurance companies. It  is also home to Concord Litho, one of the largest independently-owned  commercial printing companies in the country.

Concord is slowly becoming an artist-enclave. The Capitol Center for The  Performing Arts features live music, dance and theater performances. The SNOB  (somewhat north of Boston) Film Festival, started in 2002, and is a showcase  for independent and local filmmakers to show their work. Downtown Concord is  also home to half a dozen art galleries that displays fine art, crafts and  special exhibits.

The Capital Region offers you enough things to do and see that you could easily  spend a lifetime. Antiques, skiing, hiking, wildlife, canoeing, art galleries,  museums, historic sites, walking tours, farms, orchards, golf, country fairs,  community suppers, youth activities and four beautiful seasons are part of the  many features that enhance the quality of life in the area. The successful  turnaround of a fading Main Street into an active hub of community activities,  commerce, politics and entertainment was the result of mutual support by the  city, businesses and the community.

Other sites of interest include the McAuliffe-Shepard Discovery Center, a  planetarium named after Christa McAuliffe, the Concord teacher who was killed  during the Space Shuttle Challenger disaster in1986. The center focuses on  astronomy, aviation, earth and space sciences and features interactive  exhibits. The Concord Museum, the DeCordova Museum and Gropius House, a museum  that showcases 20th century Bauhaus architecture and landscape are also worth  exploring. Besides McAuliffe, other notables born in Concord include San  Francisco Giants’ baseball general manager Brian Sabean; Franklin Pierce, the 14th U.S.  President; Mary Baker Eddy, founder of the Church of Christ Scientist; and  former baseball pitcher Bob Tewksbury.

Slightly north of Concord you will find the well-preserved Canterbury Shaker  Village, which was founded by the Shaker religious community around 1810. The village offers a rare glimpse into how Shakers lived over 200 years ago.  Visitors can take a step back in time and visit 24 original buildings situated  on a rolling hilltop, take a guided tour that will introduce the customs,  inventions, furniture, architecture, and values of the society and watch crafts  being made in the Shaker tradition and browse in the gift shop that carries  Shaker reproduction furniture, an extensive collection of Shaker books, tapes  and crafts.

Foodies won’t be disappointed in Concord’s culinary scene. Locals flock to the Barley House restaurant that serves up an impressive  collection of local micro-brews and tasty pub food. The eatery was recently  voted as having the best burger in New Hampshire. You’ll also find an Irish breakfast buffet, as well as a wide selection of  restaurants dishing out fresh, local seafood, and ethnic fare such as Japanese,  Italian and Mexican.

And if you’re in the mood to cook, the indoor winter farmer’s market is sure not to disappoint. In the sprawling market you can pick up  pasture-raised chicken, duck, beef, venison and elk, raw milk, eggs, cheeses,  nuts, homemade soaps from local farmers and artisans.

From food to culture to leisurely hikes, all year round, there’s plenty of activity in Concord, New Hampshire.

Christy Smith-Sloman is a staff writer and contributor to New England  Condominium.