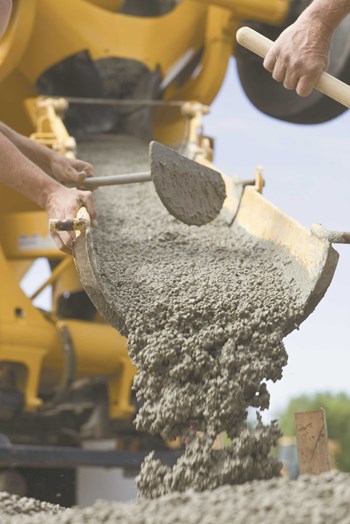 Freezing, thawing and deicing undoubtedly take their toll on concrete during typically harsh New England winters. Corrosion of concrete is an issue in the Northeast, and homeowner associations need to ensure that the concrete forming their sidewalks, pavement and parking lots, as well as walkways and balconies, is properly installed and maintained.

Concrete is a mixture of four basic components: rock, sand, cement and water. A concrete mixture is similar to cake mixes, said Greg Stratis, manager of Shea Concrete Products in Wilmington, Massachusetts. “You can go down a supermarket aisle and see many different recipes. With concrete mixture, it depends on the application of where it is being used.”

“If you are looking for a product that can handle heavier car or truck traffic, concrete is the best product,” he said. “The only other product that you would consider would be asphalt. Concrete would be better because if the sub-base beneath it crumbles, it won’t deteriorate they way asphalt would. Asphalt relies a lot on the prep work for its strength whereas concrete doesn’t.”

“Concrete is by far and away the best product for heavy duty pavement applications,” said Jon Kuell, executive director of the Northern New England Concrete Promotion Association in South Portland, Maine. “As far as strength and durability, concrete has no equal.”

Dan Clark, president of the New England Chapter of the International Concrete Repair Institute (ICRI) in Woburn, Massachusetts agrees. “Concrete offers the highest compressive strength for a pavement surface. Concrete has the strength to deal with the incredible point loads that come from tires as trucks and heavy vehicles turn and maneuver,” he said. “You will notice that at airports, freight terminals, and the receiving areas of your favorite box stores the pavement of choice is concrete. Concrete is subject to expansion and contraction based on temperature and exposure to sunlight, as is any paved surface. The benefit to using concrete is that the surface of your concrete pavement does not soften and lose its strength from this exposure.”