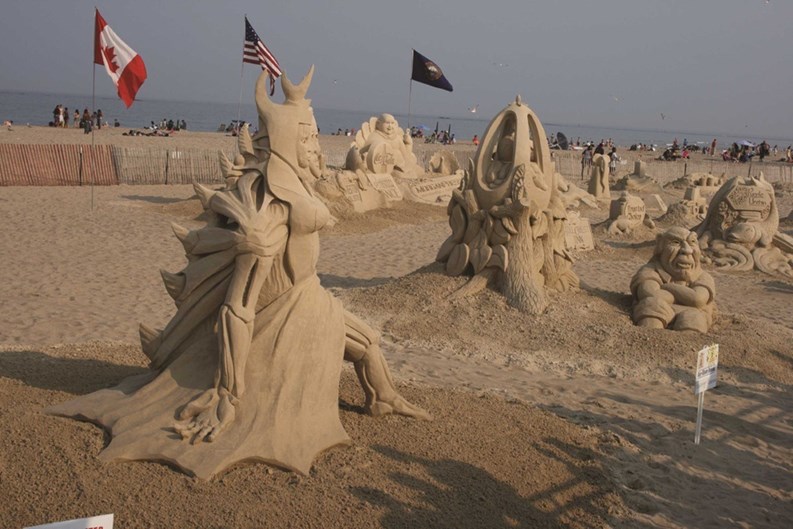 Expect to find a sandy white beach, swimming pools, music venues, parks, bars, a  plethora of restaurants, a thriving nightlife scene and a seafood festival that  draws over 150,000 in the village district of Hampton Beach, New Hampshire.

The resort town of Hampton Beach is located on the Atlantic shoreline  approximately fifteen miles south of Portsmouth and less than two hours from  Boston. Hampton is on the Eastern spur of the Boston & Maine Railroad and was named one of the four “Superstar” beaches in the U.S. in 2011 after receiving perfect water quality testing  results in the past three years. This popular beach resort has drawn billions  of visitors over the last century and continues to be a popular destination for  New Englanders and Canadians alike.

In the early 1600s, Native Americans, primarily the Pennacooks, spent their  summers camping in the area now known as Hampton Beach. The tribe spent the  bulk of their time fishing and planting beans and corn in the rich, upland  meadows. After the harvest, as the winter set in, they moved inland and spent  their winters hunting. Numerous Pennacook relics and artifacts were later found  in the nearby Taylor River.

English Puritans began migrating in the area around 1638 led by Rev. Stephen  Bachiler, who named the area Hampton. The new settlers were drawn to the area  by the lush, salt meadows which were ideal conditions to raise cattle.

By 1647, more than 90% of the Pennacooks succumbed to Typhus and other unknown  diseases as their contact with the European colonists grew. Meanwhile Bachiler  was forced to leave Hampton due to unfounded charges of scandalous behavior but  he was later reinstated. To this day, descendants of the Rev. Bachiler remain  residents of Hampton Beach.

Due to its isolation from other New Hampshire towns, Hampton residents were  closely allied with the puritans of Massachusetts. As a result, Hampton Beach  gained notoriety as the only town in New Hampshire to bring women to trial for  witchcraft. Eunice Cole, also known as Goody Cole, was jailed several times as  a witch and for having “a familiarity with the devil.” When she died in 1680, she was hastily buried in an unmarked grave in Hampton.  The exact location of Cole’s grave remains unknown to this day.

By the mid 1800s, a railroad connection and a trolley line made Hampton Beach  one of the most popular summer resort destinations on the East Coast. It was  now possible for tourists to effortlessly travel from the city to stay in one  of the hotels in town or at the beach and to enjoy the white, sandy beach,  restaurants and shops that were scattered across town. Early beach visitors  came by train to the depot in the Village then were driven to the beach in  horse-drawn wagons.

The Union House, later renamed the Hotel Whittier, was the first new hotel to be  built to accommodate the growing number of visitors. Around this time in the  1850s, the area Native Americans continued to camp out on the beach and Hampton  Beach was still a thriving farm community.

On July 15, 1899, the Hampton Beach Casino Ballroom was opened by Wallace D.  Lovell, who also owned the Exeter, Hampton and Amesbury Street Railway Company  with hopes of bringing more tourism into Hampton Beach. He succeeded. The new  owners eventually expanded the facility to hold 20,000 people and the Casino  Ballroom boasted the largest dance floor in New England. The thriving venue  would go on to host musical acts such as Bing Crosby, Duke Ellington, Louis  Armstrong, Ray Charles, The Doors, Led Zeppelin and U2.

The official opening of the Hampton Bridge, spanning the Hampton River carrying  passengers from Route 1A to Hampton Beach was May 14, 1902. The ceremony was  attended by then-governor Chester B. Jordan. The bridge measured 4,740 feet in  length and 30 feet in width and was supported by 3,865 wooden piles. For a  while Hampton Bridge was the longest bridge in the United States. As the  trolley car era came to an end, automobiles took over and the wooden bridge was  no longer effective. Today the bridge is constructed of steel and concrete.

The Hampton Beach Village District was established on June 26, 1907 and  electricity and waterworks were installed at Hampton Beach first to ensure the  comfort of visitors. More important was the creation of the town's first fire  department to ensure the protection and safety of property at Hampton Beach.  The 1923 fire station is still in service today, located on Ashworth Avenue.

With a nod to its puritanical roots, the town would seasonally employ “bathing censors,” who would keep an eye on the swimsuits of the 1920s era to make sure they were  not too risqué.

The Hampton Beach Playground established in 1920 continues to thrive and has  sparked the annual Children’s Festival, which will run this year from August 13-17. During the summer  months, free nightly concerts at the Sea Shell Stage and fantastic fireworks  abound. A Miss Hampton Beach has also been crowned every year since 1946.

Every summer in the middle of June 300 tons of imported sand is brought to  Hampton Beach for the Annual Master Sand Sculpting competition where tens of  thousands of spectators come to watch sand sculptors create their masterpieces  for up to $15,000 in prizes.

In 2010, Pollstar named the casino ballroom one of the top 100 worldwide venues  and continues to host wide ranging acts from comedienne Chelsea Handler, rocker  Marilyn Manson and indie band favorite Panic! At the Disco.

Christy Smith-Sloman is a staff writer for New England Condominium and other  publications.