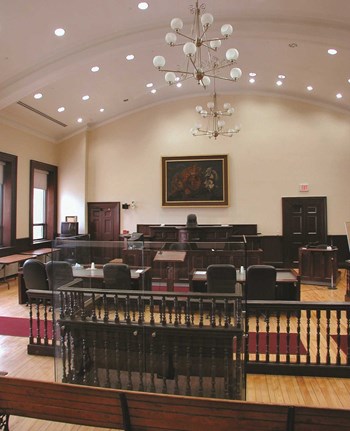 Lawsuits are usually not an association’s go-to method for dispute resolution. Expensive and time-consuming, they can  quickly turn into a financial burden and may create strained relations in the  community. Unfortunately, in some cases there’s no other way out. Last year a couple filed a suit against a neighbor, the  association, individual board members, and property managers, who all neglected  to respond to the couple’s complaint of odors infiltrating their unit, the result of 20 cats inhabiting  the neighbor’s unit below.

This may have been an extreme case, but most associations will be involved in a  lawsuit at some point, though the length, and certainly, the price tag may  vary. “The only thing that’s under your control, as far as costs are concerned, are the actions you take.  You have no control over the actions the other side takes — and sometimes the other side will take all kinds of crazy actions, simply  because they have the money to do so; they want to wear down the other side,” says Foster Cooperstein, an attorney at the Law Office of Foster Cooperstein in  Newton, Massachusetts. “Bottom line is if you end up in a courtroom, it’s usually not cheap.” Regardless of the cost or type of complaint, there are a few basic points about  lawsuits that all associations should be aware of, he says.

Unless you live in a utopian condo association, lawsuits are bound to happen.  The most common ones include noise complaints between neighbors, construction  defects in units and attempts to collect delinquent payments from residents.  But how does a lawsuit begin? Boards should know what to do if they’re the target of litigation.

“The first thing the defendant should do is consult a lawyer. The deadlines,  procedures, and strategy are very difficult to navigate without one,” says Adam Cohen, an attorney at the law firm of Pullman & Comley in Bridgeport, Connecticut. “In most jurisdictions, the defendant’s first official action is to file an ‘appearance’ form with the court and the plaintiff, which acknowledges the complaint and  provides contact information for himself or his lawyer to be used going  forward.”

In the case of maintenance fees, boards have to be strategic in going on the  offensive. “The first thing that would happen is, obviously, over the time period before you  bring suit you would’ve been sending a notice to the unit owner that they haven’t been paying their condo fee,” says Cooperstein. “Then what happens, is there’s a statute called the Super Lien statute, it gives the condominium priority  over even the first mortgage for up to six months’ condo fees and expenses. Under that statute, when a condo unit owner falls two  months behind, you give notice that you’re going to bring action,” he says.

Surprisingly, most cases are settled before the completion of a trial. That can  make the experience cheap and relatively painless, but even a settlement can  drag on, and come at the final hour of grueling litigation. Anyone involved  should really be looking for a respectful way out as soon as they can.

Don’t Go At It Alone

That said, legal experts cannot recount how many times residents, property  managers or even entire boards have tried to immediately resolve the dispute  themselves, ultimately creating more legal challenges. A trap that associations  find themselves in is selective enforcement, which for instance, can lead to  what’s called a derivative suit. “If there are condominium documents providing that there are no pets allowed—a unit owner has a pet, and the board hasn’t taken any action. Another unit owner can request that the condominium take  action, and if they don't take action to bring a lawsuit to enforce the rule, a  unit owner can bring what is called a derivative suit. Since the board has  failed to act, the unit owner is acting in place of the board. It’s no different than any other lawsuit. If they followed the rules, the unit  owner can bring suit in the name of the condominium,” says Cooperstein.

Any lawsuit is public record, so parties involved in a lawsuit don’t have to worry about invasion of privacy, but boards especially should be  careful about how they discuss lawsuits. “The board members, officers, and manager all need to be very careful about what  they say or write to anyone about the case or the events which gave rise to it,  because they can all be used as evidence against the association. Making sure  the association’s own lawyer has all of the information he or she needs to understand the facts  is key, as is routine contact, to make sure the lawyer is being proactive to  protect the association’s interests,” says Cohen.

Although lawsuits can take a toll on pocketbooks, associations or boards may be  covered by their general liability insurance, but it depends on several  factors. “Insurance will almost never cover the expense of being the plaintiff in a  lawsuit,” says Cohen. “Routine cases like those to collect unpaid common charges are usually the least  expensive, while cases motivated by animosity or principle—like rule violations involving people’s children or pets, fights between current and former board members, and so on—are usually the most expensive. If a lawsuit will require expert witnesses, such  as doctors to testify about injuries or computer techs to examine electronic  records, the costs will be significant. Jury trials are usually more expensive  than cases decided by a judge, and appeals will add even more,” he says. Those more arduous lawsuits tend be covered by a separate policy  called directors and officers insurance (D&O).

Lawsuits are no cheap matter, that’s a given. However, predicting the cost of a lawsuit is difficult because the  process is so slow and taxing—and it’s designed that way so that more petty issues don’t clog the courts and judicial system. “The way the courts are today, very often you will find that you go to court, and  instead of being there for a short period of time and being heard,” says Cooperstein, “you might wait for an hour or more to be heard for ten minutes.” The court system is overburdened, he says, rife with budgeting and staffing  problems, and more.

Lawsuits that spiral into expensive and damaging affairs don’t happen overnight. “Connecticut law allows associations to require all disputes between unit owners,  or between the board and unit owners, to be referred to mediation or  arbitration, although most do not do so. Once a lawsuit is underway, the courts  have certain programs designed to get the parties communicating about ideas for  settlement,” says Cohen.

Parties can meet on their own, even without the presence of an attorney, but  recently, many residents and associations seek the guidance of mediation  experts, who serve as a kind of neutral buffer and offer constructive methods  to reaching a compromise.

But if that doesn’t work, other methods of resolution are available that are faster and often  cheaper than drawn out litigation. Mediation is non-binding, which might come  up with an agreeable settlement before going to court, but it only takes one  unreasonable party to take all the power away from mediation. Arbitration, on  the other hand, is legally binding, and arbitrators usually have quite a bit of  experience in the field they work in, as opposed to judges who are familiar  with law in general.

The Downside of Constant Litigation

The occasional lawsuit will not cripple an association, but a long history of  litigation may hurt a community’s standing with prospective buyers and lenders. “Litigious associations tend to experience three significant impacts. First, the  financial burden of legal fees and insurance premiums drives up common charges  and diverts them from more practical uses, such as maintenance and capital  improvements. Second, the residents become angry, suspicious, and resentful,  and tend to organize into antagonistic groups, which make the community an  unpleasant place to live,” says Cohen.

But insurance rates and lenders are not the only downsides to a suit-heavy  association. “Board members and managers tend to resign or get forced out very frequently,  which leads to volatility, deadlock, and ineffectiveness. Also, although it’s difficult to measure, it’s likely that an association involved in an unusually protracted case or large  number of lawsuits would be less attractive to potential buyers, which would  diminish home values,” says Cohen.

Lawsuits can be an expensive and time-consuming experience for residents and  associations alike. Though pursuing mediation prior to filing can produce  cheaper and quicker results, it might not work for all complaints. Should you  find yourself involved in a lawsuit, seek counsel of the association’s attorney who can help you determine the best legal route to pursue.

Maggie Puniewska is a freelance writer and a frequent contributor to New England  Condominium. Editorial Assistant Tom Lisi contributed to this article.