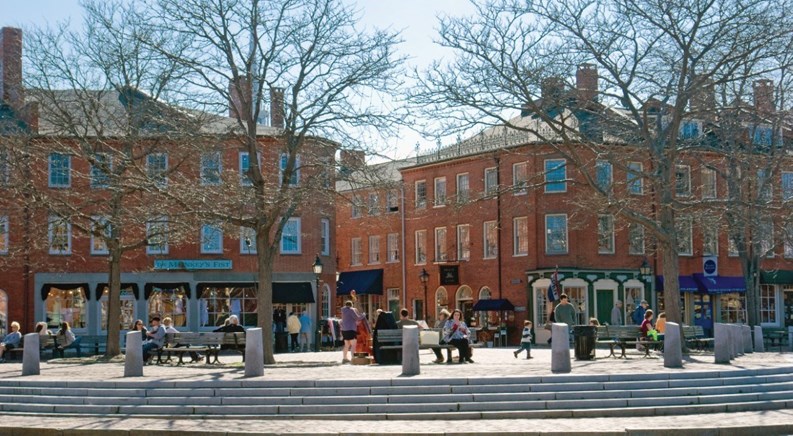 When the city of Newburyport incorporated in 1764, it encompassed less than 10 square miles and had a population of about 3,000 people. Today, the city still covers less than ten square miles and has a population of fewer than 18,000 residents. From its initial European settlement in 1635 to the present day, much has changed in this small New England port – and much has remained the same. Located on the coast 35 miles north of Boston, modern Newburyporthas boatyards, beaches, wildlife preserves, historic buildings and city festivals to draw people to this reinvented port city, where recreation is the new commercial trade.

Situated at the mouth of the Merrimack River and the shores of the Atlantic Ocean, the sea has driven the economic growth of Newbury-port for more than 350 years. In its earliest years, the port was the economic powerhouse of the town. Whaling, fishing, shipbuilding and trans-Atlantic trade allowed the town, and the port inparticular, to thrive. The commercial success of the port was strong enough to allow the port to separate from the town of Newbury and become a separate incorporated entity in 1764.

Walk down virtually any street and you will see vestiges of the town’s successful shipping past. High Street is lined with the gracious homes of sea captains and shipping barons. According to the website of the Society for High Street, whose mission is to “preserve the legacy of High Street for future generations,” fewer than 10 of the 230 buildings on High Street are less than 50 years old. Market Square, also on the National Register of Historic Places, is described by the National Park Service as “one of the last seaport districts remaining from the golden days of New England shipping.” The U.S. Customhouse, the harbor lighthouses, elegant homes and brick shops are all preserved reminders of Newburyport’s prosperous maritime history. When the shipping trade weakened in the 19th century, industry helped keep the city economically viable. Many of the original mills and tanneries can still be seen today. On Water Street, “The Tannery” is a restored complex of original tannery buildings that have been converted to 75,000 square feet of shops, restaurantsand galleries.

The Not So Good Times

Like many small towns in Massachusetts and throughout the country, the decline of industry and the growth of suburbs and strip malls threatened the survival of Newburyport in the 1950s and 1960s. By 1970, economic decline left much of the downtown slated for demolition. Ann Ormond, president of the Greater Newburyport Chamber of Commerce, noted it took many dedicated people, including the then-mayor Byron Matthews, to stop the wrecking balls and point the city toward a new path – the path of preservation and restorationof the downtown and waterfront.

Thanks to the preservation effort of the 1970s, Newburyport, once active with whalers and shipbuilders, now teems with tourists and residents, birders and shoppers. Inn Street, one of the city’s oldest, was converted to a brick-paved street lined with fine shops. The shipyards, which once produced and launched clipper ships (including the first U. S. Coast Guard vessel, the Revenue Cutter Massachusetts), are now busy boatyards that maintain, store and moor recreational boats. Market Square, which once hosted its own rebellious tea party, has become the bustling retail center of a restored and re-imagined downtown.