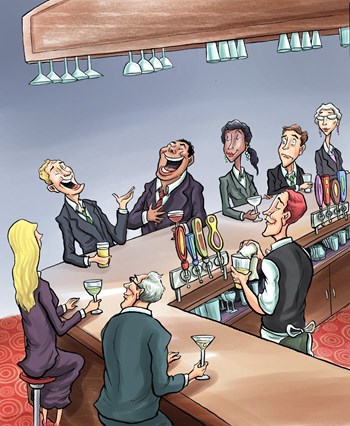 A recent Massachusetts condo dispute over the proper disposal of pet waste is  the latest high-profile example of frivolous condo litigation—a long-running and costly problem for many HOAs. The incident eventually  escalated to the point of obscene gestures and nasty signs and memos, inciting  one resident to place bags of excrement, labeled with the name of the condo  board president, in common areas. The case, finally reaching a Massachusetts  appellate court, received wide analysis among constitutional scholars—and wide grins among news-reading Bay Staters, who, like many outside observers,  chuckle at such bizarre and childish behavior. Yet similar incidents are no  laughing matter for condo boards, many of whom face lengthy court battles—and unnecessary drains on association reserves—in the wake of legal challenges.

“There are certain claims out there which I as a practitioner think are  frivolous, and shouldn’t be presented in any forum,” says attorney Clive Martin at the Boston-based legal firm Robinson & Cole, LLP. “The frivolous claims usually boil down to one person, an unhappy unit owner  wanting to vent his or her emotions whether they are well-founded or not.” Yet, as many board members can well attest, one person’s frivolous claim is another person’s serious and heartfelt complaint, and such inequities may often end up in  court.

“Representing associations, I see many claims that I don’t think are well-founded and should be dismissed,” Martin notes. “But many times, the people who are thus aggrieved —so aggrieved as to make a formal complaint, which then has to either be remedied  or resolved through mediation or small claims or regular session in superior  court—are often hell-bent to have their day in court.” In fact, as many dispassionate observers have noted, seemingly-frivolous  complainants are often the ones most determined to press matters legally. “And it’s extremely aggravating and inefficient and costly and wearing on the energies  of the association,” says Martin, “but I think that’s part of the cost of doing business in an association.”

“It’s the veteran who wants to fly a flag. Somebody’s coming home from the service, and the board tells the unit owner that he can’t put a sign,” notes Charles Perkins, Jr., a senior partner at the Westford,  Massachusetts-based law firm of Perkins & Anctil, P.C. Perkins—who’s quick to note that he doesn’t feel his firm has ever filed a frivolous claim—says he’s frequently defended condo boards against them. Often times, such cases are  filed pro se, with the plaintiff advocating on his own behalf, leaving condo  associations no choice but to face a costly legal challenge from an opponent  who incurs little or no expense.

“Sometimes that’s the best leverage that the plaintiff has,” explains Martin. “They [threaten a suit, saying] ‘I’m gonna cost you. It doesn’t cost me. I’m gonna represent myself. I’m gonna go to court, file all the papers, and be a big burden on you until I get  what I want.’” Many such disputes begin as very small matters, the victim of what Perkins  calls “bad facts.” And when such bad facts arise, condo associations often use less-than-wise  judgment in dealing with them.

“If you’ve got a situation where you may feel empowered to act one way, you’d better really take some time to analyze all the facts involved. Because  somewhere down the road, you’ll have to live with those, and they may be presented in such a way as to make  you look patently unreasonable,” Perkins says. "It’s the headline test. You don’t want to find yourself being written in the paper because you’ve done something that will incite those people who think condominiums are awful  and the people who run them are terrible.”

Recent examples of HOAs failing the

A unit owner, who agreed to provide temporary care for a friend’s parrot, inadvertently violated his condo’s pet policy. The resulting violation eventually found its way into court,  prompting the HOA to place a $40,000 lien on his unit to recover court costs  and fees.

A terminally-ill woman was denied the ability to live with her seventy-pound  chocolate lab, a registered service animal, because the dog exceeded her  association’s pet size restrictions.

A unit owner’s construction of a 20-foot sukkot, considered a fire hazard by some fellow  residents, instigated a dispute which eventually led to a $500,000 lawsuit and  press allegations of anti-Semitism.

And any recent survey of headlines regarding condo litigation will reveal  similar claims, ranging from the cunningly creative to the simply bizarre. “I can think of cases where unit owners sue the board, claiming they were not  properly elected,” says Henry Goodman, principal at the Massachusetts law firm of Goodman,  Shapiro, & Lombardi, LLC. “And then they therefore claim all the work done by board was not valid.”

Money is at the Root of Many Claims

In a preponderance of frivolous legal claims, the dispute often begins over  unpaid condo HOA fees and quickly escalates from there. When board members  press for legal action against delinquent residents, all manner of quirky and  unrealistic counterclaims can occur. Goodman, an experienced condo attorney and  member of CAI’s National Board of Trustees, has seen plenty of them. “They’ll file a counterclaim because they don’t like the way the landscaping is being maintained, claiming that they suffer a  loss of value in their homes. This is something that is totally frivolous, but  they do it because they feel the best defense is a good offense.”

In many cases, the general temperament of the parties involved—not the facts of the case—is the primary factor in determining whether a small disagreement is escalated  to a frivolous legal claim. “And, as the case proceeds, the hostility grows bigger. You can never dial back  the emotion. You can only dial it up,” says Martin. “It’s sort of sad actually. And how do you handle situations like that in a civil  society?”

“I know of a case where an individual wanted to bring a lawsuit against the  board, because he didn’t like the board’s attitude when he addressed the board,” says Goodman. “There’s a freedom of speech issue here where board members have a right to have an  attitude. It might not be nice; it might not be socially acceptable. But it is  not actionable in our courts.”

Regardless of the seeming irrationality of any claim, often the only thing that  serves to stave off a condo court battle is a plaintiff’s lack of financial wherewithal to pursue the matter. (And in the case of pro se  filings, such monetary roadblocks are often unlikely.) “If that person does have the affluence to take it to court, you’ve got this frivolous piece of litigation that is just on a huge scale,” says Martin. “And the only way to get rid of those kinds of claims, is to have a judge—a man or woman wearing a black robe—say this is ridiculous, this is frivolous. But, in my experience, that doesn’t often happen.”

For attorneys like Martin, proving the frivolity of a plaintiff’s claim is a tenuous exercise at best. “Too often from my point of view, it takes quite a bit of work for a judge to get  to the point where they are willing to say, ‘Sir, you’re talking nonsense. You don’t have a claim.’”

The problem, explains Perkins, is that the term “frivolous”—a word often used flippantly in non-legal circles—is a specific and weighty legal concept. “Judges are more willing to say, ‘you win and the other side loses’ than they are to say the other side is frivolous, because that carries with it,  in some sense of the word, the potential for attorney’s fees and costs.”

“In other words,” says Martin, “if you win the lawsuit, you can then go forward and make a motion for your costs  and your attorney’s fees, because anything pleaded against you was ‘wholly insubstantial, frivolous, and not advanced in good faith.’ That’s the text of the statute. Sometimes judges are reluctant to say that. I’ve been in situations where judges say this ‘approaches frivolousness’ or this ‘approaches lack of good faith.’ To actually get the judge to enunciate the word frivolous is difficult. It’s hard to make them commit to that.”

“I think to a large extent judges would be somewhat reticent for the simple  reason that you do not want to limit access to the courts,” explains Goodman. “So unless a case is truly and obviously frivolous, in the real sense of the  term, then I think the court would be reluctant.”

Ultimately, if disputes do reach the actual litigation stage, it will be the  court’s responsibility to sort through the subtleties, hopefully discerning the true  motivations of all parties involved. “I don’t think that any rational person would want to spend money—even an association’s money that’s not their own—on an attorney to bring a lawsuit against somebody that is frivolous unless the  purpose behind it was some sort of harassment or intimidation,” says Goodman. “Unless you’re someone who’s unbalanced, you don’t want to just sue people.”