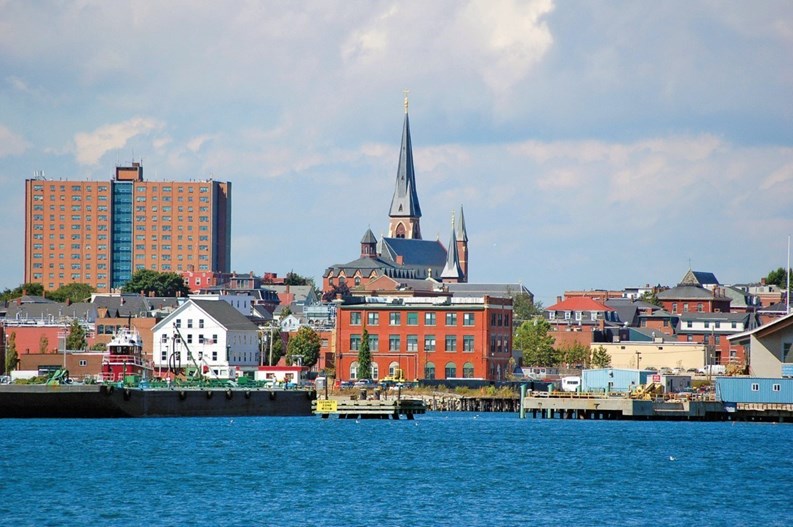 Four million people visit Portland, Maine each year. But don’t picture lobster bibs and sunburned summer tourists. The largest city in Maine  is not known for its fish shacks, candy stores or beaches. The center of both  commerce and culture in Maine, Portland is a thriving small cosmopolitan city.  With a world-class symphony and art museum, nationally-ranked restaurants, more than 40 languages  spoken in the public schools, and industries from insurance to semi-conductors,  Portland is an old city with a new beat.

The population of the city of Portland has remained astonishingly stable over  the past 100 years. Census data lists 60,000 people living in Portland in 1910.  Today, there are approximately 64,000 living within the city limits. However,  nearly a quarter of Maine’s total population – 270,000 people –live and work in the greater Portland area.

One can still find notoriously crusty Mainers here – complete with thick accents, weathered faces and the belief that those who haven’t been in Maine for generations are “from away.” But one can also find new communities of residents from Africa, Eastern Europe and Southeast Asia. There are entrepreneursenticed by the burgeoning technology and service sectors. And there are many  transplants who are more than willing to be considered “from away” simply to partake in Portland’s quality of life. Regularly appearing on lists of most livable cities and best  cities for doing business, Portland’s charms are no longer a secret.

Settled by the British in 1632 as a fishing and trading outpost, Portland’s identity has long been anchored by its “Old Port.” Portland became a major commercial port and shipping center in the middle of the eighteenth century. Weathering wars, storms, trade boycotts and fires, the port has been an integral part of Portland ever since. While no longer central to the economy, the citystill claims to have the largest tonnage seaport and the second largest fishing  port in New England.

Although Portland’s waterfront and port are vital to the landscape and character of the city, the  modern economy of Portland is largely fueled by service industries, explains  Nora Kreisler of the Chamber of Commerce – most prominently tourism, insurance, financial services and medical services.