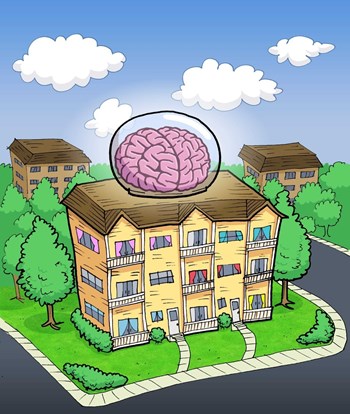 If phones can be “smart,” why not buildings? With the ever-expanding array of consumer technology  available today, it should come as no surprise that residential buildings are  incorporating more and more cutting-edge technology into their communications,  security, and operations systems than ever before, and unifying building  operating systems so they can be monitored and run from a central location by a  building staff member, or by residents themselves with smartphones and iPads.  Many of these innovative systems are being installed from square one in new  construction, but also in the form of upgrades and retrofits in older  buildings. Let’s take a look at the state of the industry.

When considering smart buildings, the key word is integration. But what does  that mean exactly?

“Integration in general is a very broad term, which can be used to describe  systems that are (a) just minimally aware of each other—and even systems that are aware of each other only as a result of manual effort,  or are (b) fully aware and communicating bi-directionally and in a way that  enhances each system’s ability to behave better and smarter. In any building at all, system  integration makes the mechanical, electrical and energy operations of a  building flow more smoothly and efficiently,” says Jerry Kestenbaum, the president of BuildingLink, a New York-based company  that puts condo buildings online and gives association residents from Boston to  San Francisco access to all kinds of information.

Generally speaking, commercial buildings are more likely to be state-of-the-art  with respect to systems integration, while residential buildings tend to be  behind the curve. This is changing, however, as more and more boards are  finding wisdom in investing in the new technology. At first blush, it would  seem that the needs of both kinds of buildings are the same, but residential  buildings have different needs.

“The range of services provided to its occupants tends to be broader,” Kestenbaum says, “and its occupants make use of its services 24/7. Therefore, the more integrated  a system is the better it will enable staff to accomplish its mission.”

One example: security. “The security needs of a residential building are much more diverse,” he explains, “in that they include key holding, security monitoring of common areas such as  garage and laundry areas, access control monitoring of a range of different  types of people with different access control needs even when apartments are  unattended (babysitters, dog walkers, contractors doing renovations, food  delivery, family members) as well as areas with special access control rules”—for example, no minors in the fitness room.

Integration and interaction are what drive intelligent buildings. But what does that mean, and how does it work?

“Building automation systems and building energy management systems”—BAS and BEMS, respectively—“are designed to provide centralized oversight and remote control over heating,  ventilation and air conditioning (HVAC) systems, lighting and other building  systems,” King explains. “In simple terms, a BAS is a programmed, computerized network of electronic  devices that are employed for control and monitoring of systems. It primarily  aims at optimizing the performance, start-up and maintenance of systems and  greatly reduces the interaction of mechanical subsystems in a building. BEMS  basically performs the same functions as a BAS but varies more in capability  and functionality.”

These systems carry out a host of functions, King says, including optimization  of stop-and-start systems, maintenance scheduling, alarm generation, and  constant monitoring of the whole integrated system.

“BAS and BEMS vary in capability and functionality, but typically consist of  sensors, controllers, actuators and software,” he says. “Depending on whether a human-in-loop factor is involved, decisions are taken  manually or by utilizing embedded intelligence such as decision-making  algorithms.”

Technology, as the futurist Ray Kurzweil points out in his books, is progressing  exponentially. Intelligent buildings are no exception. What began with modest  advances is now capable of astonishing feats—now covering everything from HVAC to access control and elevators, and even  business systems.

One of the most popular aspects of smart systems in New England homes, says  Richard Shook, owner of Automated Homes of New England in Winchester,  Massachusetts, still centers on energy use. “The reason we’ve seen people start to use these systems more is that they can see an 11 to 17  percent reduction in their utility bills,” he says. With today’s technology, “people can use their iPhone or Android to call their home to start warming up  and cooling down before they arrive home.”

In a condominium setting, he says, each unit can be controlled separately to  accommodate the lifestyle of the residents. The systems have also gained favor,  he says, with property managers, who can warm up vacant apartments from their  offices just before prospective renters arrive for a showing.

“Traditionally, building systems had been characterized by highly proprietary  offerings with limited ability to inter-operate,” King notes. “As an example, in the 1950s, control over a commercial building’s lighting systems and heating and air conditioning would have been separate  functions, probably maintained by separate personnel. With the advent of  computer systems being integrated into buildings in the late 1980s and early  1990s, such building systems could be centrally controlled”—that is, integrated.

Once that was achieved, the technology flourished. “With the advent of open networking and the Internet, now systems can be  controlled remotely, and building operations across a whole building portfolio  can be centralized in one regional control center,” King says.

Of course, just because something is possible doesn’t mean everyone is doing it; contrary to popular belief, not everyone tweets or  is on Facebook. “Some buildings have adopted only the barest of minimums of technology  innovation, often when older systems have failed and have been replaced with  new equipment, like current smarter boiler controls, elevator controls, or to  meet bare-bones security needs—like having one or more video cameras displaying or recording a service alleyway  or a laundry room area,” Kestenbaum says.

“Others have begun to adopt somewhat more advanced technology with better access  control, smarter HVAC systems using better predictive algorithms for heating  and cooling, and adopting comprehensive communications-event-data tracking  systems like BuildingLink that use the internet for advanced communications and  security event logging and notification.”

Of particular interest to residential buildings, with their multiple entries  (front door, laundry, common rooms, roof, etc), is what Kestenbaum calls “key security—meeting the challenge of keeping emergency copies of owners’ (unit) keys in a totally secure environment (so as to prevent employee theft or  other unauthorized access) while at the same time providing quick emergency  access 24/7.” This is a relatively new option, he explains. “Twenty years ago, there was no system at all for this, and now there are two:  Keytrack, and our solution, KeyLink. These are highly sophisticated lockbox  biometrically-operated systems, uniquely used by residential high-rise  buildings, auto-dealerships, and the U.S. military in Iraq.”

Not every system available is suited to every building, however, and Shook has  reservations about some uses of the technology. “Wireless technology still has a lot of problems,” he cautions, referencing a lighting control system in one community that was on  the same frequency as a taxi company. A cab sitting in front of the building  could turn indoor lights on and off, he says. Shook also prefers traditional  hard-wired installations for safety systems like smoke or carbon monoxide  detectors, although he has “no problem” with the use of wireless motion detector systems. Each community or building,  he says, needs to evaluate the options before adopting the latest technology. “People are slow to adopt some of these new ideas,” he says. “The best time to make these decisions is when a building is being built…. And we’re seeing that more of the mid-range and high-range condos that are going up  include these options.”

The systems do cost money, but they are not prohibitively expensive—especially when considering the energy savings. For example, the BuildingLink integrated operations platform “can be installed and be up and running in a week if needed,” Kestenbaum says, “and typically would cost a 150-unit building around $4K per year.” Associations, then, have to weigh the costs against potential savings.

“In an era of volatile energy prices and increasing concern over climate change,  the need for the innovative application of technology has become highly acute,” says King. “Buildings with integrated intelligent building technologies can save thousands  and even millions of dollars in energy by delivering heating, cooling and  lighting more efficiency. Intelligent buildings are increasingly using solar  walls to capture energy from the sun, ventilation systems to recapture and  reuse heat, insulation strategies that enable better climate control,  high-efficiency lighting systems that enhance illumination with less  electricity and automatic systems that control building services based on  activity.”

Kestenbaum agrees. “The LEED pioneers indicate that it definitely does save money, and depending on  the areas targeted, the payoff can be longer or sooner. As costs come down, the  payback period will become shorter and a greater number of types of ‘smart’ integration undertakings will make sense.”

Greg Olear is a freelance writer and a frequent contributor to New England  Condominium. Associate Editor Pat Gale also contributed to this article.