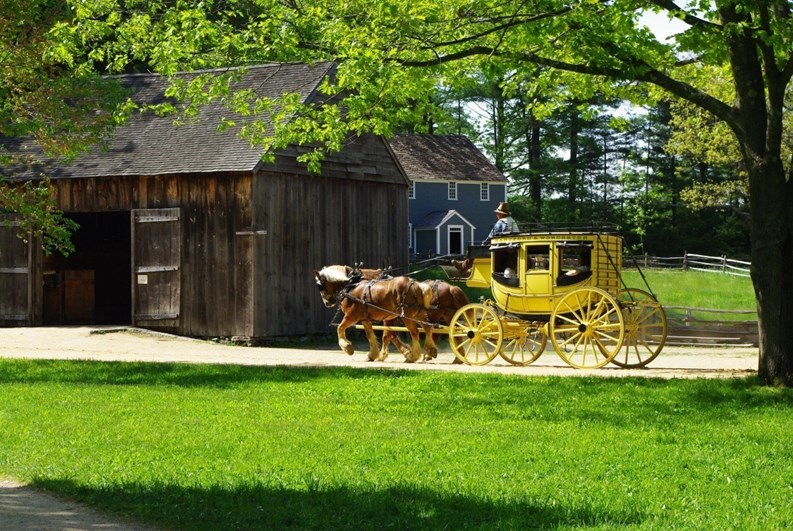 All roads lead to Sturbridge, Massachusetts—or so it seems.

A thriving community with colonial roots, Sturbridge stands at the crossroads of  New England. U.S. Route 20 runs through the center of town, and the junction of  Interstate 90 (the Massachusetts Turnpike) and Interstate 84, which runs  through Pennsylvania, New York, Connecticut and Massachusetts) is located here.

Its prime location is part of its appeal to newcomers and long-time residents  alike.

“The highway system provides direct access to three major cities: Springfield,  Worcester and Hartford (in 30 to 40 minutes),” said Jean Sullivan, a broker with Sullivan and Wallace Real Estate and chairman  of the board of directors of the Chamber of Commerce of Central Mass South.

“It’s a direct link from Sturbridge to Boston and Vermont, New Hampshire and Maine,” said Dick Vaughan, a local radio host and chairman of the Sturbridge Tourist  Association.

On the Comeback Trail

The town is currently on a comeback after the economic downturn, he said, thanks  to new businesses and an influx of new families.

“For a time it had lost its luster, but officials recognize the importance of  accepting change to encourage growth and are actively trying to attract new  businesses,” he said.

Sturbridge was settled in 1729 by settlers from Medfield, England and officially  incorporated in 1738. Its name comes from Stourbridge, England. Located in Worcester County, Sturbridge covers 39 square miles. Its northwest  portion, Fiskdale, has its own post office and zip code. The population is around 9,000 residents, according to the 2007 U.S. Census.  Over 95 percent is white, with the remainder of residents from  African-American, Native American, Asian and Latino heritages.

“It’s a nice blend of singles, families and empty-nesters,” said Sullivan. The town is proud of its schools, most notably the new Tantasqua  Regional High School, located in Sturbridge.

“It looks like an inn and conference center and serves about 1,200 students,  grades 7-12, from Sturbridge, Brookfield, Brimfield, Holland and Wales,” said Sullivan.

Stepping Back in Time

Old Sturbridge Village is the leading attraction for residents and visitors  alike.

Founded in 1946 by the Wells family, local industrialists who had amassed a  large collection of Early American tools, utensils, furnishings and clocks,  Sturbridge Village today is the largest outdoor living history museum in the  Northeast.

A visit here is like a journey back in time to a rural New England village in  the 1830s. It is comprised of over 40 original buildings, each carefully  researched, restored and brought to the museum from sites across New England.

Costumed interpreters carry out the daily activities of an early 19th century  village. Visitors roaming its 200 acres can talk with a farmer plowing fields,  listen to the blacksmith’s rhythmic hammering or smell bread baking in a fireplace oven.

Sturbridge residents see it as a treasure in their midst, said Sullivan.

“People here are proud of Old Sturbridge Village,” she said. “Our kids love having it in their own backyards. They vie for summer jobs here  and love learning history by participating in it.”

“It’s a unique place unto itself,” said Vaughan, praising the new director Jim Donahue, who is bringing the  village back to the days when it hosted 500,000 visitors a year.

Sturbridge is also part of the Last Green Valley project, a 35-town consortium  that stretches along a corridor in Central Massachusetts and Connecticut and  preserves green areas, farmlands and recreation spots.

“Thousands of acres are involved,” said Sullivan. “They hold an event each October called Walktober, with over 100 different  walking events. It’s a perfect time to be here.”

“A lot of people move here for easy access to the highways and to be close to  their kids who have gone to school in New England and settled here and it’s a lot more affordable than eastern Massachusetts,” said Sullivan.

Several condominium developments are located in Sturbridge, offering garden,  townhouse and detached home construction. Recently, 11 were listed with the  average price $214,664, according to Sullivan.

Sturbridge Hills, another condominium development, has units selling in the low  $200,000s.

“They have an attached garage and full basement—and you’re only two minutes to the Mass Pike. It’s a great deal,” said Sullivan.

A transplant from eastern Massachusetts, Sullivan wouldn’t live anywhere else.

“It is one of the best places to live in New England,” she said. “Sturbridge is a community that takes pride in neighbors helping neighbors.  Everyone is involved and participates.”

Understanding the Scope of Management Responsibilities