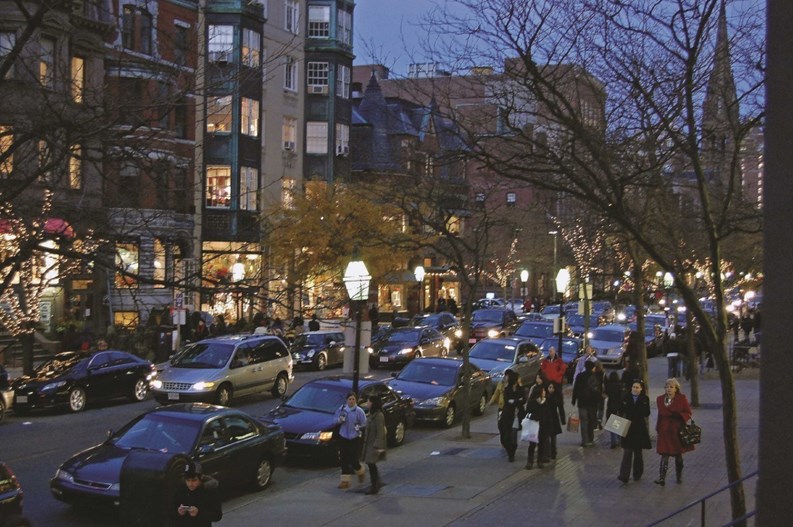 Perusing the trendy shops and restaurants along Newbury Street, or taking in the famed architecture along the Charles River, it is hard to imagine that Back Bay, arguably Boston's most prestigious and affluent neighborhood, was built on a swamp. Clearly, the neighborhood has come a long way.

Development of Back Bay began in 1814, when the Boston and Mill Corporation was chartered to construct a dam that would also serve as a toll road between Watertown and Boston. The dam created a swamp in the tidewater flats of the Charles River, which during the time was deemed a "health hazard."

In 1856, the development plans for the Back Bay neighborhood were proposed by architect Arthur Gilman with Gridley James Fox Bryant. The plans were approved and a year later, the massive project of filling in the back bay of Boston Harbor (for which the neighborhood was named) began. According to area historian and tour guide for Boston By Foot, Lee Fernandez, the project was the world's largest private landfill at the time and spanned approximately 400 acres. The filling in of present day Back Bay was completed in 1882.

During the mid-to-late 1800s, Boston was the seat of a very prominent industrial empire. According to Fernandez, around 1850, Boston was the largest cotton port in the world and home to a booming textile industry, led by Ralph Cabot Lowell. Lowell went to England to study the textile factories and took what he learned back to his factories in Boston. In addition, Boston had strong railroad, shoemaking, and finance industries. With so much industry, there was plenty of wealth in Boston, and Back Bay (and neighboring Beacon Hill) soon became home to Boston's monied upper class.

Gilman's plan for the neighborhood was greatly inspired by the renovations of Paris in the 19th century. The neighborhood is laid out in a strict street grid, focused on order. Five avenues run east-to-west along the length of the Back Bay: Beacon Street (closest to the Charles River,) Marlborough Street, Commonwealth Avenue, Newbury Street, and BoylstonStreet. All of these main avenues are one-way, with the exception of Commonwealth Avenue, which runs both ways from the Public Garden into Kenmore Square.

Commonwealth Avenue bears a strong resemblance to the wide boulevards of Paris and is populated with many historic (and expensive) townhouses. When it was completed, according to Fernandez, Lewis Mumford, a writer for The New Yorker and a historian respected for his analyses of cities and architecture, called Commonwealth Avenue, "The finest urban plan of the 19th century."

Neighboring Newbury and BoylstonStreets are commercial thoroughfares that host many high-end shops, boutiques, salons, cafes, and restaurants. Boylston Street also forms the northern boundary of Copley Square, home to some of Boston's most notable buildings and architecture. The avenues of the Back Bay are intersected by one-way cross streets that run north to south, and are named alphabetically starting at the Public Garden: Arlington, Berkeley, Clarendon, Dartmouth, Exeter, Fairfield, Gloucester, and Hereford.

The Boston Public Garden is a beautiful 24-acre park that was established in 1837. It was the first public botanical garden in the country, and is part of the Emerald Necklace, a long string of parks designed by Frederick Law Olmsted, who also designed New York City's Central and Prospect Parks. The pond in the Public Garden is home to the pedal-powered swan boats, a famous and iconic Boston tourist attraction. The Public Garden cultivates more than just stunning flowers and plants: the closer you get to the garden, the more expensive the real estate.

Copley Square may be square, but it boasts some of Boston's most notable architecture. Trinity Church was completed in 1877 by architect Henry Hobson Richardson and features a clay roof, heavy arches, and an immense tower. It was built in the style now known as Richardsonian Romanesque, one of the first widely influential styles of architecture to come from America.

The Boston Public Library was completed in 1895 and was the first publicly supported municipal library in the country, and the first to allow the general public to borrow materials. The library and the Trinity Church help to underscore the history that accompanies much of the neighborhood's architecture, which in Copley Square provides a sharp contrast to more modern buildings like the John Hancock Tower. The 60-story tower was completed in 1976, and is the tallest building in Boston, holding a predominant place in the city skyline.

The residential areas of the Back Bay, specifically Beacon Street, MarlboroughStreet, and Commonwealth Avenue, emphasize architectural order. The area's development included strict regulations on uniform architecture, which consisted mostly of three- and four-story residential brownstones -- although Commonwealth Avenue hosts a lot of townhouses. As a result of the design regulations, the brownstones have an integrated uniformity, even though they were designed and built by different architects. This architectural richness was responsible in part for Back Bay's inclusion on the National Register of Historic Places.

Regardless of its condo divisions, the residential area of the Back Bay is still an example of the largest intact Victorian neighborhood in the country, which since its formation has been a very high-ticket neighborhood, attracting those few who can afford to live there. According to Meg Mainzer-Cohen, president of the Back Bay Association, in spite of the stumbling housing market elsewhere, the real estate market in the Back Bay remains very strong. During the 1970sand '80s, the neighborhood was more affordable, but its growing popularity continually raises the price tag.

Much of that popularity is due to the neighborhood's sheer beauty, but the appeal goes deeper than mere aesthetics. With its parks and landmarks, views of the Charles River, and many meticulously preserved historic buildings, the Back Bay is a beautiful neighborhood balanced with functionality. It is close to public transportation (the "T" transit system) and is well located in the center of Boston. Situated within walking distance to parks, hospitals, businesses and premier shopping, the neighborhood and location provide a very high level of convenience to residents.

It is this balance of beauty and convenience that has made Back Bay such a sought-after neighborhood. It is also this balance that, in recent years, has drawn many empty nesters with the discretionary income needed to purchase a condo in such an expensive and competitive market. The Back Bay allows for what Mainzer-Cohen refers to as a "24-hour lifestyle," in which residents can live and work in the same area, without having to travel for much, if anything at all.

With so many features to draw residents and tourists alike, it is no surprise that the area is also home to several luxury hotels, including the Colonnade Hotel, Westin Copley Place, Fairmont Copley Plaza, and the Marriott Copley. The newest addition to the luxury condominum scene in the Back Bay is the Mandarin Oriental, a six-star hotel that will be located next to the Prudential Center and will feature retail space, 168 hotel rooms, and luxury condo units.

According to Tyler Lyman of Strategic Retail Advisors in Framingham, the residential market is so strong in the Back Bay that the condo units in the Mandarin were never even advertised. They sold out completely the same day the project was announced—ranging in price from $2.5 million all the way up to $15 million for the penthouse.

Granted, the super-luxury Mandarin development is not the standard by which to gauge condo prices in the Back Bay. It is located in a more modern area, different from the residential brownstone streets, but Lyman does use the Mandarin to point out the viability of the Back Bay neighborhood and location. In general, and depending on the unit in question, the average price of a Back Bay condo is about $700 per square foot, according to Kriva, but prices can range anywhere from $500 or $600 to $2,000 per square foot.

With so much to offer residents, it is not difficult to see how the real estate market in the Back Bay is able to stay strong, despite less-than-robust market conditions elsewhere. The neighborhood seems to have a sort of autonomy, insulated by its location, beauty, and convenience, as well as by its wealth and economy. Strict city building codes have allowed the neighborhood to keep much of its history and original architectural integrity—but do luxury condo high-rises like the Mandarin pose a threat to the residential brownstone streets, where demand for condos still greatly exceeds supply? Time will tell, but for the most part in the Back Bay, history has prevailed.