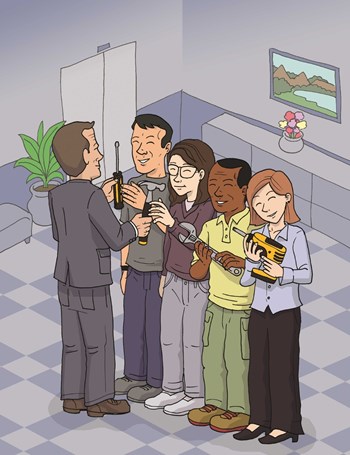 The past several years have been a challenge for community associations trying to keep properties looking sharp and running smoothly while battling the forces of a shaky economy. Foreclosures, hurricanes and the relentless effects of time on physical plants haven’t made the lives of board members and managers easy.

Is there relief in sight? Are things finally getting back on an even keel? And what new challenges—and opportunities—lie ahead for condominium communities in 2014?

At this time of year, New England Condominiumturns to a panel of industry experts—members of the Editorial Advisory Board—for some thoughts on how associations have weathered the past year, and what trends they anticipate seeing in the months ahead.

Keeping Up with the Times

“All the mega-trends are continuing to accelerate, and I think we’re at a tipping point,” predicts David J. Levy, president of Sterling Services in Holliston, Massachusetts. Technology and “green living” are among those major trends, he says. “Technology used to be a luxury, something that was nice to have,” Levy notes. Today, with “Millennials” and “Gen Xers” moving more solidly into the marketplace, technology is becoming a baseline, rather than a luxury, for managers and associations.

“They can’t fathom not having a website, email, texting, phone blasts,” he says of the younger home-owning generation. Community residents who do their shopping and banking online expect easy-access services from their associations and management companies, too. “Managers today are competing with people’s best experiences in other areas of their lives. I’m competing with Amazon in their minds. The standard we’re being compared against is higher and higher, and it’s 24/7.”

Some management companies, predicts Lou Gargiulo, president of Great North Management in Exeter, New Hampshire, will also find it harder to remain competitive as they deal with the impact of the Affordable Care Act. “There are going to be issues on how to contain (management) costs,” he says.”There’s going to be a great deal of pressure on management companies, some of which are small and haven’t provided health care but are now going to have to provide it. Some companies might find that a challenging issue” in the year ahead, he suggests.

Managers, says Stephen DiNocco of Affinity Realty & Property Management in Boston, are not just working to meet client expectations—they also have to manage those expectations. While some select markets, like Boston, have seen increased values in the past year, many owners are still waiting for their homes to return to pre-recession values. “I don’t think people are feeling good, and I think it’s going to get worse before it gets better. When people don’t see a rise in values, they tend to look for scapegoats—the board of directors, managing companies—everything but the fact that the economy just isn’t doing well.

“We need to manage expectations, and get people to be more realistic about what they can expect with the value of their homes,” he suggests. The Boston real estate market may be in better shape than some, but overall, people don’t feel they can sell their homes immediately if they want—or need to, he says. “People like to feel that home ownership is somewhat liquid. If they can’t change their lives when they want to, they don’t feel good about it.”

Adding to that queasiness is the number of homes that are in various stages of foreclosure. Despite an improving real estate market, there are many abandoned units throughout New England—units from which the association is not collecting monthly fees, putting pressure on remaining owners. “The period of time it takes for banks, especially large banks and Fannie Mae, to foreclose on units … is significant,” Gargiulo says. At some point, associations may sue for those fees—but that move carries its own dangers. “The problem is that you don’t know when the bank is going to step in and if you do it, and the bank steps in to foreclose, the cost of that [collection effort] is lost. It’s tricky.”

There are, he says, “a lot of units still just sitting there. It’s really less about what the market is and more about the banks coming in to write down the stuff. I suspect it will be that way for at least another two or three years.”

The foreclosure issue is one that the condo industry, through the Community Associations Institute, is trying to address. The Massachusetts Legislative Action Committee is working on three priority issues, says Stephen Marcus, a partner in the Braintree, Massachusetts, law firm of Marcus, Errico, Emmer & Brooks. Among them is legislation that would clarify the Super Lien law so that successive liens will be recognized by the courts.

Under the current law, when a bank forecloses on a unit, the association has a priority lien that allows it to collect six months of unpaid condo fees, putting the association ahead of the bank’s mortgage. “Unfortunately,” says Henry Goodman, a partner in the law firm of Goodman, Shapiro & Lombardi, LLP, with offices in Massachusetts and Rhode Island, “there are unit owners who have fallen behind more than once, and some lenders are trying to say that you are only allowed to have one (six-month lien), even though nothing in the law says that.” According to CAI, the bill attempts to “clarify the fact that a condominium association’s priority lien for common expenses is not limited to one six-month lien period, but includes all six-month lien periods established in accordance with the statute.”

The “clarification” legislation is important, Goodman says, because “there are always people who don’t like the law and try to find loopholes, who invent some kind of argument to circumvent the law.”

Also on the legal front, Goodman predicts an increase in cases related to transition from developer to association boards, as developments begun years ago finally reach completion, and in cases related to a decision by the Massachusetts Supreme Judicial Court regarding removal of ice and snow accumulations. “We see more claims from people who slip and fall on ice, and some of that is because the court changed the law, as well as more claims of breach of warranty of habitability.” Legislation is being pursued to extend the statute of limitations related to developer defects in properties, because in the sluggish market, developers have held control for such a long time before turning them over to independent association boards.

Marcus also sees “free speech” issues—which in the past were generally confined to government actions—surfacing with increasing frequency at condo associations. “Private communities have been sheltered (from charges of free speech infringement) but there’s been a chipping away, and I expect to see more of that.” Also on Marcus’ prediction docket: more cases related to smoking—of cigarettes, marijuana, and even electronic cigarettes.

In the meantime, boards and managers may feel they’re working around the clock to increase values by improving their properties — even in the face of economic challenges.

“Finally, condo associations and specifically, the unit owners within them, are realizing that when roofing or siding projects are done, the work inevitably reaches into other areas like windows and doors,” says Ralph Noblin of Noblin & Associates Consulting Engineers. “I see more boards becoming willing to talk about things like windows and doors when they’re spending millions of dollars to replace siding and roofs.

After the roller-coaster ride of the housing market in the past decade or so, buyers are more cautious, and, Noblin says, are taking a serious look at home inspections before making a purchase. And those inspections are more in-depth, going beyond the confines of the individual unit. “Everybody has started to realize that a home owner is buying into all of this; they’re part of the association,” he says. Buyers want to know about all the building components, “so that two years down the road, they don’t get whacked with a special assessment.”

In order to avoid those surprise assessments, Noblin adds, more associations are being more diligent about reserve funds, and are taking out loans for projects to spread the cost over time.

The 2014 budget talks, of course, have included planning for rising insurance costs. Bernie Gitlin, executive vice president of Risk Strategies Company, has long predicted rising rates—and he continues that prediction for 2014. “We’ve already seen some pretty significant rate increases,” he says. Losses stemming from a host of disasters made “2011 the worst year in the property market worldwide,” he says. Rates had been fairly stable for several years, but losses finally caught up to the industry, and the past few years have seen major disasters, including floods, windstorms and even earthquakes here in New England.

“Hurricane Irene went up to the middle of New Hampshire and Vermont; there are still places that haven’t been fixed,” Gitlin notes. “Then there was Hurricane Sandy that came up the coast and took at left at New York — probably the worst place in the world to hit.”

To add insult to injury, Gitlin says, “They are in the midst of re-mapping the FEMA flood zones … so places that were not in flood zones before, now are” — again increasing costs for associations. Gargiulo notes that some communities have challenged, or are considering challenging, what they consider incorrect inclusion on the maps because of the “substantial” costs. At the same time, Gitlin says, “it’s hard to fight the federal government.”

Insurance rates that held steady for several years were, Gitlin says, “just not sustainable,” and eventually had to rise. And properties that have experienced losses “have really taken it on the chin.” Some associations, he notes, have seen rates double because of previous losses.

Easy to be Green?

The final mega-trend that industry experts are eyeing now is “green living.” Read any newspaper or magazine, Levy notes, and you’ll read about “green this and green that.” In the coming year, “more associations and management companies will realize it’s not a fad.” Moves such as switching from incandescent to LED lights, installing dual-flush toilets, or switching elevator motors from DC to AC can lead to significant savings on utility bills. Associations may decide to convert from oil to natural gas. “At one condo, there was a 1.2-year payback” for that switch, he says.

“I think the green building push will continue,” Noblin agrees. “I love green, trying to preserve our natural resources.” But, he cautions, decision-makers need to take a hard look at any “green” products they’re contemplating using, weighing how long they’ll last. If an “old-fashioned” product lasts 200 years, and a new “green” one lasts 10, “which one is really more green?” he asks.

How will the experts’ predictions hold up in the year ahead? Stay tuned.

Pat Gale is the associate editor of New England Condominium.