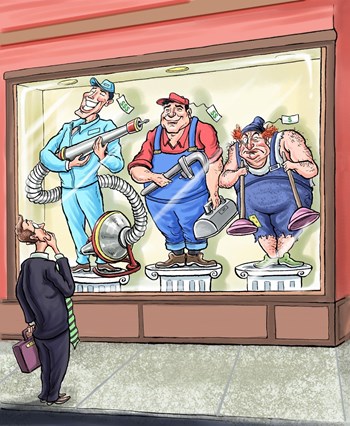 In today’s economy, the price of many of these items has gone nowhere but up (and up and  up). “The rising costs of fuel and electricity are impacting everybody, and costs to a  property-sharing common expense can and have changed substantially, leaving many with a deficit at the end of the year,” says Kerri Bonariggo, director of residential sales for Gordon’s Woods Condominiums in West Roxbury, Massachusetts.

As an example she says, “an association I work with and meet with regularly had the phone lines for the  fire alarm system and elevator emergency raised by $30 per month. If you are  not regularly monitoring every bill that is received, these small adjustments  add up to large dollar amounts quickly.”

Costs should always be on the forefront of a manager’s mind and there may come a time when the budget has to be tightened. The bottom  line to managing an association’s bottom line is to do what anybody does when hit with too much month at the end  of their money: Evaluate spending, cut costs and look for better deals.

Evaluating current expenditures is the first step in determining whether or not  any spending is out of control and if changes are needed to rein it in. “This may sound silly, but we see how [our spending] is compared to our budget…and if we’re within budget, we think we’re usually doing pretty well,” says Mark Luckman, CMCA, AMS, a senior property manager at Thayer & Associates Inc. in Cambridge, Massachusetts. “The red light comes on when we’re noticing a line item that exceeds the designated budget for that year.”

“The numbers don’t lie,” Bonariggo agrees, saying that after assessing a profit and loss statement vs.  the budgeted dollar amounts, “it’s very easy to determine whether or not changes need to be made.”

Steve Wholley, CMCA, senior vice president and portfolio manager at The Niles  Company, AMO, in Quincy, Massachusetts, says an assessment of an association’s spending will initially kick in when the firm takes over its management. “We look at their spending for a year, and see what months are costing them the  most. When we identify these months, we seek ways to lower their cost, whether  it be rebidding a contract or looking for a lower utility supplier.

“Sometimes,” he notes, “when a site has been in a contract for a long period, the price … continues to climb. New companies are usually willing to lower the prices to  what you may have been paying five or six years ago.”

During the review of all expenses, current numbers should be compared to a year,  or even just a few months, ago. What costs have gone up? Is the super suddenly  buying more of the same maintenance supplies? Why?

After a property has discovered areas where there is excessive spending, it can  look for ways to trim those expenses. For some buildings, purchasing supplies  in bulk might be a major step toward curbing costs.

When it comes to ordering supplies, a lot depends on the size and type of  association, the experts say. “There are smaller buildings with far less sophisticated methods of doing it: You  must buy things, you try to get the best deal that you can, you look at the  catalogs and compare it that way,” Luckman says. “Other buildings could be more sophisticated and they do have some inventories.” Often, he says, he will review bills that a super or maintenance person has  purchased, and consider whether the association can get a better deal. With  today’s technology, he notes, in addition to talking to the association’s regular vendors, “it’s easy to get online and check prices on various things.”

Just as the size of the individual property can affect prices, so, too, can the  size of the management company, Wholley notes. “With a large company such as The Niles Company, managers sometimes can buy in  bulk, whether it be ice melt or office supplies, and save the client—as opposed to buying supplies from the local hardware store. At most sites, the  superintendent will do the ordering of the day to day supplies and each week  the manager will check all invoices and talk to the super to find out where the  supplies are being used.”

Wholley acknowledges that his personal attitude toward watching expenses spills  over into his management style. “I’m a great consumer by my very nature. I am driven, not by cost necessarily, but  by value—because sometimes you do pay more to get something, and sometimes it’s not the product, but you’re getting the service, or you’re getting the guarantee, and you’re willing to pay a little more for that particular product because you know the  person is going to be there for you.

“So I’m value driven, but it just goes against my grain to pay more for something that  I need than to pay for it to get what I want.” Even when he’s not directly involved in purchases, he regularly reviews the spending of a  building’s administrator to evaluate whether the association is getting the best bang for  its buck.

“Whenever possible, if we have storage at a property, we always buy in bulk if we  can,” Luckman says. “Once we establish it’s a good price, you save on shipping, you save on a lot of things.”

Having a relationship with vendors is also a plus, the managers agree. “Most of my properties that have outside cleaning firms, we negotiate the price  [of supplies] into the contract, and you can find that it can be very, very  competitive for a number of reasons,” he says. “First, they buy it in such large quantities, because that’s what they do, so you can get their deepest discounts. Second is that they’ll very often provide that as an incentive to get the contract and they’ll throw it in at their cost or, or less even, to get your business … So check with the vendors who are performing the services,” he suggests.

Bonariggo, who manages and participates in multiple associations as a trustee/board member, says that in addition  to purchasing things like cleaning supplies in bulk for groups of associations,  “it has also been helpful to participate together when looking at service  contracts with cleaning services, elevator maintenance and insurance bids.”

And although keeping an eye on these costs is part of the manager’s job, board members can also play a role in watching those expenses.

“Trustees and board members should absolutely be involved in assessing  expenditures, whether they are self-operated or working with a management  company, “ Bonariggo says. “The fate of their investment is directly related to the operation of their  association.

“The best way [for trustees] to be involved is to review contracts yearly; don’t let contracts roll over without reviewing them.” At that annual review meeting, she says, “owners may consider getting new bids on certain services where they think  dollars may be saved.”

Luckman also encourages board members, especially treasurers, to get involved—if they want to do so. “Some boards will be very involved with it; others are hands-off; they’re paying the managers, they don’t want to have anything to do with that,” he says. Board members may want to make the “big” decisions, but leave the everyday decisions about items like supplies in the  manager’s hands.

One system that works well at his company, Luckman says, is having a single  person in charge of a major bulk purchase covering several associations. With  ice melt, for example, that purchase will be made in the off-season when prices  may be lower and free shipping available. “Most of the individual managers on our sites will take advantage and buy at that  point because they know it’s a good deal and it’s easy,” he says.

There are, however, limits to when it makes sense for a manager or super to  spend time and effort shopping around for the best deal. “Sometimes going the cheaper route is not always in the best interest of a  client,” Wholley says. “You want to make sure that when a chiller goes down on a Friday afternoon that  the company you hired is going to be there for you. This doesn’t always happen with a smaller and cheaper company. Though occasionally we do check other companies to be sure we are getting a  competitive price, you don’t want to be changing companies every year,” he says.

“When owners see the same workmen in the building year after year, a certain  trust is established—and sometimes the small saving of a new company is not worth the change,” adds Wholley.

At the same time, Luckman notes, for large management firms and large  associations, “supplies of this nature are really a small line item” when considering a budget that might run to a million dollars or more.

But even small items add up, he concedes. While watching the bottom line has  always been important, he says, in today’s economy “we do look a little more closely at everything to see if there is any fat we can  trim on all of the items. It’s always been important to us, every single thing, but now we’re reviewing everything. Everybody’s tightening the belt.”

Lisa Iannucci is a freelance writer and a frequent contributor to New England  Condominium. Editorial Assistant David Chiu also contributed to this report.

Understanding the Scope of Management Responsibilities