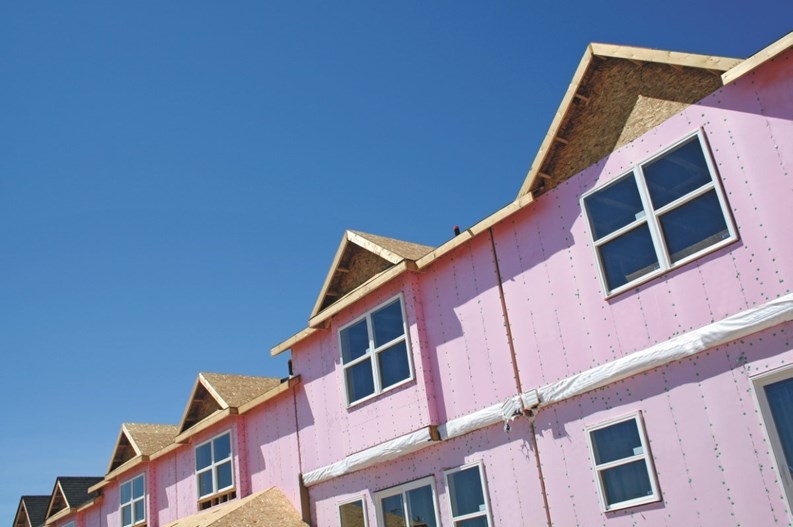 With oil prices soaring and talk about "going green" on everyone's lips these days, homeowners and developers alike are making an effort to button up homes to keep warm air in and cold air out.

But those efforts to increase comfort levels while decreasing fuel consumption may be wreaking havoc in places that no one sees.

Moisture, it seems, has a knack for finding its way into the cavity between the interior and exterior walls of a building. And modern, energy-conscious building techniques, combined with owner efforts to stop annoying drafts, traps that moisture, offering little opportunity to dry out.

The result: rot and mold.

Not a pretty thought, to be sure — but one that industry professionals like Ralph E. Noblin, PE, of Noblin & Associates, L. C., Consulting Engineers, are seeing with increasing frequency.

"In the old days," Noblin said, "back 100, 150, 200 years ago, wall assemblies were porous on both sides." Buildings were sheathed with individual boards that had, or developed, gaps between them. There was no insulation in the wall cavity. Air flowed in and out, creating a drafty home environment. And if water, driven by rain or sheeting down a wall, entered that wall cavity, the regular flow of air dried it out quickly.

Fast-forward to the late 20th century, when energy conservation became a buzzword and homes were tightened up, creating more comfort for inhabitants, and less fresh, drying air for building components. "With today's wall assemblies," Noblin said, "the moisture can sit for months."

Looking at the average condominium unit, he said, "On the inside, you have sheetrock, or gypsum board, and a vinyl wall covering over that, which can serve as a vapor barrier. Under the sheetrock, the builder has put a 6 mil polyethylene on the wall studs, and behind that, you have fiberglass insulation."

On a hot, humid day, the inside of that cavity can be soaking wet because the temperature inside may be lower than the dew point of the air, causing condensation to gather.

Old houses, which might experience 10 air exchanges between the inside and outside per hour, tended to be drier — causing residents to use humidifiers to increase the interior air to a comfortable breathing humidity level. "Now, you're lucky if you get one-half exchange per hour," Noblin said, with the combination of insulation, tight windows, caulk, plastic sheathing and plywood exterior. While there is a level — different for everyone — at which the air's moisture level is comfortable for those living in the home, people should be aware of the need for ventilation.

With so little air movement in today's homes, wet studs, insulation and sheathing in the walls soaks up moisture and never gets the chance to dry out.

And if the construction combination isn't enough to create issues within the walls, Mother Nature regularly steps in to lend a hand. "Here in New England we have nor'easters, with wind-driven rain. Every assembly out there, under the right conditions, is going to let water into the wall, where it's going to stagnate because there's no air flow," Noblin said. "It starts to fester and rot out, particularly the wood sheathing on the walls."

While homes of the mid-20th century were often sheathed with plywood, over the years a myriad of other products have come into use, some good and some not so good, he said. Common in the condominium construction arena, especially during the boom years of the 1980s, was the use of a variety of materials including Thermo-Ply and Oriented Strand Board (OSB).

"OSB is like a sponge, and the fiberglass insulation is sponge-like." Framing lumber, too, such as spruce, pine and fir, are not as resistant to water as the lumber used a century ago. These products are installed without gaps between the pieces, so unlike the boards of a century ago, they don't permit air to flow through the wall — which is good in terms of keeping heat in and cold out, but not good in terms of staying dry. I've seen buildings that are less than 10 years old, less than five years old, where I couldn't believe the rot," Noblin said.

Before you know it, he said, a building's structural integrity can be compromised. Noblin said one condominium he worked with hired a contractor to replace the trim boards — and the contractor used longer than usual nails in order to find something solid to hold the trim. The underlying rotten wood components were ignored; after all, the contractor had only been hired to do the trim. And what homeowners don't see, they don't know.

Due Diligence Comes into Play

So what's a homeowner, or an association, to do?

"It all revolves around due diligence, around the board's fiduciary duty," Noblin said. "Every condo association should be inspecting their property on a regular basis, looking at these issues. They're kidding themselves if they think their buildings are not letting water in."

The water enters the building envelope, he said, through cracks in the clapboards or cedar shingles, cracks around the trim. And it ­doesn't take a driving wind to push the water inside. Many new condominiums werebuilt with emphasis on aesthetics — which often means that there are no gutters and downspouts. Water coming off the roof simply sheets down the side of the building … and right into the wall cavity.

"Gutters will contain the roof water from dropping down along the outsidewall, and splashing up against the wood siding," Noblin said. "Gutters and downspouts should be used on just about every building in New England, because they control roof runoff." To be sure, the gutters and downspouts require some maintenance, but in addition to combating wall deterioration, they combat wet basement conditions.

And although they like to think of condominium living as maintenance-free, owners should not consider themselves completely off the hook when it comes to seeing that the property is cared for properly. "When you arrive home, look at the building before you drive into the garage. If you live in an end unit, you may be the only person who ever sees that side of the building. Look it over, and tell the association board if you see a problem," he said. "And avoid excess interior relative humidity during the winter months."

"Every homeowner has a vested interest in maintaining the integrity of the building," Noblin said. "This is probably your biggest financial investment. You're kidding yourself if you don't take an active role in ­protecting it."