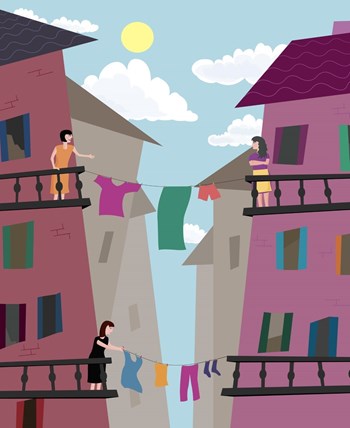 From Connecticut to California, homeowners—including condominium-dwellers—are looking for ways to cut energy expenses. And, increasingly, their attention has focused on an appliance recognized as an energy hog: the clothes dryer.

The alternative to the dryer, one of the major consumers of home energy, is obvious. The lowly clothesline, long disdained as old-fashioned, or worse, is being promoted by everyone from former vice president Al Gore to officials at the U. S. Department of Energy.But the rock-star status of the clothesline stops at the driveway of most community associations across the country. Homeowners like Mary Lou Sayer of Concord, New Hampshire, and David Duval of New London, Connecticut, have made headlines lately by suggesting that community association rules prohibiting clotheslines are, in Duval’s words, “ridiculous” and should be outlawed.

In recent months, the tug-of-war between homeowners who want to save energy by hanging their laundry out to dry and those who prefer not to see their neighbor’s clothes flapping in the breeze has escalated along with the rising cost of energy.

And in state after state, the “right to dry” contingent is pinning its hopes on legislation that will override association rules banning clotheslines. “We have active members in all the New England states,” says Alexander Lee, founder of the Concord, New Hampshire-based Project Laundry List. His advocacy organization (which can be found at www.laundrylist.org) has been talking up the benefits of clotheslines for a dozen years. And as energy costs—and interest in energy conservation—have soared, the issue has moved to the front burner for voters and legislators.

The 2008 legislative sessions in Vermont, New Hampshire and Connecticut all entertained bills that, to one degree or another, would prohibit bans on outdoor laundry lines.

But despite the passion of clothesline proponents, none of the bills has become law this year.

The battle being played out across the nation has pitted the individual homeowner’s right to let it all hang out against the community’s right to establish rules, and so far, legislatures have been loath to step into the field of fire.

“We see the clothesline as representing several crises we have right now,” says Martin Mador, chairman of the Connecticut chapter of the Sierra Club. “We have an energy crisis. “We don’t have all the energy we need and the only way to get more is through means that are environmentally-destructive. So the best solution we have to the energy crisis is conservation and efficiency.” Adding to the problem, he said, are the global warming crisis and a fiscal crisis related to the cost of buying oil overseas.

“We can address these problems on many different scales,” Mador says, ranging from international approaches like the Kyoto treaty to backyard solutions as simple as the clothesline. “Right to dry” legislation is one means, he says, of people taking ownership, taking action to address the crisis situation.

And on a practical level, he notes, homeowners can save 6 to 10 percent of their energy costs by leaving the clothes dryer off and returning to the good old-fashioned clothesline. Supporters of the clothesline bill in Connecticut have estimated that the average household could save $200 a year by abandoning the clothes dryer and returning to outdoor drying. A staunch proponent of right-to-dry legislation, Mador says, “We’re not trying to force everybody to do it (use clotheslines) but we feel they should be free to if they so choose.”

The problem is that many of the 300,000 association-governed communities in the United States have some kind of rule limiting or prohibiting clotheslines. “The right-to-dry issue is really part of a bigger issue,” says Frank Rathbun, vice president of communications and marketing at the Community Associations Institute (CAI) in Alexandria, Virginia. “There are hundreds and hundreds of things that associations and individuals can do to protect the environment,” and communities are free to adopt approaches that make sense to them. CAI, he says, doesn’t take a policy stand on the regulation of clotheslines, but “we believe that association residents should be the ones to choose the rules under which they live.”

Legislation like that proposed in Connecticut, New Hampshire and Vermont would take that sovereignty away from the association. “We just feel that residents and their association boards should make the decisions,” Rathbun says. CAI, which describes itself as “a national organization dedicated to fostering vibrant, competent, harmonious community associations,” says that associations should regularly review their rules and regulations, and consider changes to meet a community’s changing needs and interests.

“It’s important to remember that homeowners can modify a rule or even eliminate a restriction if there is enough resident support for a particular change. CAI recommends that associations conduct periodic reviews of their rules to ensure they still have the support of residents. A rule that residents wanted 10 years ago may not make sense today,” he says.

But Suzanne Harvey, a New Hampshire state representative who filed “right-to-dry” legislation in that state this year, notes that many associations are still operating under rules that were created by developers—possibly decades ago. “There are communities here that are thirty years old, and I’m sure the bylaws are that old, too,” she says. Harvey understands the issue first-hand: She lives in a condo where outdoor drying is prohibited. And she admits that like many condominium buyers, “we probably glanced at the multi-page document” containing the community rules and regulations before signing on the dotted line.

“Unless something comes up that really makes condo owners look at the bylaws, they probably don’t,” Harvey says. “So we put together a bill, and it went up against the ‘contract clause’ … that was the problem and why it didn’t pass as written,” she notes. “I knew it would be an issue, but I thought we had a good argument and good precedent.”

The bill, H1523, went to the Municipal and County Government Committee in January and was deemed “inexpedient to legislate,” killing it for this year’s legislative session. But while the bill failed, Harvey says, “we had a lot of folks in the Legislature who thought it was a great idea and that it could have been passed” if it had gotten past the committee stage. “To me, anything to do with energy is important to consider,” she says. With that, Harvey isn’t ruling out another run at the issue next year.

After all, she says, the goal of her bill was simple: “I wanted to have parity with people who live in individual houses.”

CAI’s Rathbun, however, points out that on any issues— including environmental topics, it’s up to “homeowners in each community (to) make informed decisions on policies that meet their needs and preferences. Such efforts provide sustainable, consensus-driven decisions that reflect the values of the community.

“While we welcome the input of environmental groups, government and others,” he says, “we do not believe government at any level should attempt to micro-manage private community associations. We believe the nation is better served when our collective resources are dedicated to broad environmental issues, such as alternative fuels, resource recovery, land-use, public transportation, emissions and fuel economy standards.”

Lee, of Project Laundry List, says the New Hampshire legislation suffered as much from procedural problems— being sent to the Municipal and County Government Committee instead of a committee that might have been more amenable to the idea—and from timing—being taken up on the second day of the session, just before the presidential primary election— as from any issue of merit. “The absolutely absurd thing was that they had already passed a law requiring towns and community associations to allow wind systems in backyards… to create energy” and then blocked legislation allowing “the ancient and venerable clothesline.

“The real crux of the matter,” he says, “is aesthetics.”

“I don’t want to trample on people’s sense of aesthetics or dictate to them,” Mador adds, “but we’re facing an energy and global warming crisis. And when you weigh the two, you have to come down on the side of energy conservation.”

While energy and conservation may be the driving force behind much of the legislation being considered, for many on the front line of the right-to-dry battlefield, the issue comes down to a “poor” connotation that clotheslines carry. Some folks simply don’t like to see everyone else’s unmentionables on the line. And in some communities, close quarters don’t allow for much privacy—or offer neighbors an escape from someone else’s laundry flapping across the patio.

“There are three major objections to clotheslines,” Lee says. “There’s the idea that property values will drop, which is a self-perpetuating myth. There’s the snobbery objection. And there’s the prudery objection.”

But, he says, getting outside to hang laundry is “therapeutic… it puts you in touch with nature.” Lee acknowledges that not all communities are physically conducive to having individual clotheslines, but legislation is being written in a way that offers communities leeway— permitting them to set up common clothesline areas, for example, if lines in individual backyards are not a viable option. “To be fair, every building is unique; you can’t treat everybody exactly alike,” he says.

Still, across the nation, “right-to-dry” bills are facing an uphill battle. Most recently, the Colorado House and Senate passed clothesline legislation, and if the bill is signed by the governor, it will become only the second such law in the country. Florida has had similar legislation on the books for two decades—although Lee says the law is often ignored by associations that continue to impose clothesline bans.

While all three New England bills failed this year, it won’t surprise anyone if the issue resurfaces for the 2009 sessions. Mador is actively inviting people to contact him (at mador@sbcglobal.net) to join in advocacy efforts on the right-to-dry front. And he’s undaunted by the bill’s failure this year. Legislation, he says, often doesn’t pass on the first try.

He’s not ready to hang the issue out to dry.