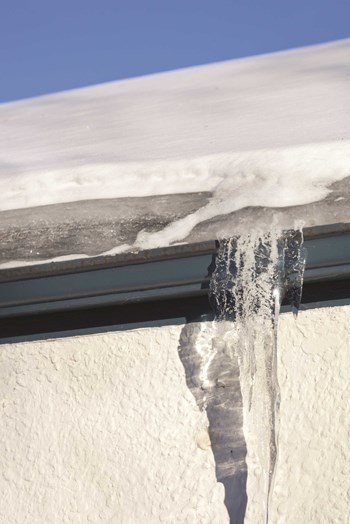 It’s a very special formula, says Ralph Noblin of the professional engineering firm Noblin & Associates. In New England, we literally went close to 20 years without that formula coming together. As a decades-long veteran of condo engineering, the Bridgewater-based Noblin has seen that formula—heavy snow and little wind followed by sustained cold temperatures—converge many times. And when the proper ingredients do combine, they all add up to ice damming—a costly headache for condo boards, property managers, and even unit owners themselves.

Basically, an ice dam is a ridge of ice that builds up along the edge of a roof. The ice creates a dam that backs water up and under the roof shingles.

“The fundamental problem,” says Noblin, “is that when the attic is warmer than the outside temperature, the attic is warm enough to start melting the snow.” From there, the newly-liquified water flows beneath the rooftop snow layer, eventually gliding to the roof’s edge. Upon reaching the overhang, the ambient freezing temperature returns the water to a solid state. And it is this insidious freeze-thaw cycle that begets the formation of an ice dam, a time-sensitive problem that can quickly lead to costly water damage.

For many property managers, the winter of 2010 was particularly problematic. “We were getting to be near one of the top ten years in snowfalls,” says Irene Morrill of the Massachusetts Institute of Insurance Agents. “We pretty much had a lot of snow—one storm after another—and then it was cold and never got to really effectively melt off the roof. You get a lot of snow, and then the heat from inside the buildings rises. And it’s cold outside but warm underneath. And it melts and thaws, melts and thaws. A few years ago—could have been ten years ago now, there was a worse time—but last year was pretty bad.”

Although ice damming is a potential issue for many structures in a cold-weather climate, the problem is often more severe with condo properties. “When architects design condominiums, the last thing they want it to look like is a big commercial warehouse-type structure. They want it to be soft, to be aesthetically-pleasing, to be attractive,” says Noblin. “They’ll introduce dormers and valleys and different things up on the roof. And they’re what we call snow-catchers.”