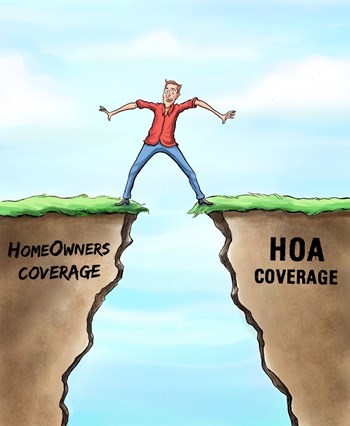 Too often, association boards—and condo residents—discover serious coverage gaps in their insurance policies in the face of a  claim. And often, the gap occurs when neither group wants to pay a high  deductible.

In recent years, deductibles have risen from $1,000 or so to $5,000, $10,000 and  far higher as condominium associations try to lower their premiums by  purchasing coverage with a high deductible.

What happens next is predictable. After a flood, a fire, or similar damage, a  unit owner is left facing a high deductible because the community’s master policy deductible is so high. It may not even make sense for the  association to file a claim—as when an $8,000 damage claim is made against a policy with a $10,000  deductible. A high claim record leads to higher insurance rates, so  associations may wish to avoid small claims.

Often enough, the condo owner’s insurance doesn’t cover that deductible. Perhaps it’s as high as $10,000 or $15,000 dollars on a $25,000 (or higher) repair.  Traditionally, the deductible is the unit owner’s responsibility. But try to get them to see it that way. In fact, says one  agency professional, insurance rates are rising after a long period of  stability, so one may expect to see more of these high-deductible situations. A  community association is, after all, obliged to save money where it can.

That’s fine—when everyone understands who pays what after a claim. There may, however, be a  widening gap between unit owner expectations and the association’s policy, giving rise to disagreements that delay repairs or lead to lawsuits. Yet, there are relatively simple solutions, too often ignored by associations  and individual owners.

Here, for instance, are some situations leading to trouble:

• Responsibility for property areas isn’t clear, or hasn’t been updated in years;

• The association hasn’t communicated enough about deductibles with unit owners, who ignore advice to  get so-called “gap” insurance;

• A board fails to inform its agent promptly of a potential lawsuit—if anything changes, filing is complicated.

“The first one is the interplay between the HO-6 (individual unit owner’s policy), for his contents and damage to contents, with the ‘master’ policy.” The master policy is coverage a condominium association takes out to insure  common elements, or the “envelope” of the site—such as roofing or siding. Differences arise between what’s included as [covering] “the unit” as opposed to “common elements.”

An HO-6 policy is typically for owners of co-ops or condominiums. It provides  personal property coverage, liability coverage and specific coverage of  improvements to the owner’s unit. Insurance provided by the homeowner’s assocation covers most of the actual structure.

“If you (an association) don’t require the unit owner, under your governance documents, to carry an HO-6  policy, and they don’t, and there’s a casualty loss, they can only claim through their association’s master policy. It becomes an issue of what the master policy will cover, and  how much of a deductible they may have,” stated Rosen.

“We had a situation in a very high-end condominium that had a very significant  fire casualty loss, involving several units which didn’t have an HO-6, and claimed through the master policy,” Rosen said. “Under these documents, many times the trustees become an insurance fiduciary—they control the funds, and they decide what’s going to get fixed and what’s not going to be fixed (high-end fixtures, expensive custom work, etc., that an  owner has installed). The entire loss isn’t always covered; it just doesn’t work that way.”

Insurance professional Bernie Gitlin, executive vice president at Risk  Strategies Company in Randolph, Massachusetts concurs. An association could  forestall problems by carefully educating unit owners on the policy in advance.  Once damage has occurred, there may even be misunderstanding over what  qualifies as an improvement, he says. Vague documents create problems, as does  lack of awareness of the policies. “If there are improvements done to the unit after it was originally developed, in  some associations the unit owner is responsible for them,” Gitlin said. “Or, more problematic, the policy might say the unit owner is responsible only if  they haven’t reported the improvement to the association.”

With rates about to rise after nearly a decade of stability, says Gitlin,  associations are anxious to keep their claims history low. To an extent, he  blames unit owner demands for increased rates. “They should not treat the association like it’s the landlord in an apartment building. It’s a lot easier to get a unit owner’s policy than it is to get an association policy if it’s had a lot of claims for damages. They’re not a maintenance policy, there to handle the small stuff.” If an association caters to the unit owner too often, he says, the result may  be great difficulty—or great expense—in obtaining its own master policy. “The insurance company is going to put a high rate on you, or not cover you at  all,” Gitlin said.

Just who pays what is debatable. Attorney Stephen Marcus of the law firm of  Marcus, Errico, Emmer and Brooks, P.C., in Braintree, Massachusetts, comments, “Normally, barring any negligence, the associations have the unit owner who  sustains the damage pay the deductible. If they (the owners) don’t have the insurance, they’re going to be responsible for the entire amount of the deductible.”

David J. Levy, PCAM, a property manager and president of Sterling Services in  Holliston, Massachusetts, says threats and blame fly back and forth in the wake  of a widespread damage incident when the deductible hasn’t been anticipated. “Someone’s lack of preparation becomes your emergency; it makes your job as a property  manager harder.” The profusion of ice dam incidents during a recent bad winter is a good  example, Levy says. A facility with 2,500 units—500 of them leaking at the same time—has to triage its repairs and balance needs against disgruntled unit owners “who may not have the right insurance.”

Unhappy owners say they didn’t have money for insurance in the first place, or threaten to get an attorney,  Levy says. “And that attorney is just going to tell them they should have bought insurance.”

Protection against deductible gaps doesn’t even begin to reflect the underlying problem—total lack of coverage. “Something like 40 percent of the owners don’t buy condo insurance,” Levy says. “I bombard them with information, but to compel someone to do that, you have to  have the power to compel them. Boards don’t have that power.” He’d like to see the laws changed, but for now his job is to inform the association  of any damages so they can assess the need for a claim. “You may have a multi-million-dollar policy with a $500,000 deductible,” Levy said. “If a claim is for a small loss, by scale, the association may want to  self-insure the loss.”

Sometimes an association doesn’t want unit owners to absorb the costs alone, and will share the burden with the  unit owner. “Homeowners need to know in advance, by policy, how a claim can be administered,” Levy said. “Some boards are more pro-owner, others more HOA.”

In the ice dam situation, for instance, he says “half the boards we deal with would put in a claim, and half would not—under the same policy, with the same deductible. Some may say ‘This is New England; life’s not fault-free, etc.’ ”

“The attorneys make a recommendation about what to do, with the pros and cons of  doing more than the minimum expected.” Sometimes, Levy says, HOAs will cover the damages from a first incident in  full, with an agreement to reduce that share if further occurrences happen. It’s important to communicate that policy ahead of time. Ideally, the unit owner  would have insurance that dovetails with the master policy.

Stephen DiNocco, CMCA, AMS, principal of Affinity Realty & Property Management, LLC, Boston, agrees the gap is here to stay unless unit  owners get covered. High deductibles are a force to be reckoned with.

“I don’t see any way around it, personally. Nobody wants to deal with the high  deductible, and nobody wants to pay the extraordinary high premiums.”

“Condo documents are woefully inadequate,” says DiNocco. “The whole industry would benefit from clearer language as to who is responsible  for the deductible. If (laws) made the unit owner responsible, they could go  out and get their own insurance. A surprisingly large number of them do not. We  say ‘you are responsible; you can purchase a small amount of coverage—it might cost $30 a year—and it will pay for your deductible responsibility, in most cases’. And they don’t buy the insurance or, more frustrating, they have the insurance and won’t use it (trying to keep their own rates down).”

DiNocco says updating condo documents is valuable. He’d also like to see the laws change, allowing condo associations to carry  deductibles as they see fit, with the unit owner held responsible for covering  his or her own deductible. “It would help to control claims, so the association can maintain a favorable  claims history, and make unit owners more responsible, giving them an incentive  to take care of their property. Even though it’s crystal clear to me that unit owners are responsible for repairs to their own  unit, there’s this ambiguity, this fuzziness, over who is responsible for the deductible.”

If owners refuse to make repairs, say after a flood, the situation compounds. “They may do nothing beyond opening windows to dry out,” DiNocco said. “Then you get mold, and a much larger problem than there would have been if they’d had their own insurance to do that. Make it the law.”

For current law to change, an association, and its attorneys, might have to  pursue it. “CAI (Community Associations Institute) could put a committee together to make  recommendations to the attorneys, who could vet the legal aspect of it—and that could be presented by a representative or senator from the state as a  bill.”

Despite the confusion, DiNocco’s firm hasn’t experienced association clients in major difficulty. “In most cases,” he says, “the insurance we’ve had has worked out pretty good. With multiple units, the deductible may be  assessed to people affected, or the association could assess all the residents  for it, which lowers each person’s share of a claim deductible considerably—and sometimes that’s all there is, a single claim.”

But some associations don’t want to impose that on non-involved residents, or they may not know how to go  about it—as when the condo has vague ownership policies. “You have to be very clear about responsibility and ownership,” DiNocco says. “Not, ‘I own the window, you own the sash,’ or, ‘The association owns the door frame, but the unit owner owns the door.’ Or, maybe the unit owner owns the door but can’t paint the outside of it. The idea of responsibility gets very gray.

“It’s crazy,” he said. “It’s not easy to do repairs or handle coverage in an insurance loss.”

Ann Frantz is a Massachusetts freelance writer and a frequent contributor to New  England Condominium. 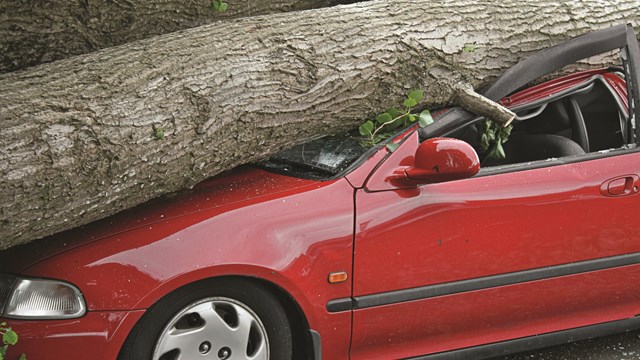 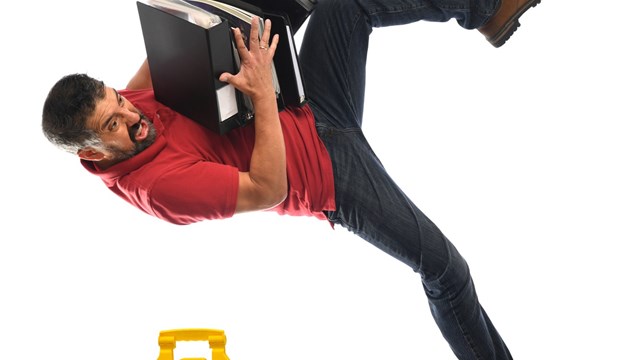