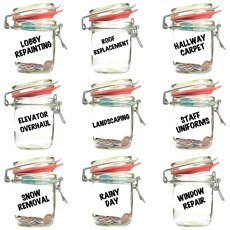 These days, just about everyone is cutting back on spending, either to make ends meet, saving for something special or a rainy day, paying off debt or funding their retirement. Consumers are cutting coupons, looking for deals and keeping a close eye on their dollars. Whenever costs or fees go up and consumers have to pay more, they invariably get upset.

The last thing that residents want to hear is that association fees are being raised. Realistically though, to keep a building properly cared for and thriving financially, fees will need to be raised regularly and fairly. And, in some cases, associations are forced to raise fees because they haven’t put enough money aside for a major repair.

Stephen DiNocco, principal of Affinity Realty & Property Management in Boston, estimates that approximately 25 to 30 percent of associations fail to either properly fund their reserve accounts or lack a viable plan or ability to fund when needed.

“Many associations have taken to funding through borrowing to supplement their savings plan,” DiNocco says. “So although reserve levels may be less than optimal, the capacity to perform is intact.”