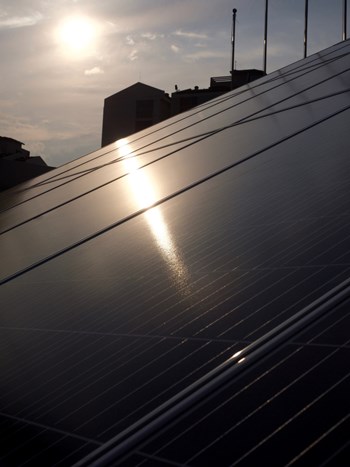 Energy costs are a major component in any housing environment, and one of the main areas where boards and managers look at to optimize efficiency and save money. One already popular — and growing — alternative to fossil fuels is solar energy. But how much solar can conceivably be produced in an urban environment, and how much will it really save?

Contrary to popular belief, the efficiency of solar is more dependent on the angle of the solar panels than how hot or cold the environment is. “Cold doesn’t hurt the efficiency of solar energy,” says Brian Haug, a solar energy specialist with Continental Electrical Construction Company, which has offices in Illinois. “As a matter of fact, solar works better when it’s cooler.” (More on that later!)

That said, solar is not as simple as it looks. “If a co-op or condo wants solar on their building in an urban setting,” says Haug, “there are a few challenges. One is that rooftops are typically small, though a flat roof does not make a difference in efficiency. A smaller rooftop will limit the size of the solar array you can put there.”  He adds that “with fewer sunny days, you may rely on other technologies too.” Solar will not meet 100 percent of your building’s energy needs. The question is, how much of your needs can be met by solar? The generally held consensus among solar professionals we spoke with is that solar can supply between 10 and 15 percent of a multifamily building’s energy needs.

How Does Your Solar Array Work?

When anyone–an individual owner or the co-op or condo–uses electricity, the usage is typically recorded on a meter.  Individual metering is the standard method by which electrical companies account for what you use. Solar energy generation works in a kind of backwards way. “The power generated by the solar array back feeds into your panel,” says Haug. “When you generate more than you are using, the meter direction will reverse,” indicating a positive outflow, reducing your consumption from the municipal energy provider. “Generally, this energy production is funneled to the meter for the common areas in an apartment building that runs house loads like elevators, laundry room, hallway lights, etc. It can benefit the common usage, but won’t supply individual apartment needs.”

This presents an interesting situation for many buildings. Assuming a solar array on the roof could produce significantly more energy than the property uses for common area electrical needs, how would that energy be distributed to individual apartment owners? Such situations might call for a return to master metering.

Prior to the energy crisis of the 1970s and the co-op and condo conversion boom that began in the mid-1980s, many apartment buildings in urban areas were master metered and offered free electric service to their renters. The energy crisis and the conversion boom led to a switch to individual metering. Few buildings today remain master metered. One of the unique efficiencies of solar power is that a master-metered property could, if the array produced more than the building needed for common usage, provide energy to individual owners at least in part. The arithmetic is simple. If your solar array produces more energy than you would require to operate your common areas, the local energy provider keeps a record of the extra output and credits it back when needed.  Most local energy providers will only do this on a yearly basis, however. If you produce more energy in a year than you use, it goes back into the grid, to the benefit of the energy provider. The key is to size your array to your needs, so as not to overproduce, thereby subsidizing the local provider for little actual benefit to your building.

“All solar panels are pretty much the same,” says Kristen Drigon, Senior Vice President for Corporate Operations at Trinity Solar, based in Wall, New Jersey. Trinity has been involved in solar energy since the early 2000s and sells solar installations in New Jersey, New York, Massachusetts, Connecticut, Rhode Island, Pennsylvania, and Maryland. “There are slight differences in output from one to the next.” The basic technology behind solar is quite simple. “Panels are attached to a roof through what’s called a racking system,” explains Drigon. “The panels are wired to inverters. The inverters take the energy generated by the panels, which is DC — direct current — energy, and convert it to AC — alternating current — feeding it back into your electric panel.”

“The most dramatic improvements in the solar industry,” Drigon says, “come in the form of new and different financing methods.  Is the purchaser going to own, lease or do a power purchase agreement (PPA)?”  According to Drigon, the potential user can purchase for all cash, perhaps arrange financing, lease from an entity that owns the installation, or sign a PPA with the entity that owns the installation. In the case of a lease or PPA, the user, say the condo or co-op corporation, would buy back the energy generated by the solar installation, hopefully at a lower cost than the energy they were buying from the local electrical company, resulting in an overall savings. In Drigon’s experience, most co-ops and condos purchase their installation outright and obtain their own financing.

One consideration for townhome-style condominium associations is whether the individual unit owners own the roofs to their units.  If they do not own the roofs, some solar financing sources will not provide financing for the project due to the split collateral.

How does a co-op or condo pay for the installation of solar panels? To a great extent that depends on the form of ownership. For a co-op, a fee simple property, solar power installations can be financed in very conventional fashion, through a refinancing of the underlying permanent mortgage, or through the placement of a second mortgage or line of credit with the property as collateral. Alternatively, in a condominium, where each unit is separately deeded, and the common areas are owned by the association, there is not enough collateral to provide for a conventional mortgage. Many lenders offer loans based on partial collateral and liens on the common charges and depository accounts held by the condominium association.

Barry Korn, Managing Director at Barrett Capital, a specialty finance firm in New York, handles energy-related loans for co-ops and condominiums in the New York and New Jersey area. In the case of co-ops, he will represent the corporation to obtain conventional bank financing in the form of an underlying permanent mortgage refinance with additional funds for the project, or will arrange secondary financing in the form of a line of credit or a second mortgage, provided the first will permit it.

“With respect to the size of the project,” says Korn, “for projects that are under $50,000, there are incentives available through NYSERDA [New York State Energy Research and Development Authority] for both co-ops and condos. NYSERDA provides subsidized financing rates. Under $50,000, they have an on-bill program.  The financing costs get added to the utility bill, provided the property is in an area where the utility pays a system benefit charge. Some utilities in Long Island don’t. Where you have a project that fits, you can get 10-year financing at 2 - 2.5 percent. For deals above $50,000, Barrett acts as a lender, providing financing at market rates. For larger transactions there are also solar credits of 30 percent at the federal level, which can be parsed to individual owners in a co-op or condo.”

Doug Coward is the Executive Director of Solar and Energy Loan Fund in Fort Pierce, Florida. His company, unlike many others, has an interesting and innovative approach to financing solar projects. His mission is to make solar installations affordable to those who need it most and might not otherwise qualify or be able to obtain conventional financing. “If you can’t afford the up-front costs of solar,” he says, “you can’t do the work, and take advantage of the tax credits.” While tax credits do vary from state to state, “most of it’s federal,” explains Coward. His company raises most of its money from faith-based investors, mostly Catholic congregations and organizations, seeking to create social, economic and environmental benefits, based on Pope Francis’ recent encyclical to promote clean energy. This allows them to take a whole different approach to underwriting.

Coward offers an unsecured loan based upon the ability of the borrower to pay back the loan rather than on the borrower’s credit rating and report. They offer an interest rate of between 5 and 9 percent. Typically, unsecured loans carry an interest rate of 17 percent plus. Coward reports a default rate on all loans of 1 percent, far below what is typical at a for-profit bank. “If they have income and can pay the loan, we build the loan around their ability to pay.”

Coward explains further that many solar energy-related loans are made through the Property Assessed Clean Energy (PACE) program, which is available in many locations nationally in one form or another. PACE will provide financing up to 20 percent of the assessed value of a home or condo for energy projects, but it’s a for-profit program and there have been some problems with unscrupulous vendors overcharging for solar equipment. PACE’s assessment is paid as part of the owner’s tax bill. The loan is similar to a tax lien on the property.

Coward also recommends that “before you go for a solar installation, do an energy survey and correct any problems like window and air-conditioning leaks first.  Reduce your energy demand first, then go for solar, when you know exactly what your needs are.”

What’s on the Horizon?

Alan Burchell, Founder and Principal of Urbanstrong, an alternative energy firm located in Brooklyn, New York suggests that the future of solar is intertwined with other forms of green energy. With respect to urban environments in particular, he advises combining the solar installation with a green roof.  “When you install a vegetative roof,” he says, “that roof can prevent the membrane from heating up.  At 90 degrees street level, the roof won’t go to more than 100, perhaps 110 degrees,” far lower than the 170-plus degrees mentioned earlier. “With a vegetative roof you can gain back 10-12 percent efficiency in summer weather conditions.

“Another innovation,” continues Burchell, “are micro-inverters. They allow for shade to fall on one part of the solar array without affecting the other panels in the array.” This is a huge innovation, especially for urban installations, where shadows can fall on array from any number of directions, including from neighboring buildings, or even the rows of panels in the array itself.

Drigon mentions the integration of battery storage systems with solar installations as a big step forward in the near future. These batteries will store excess power generated during the day to be used at night instead of sending excess energy into the grid and crediting back the savings when the property uses electric from the grid at night.

Solar energy is clearly a major factor going forward for co-op and condo properties. Finding the right combination of cost and efficiency is critical to your co-op or condo benefiting from a solar installation.