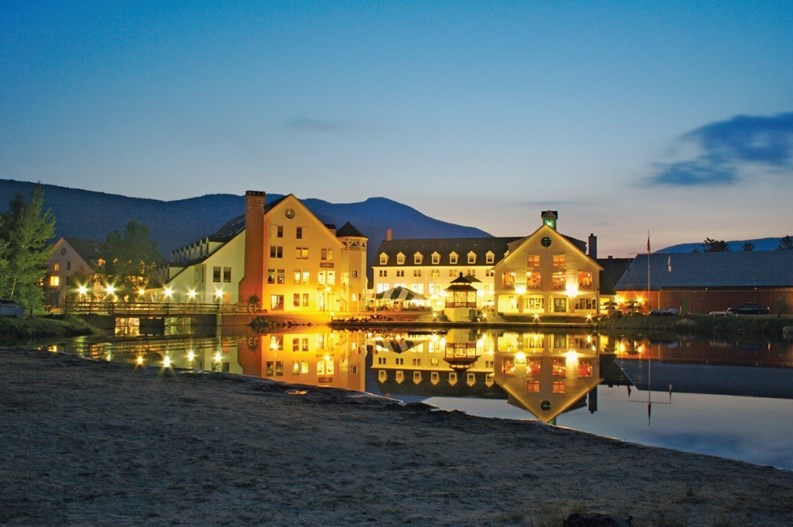 One of New England’s more unique resort communities, Waterville Valley, New Hampshire, beckons like  an oasis from the heart of the White Mountain National Forest. Two hours from  Boston and served by one main road – Route 49 –the village only claims about 300 year-round residents. However, from all  accounts, the community is bustling and open for business all year through.

Settled in the 1760s, incorporated as Waterville in 1829, Waterville Valley underwent major changes in the mid-1960s – and not in name only – when the Mount Tecumseh Ski Area started. Previously, the community had been a summer destination, with guests  vacationing at the Waterville Inn or one of twenty private cottages. Winter visitors didn’t start making their way there until after the Second World War. In earlier incarnations, Waterville had been a farming, and then a logging,  community.

In 1965, the Waterville Company, Inc., formed and began to develop the  multifaceted resort community best known for recreational skiing that exists  today. According to Kate Wheeler, associate broker at Waterville Valley Realty (WVR), the Waterville Company’s real estate arm, the entire village only comprises about 500 acres, about 91 percent of which has been developed. Wheeler admits that there is “not a lot of room to grow,” but waxes eloquent on how the valley, surrounded as it is by 44,000 acres of woods, is like“an island in the middle of the forest. It’s really unique geographically. I’ve never been to another place like it.”

In 2010, a change of ownership occurred when The Sununu family (New Hampshire’s most prominent political family) and a group of local investors purchased the  Waterville Valley assets from Booth Creek Ski Holdings Ltd., a California-based  company, according to Jan Stearns, WVR’s marketing director.

The assets have not been controlled locally for at least fifteen years, but with the new ownership, Stearns asserts, “the money that is made in Waterville Valley (and these facilities do make money)  will stay in Waterville Valley.” Chris Sununu and resort founder Tom Corcoran have been discussing ways to grow  the resort to fully realize its potential. Stearns quotes Sununu as saying, “The future of Waterville Valley will rest largely upon our abilityto create a more full vacation experience for families 365 days a year, for ages  one to one hundred.”