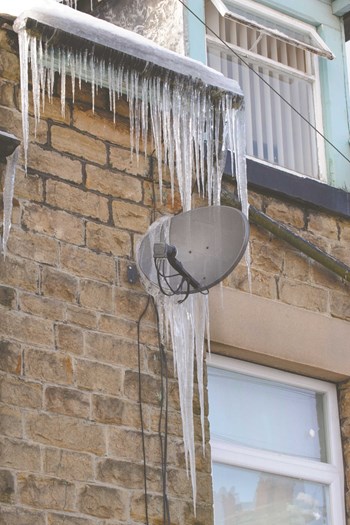 Winters these days don’t seem to be quite as brutal as they once were, due in part to the fact that in  recent years, the Northeast has had more flooding and ice storms than  blizzards. But pipes still freeze in the dead of night, and winter conditions  still take their toll on New England homeowner associations. Carefully-planned  landscapes can be brutalized by winter, with trees and other plantings damaged  or killed by the weather.

It isn’t just landscaping that can be harmed by winter’s harshness. If not prepared correctly for the cold months, parking lots can  become money-pits, while being fraught with potential liabilities. A series of  cracks or a small pothole might not seem like much in October, but the freeze  and thaw cycles could make matters much worse (and much more dangerous) very  quickly. Heating and cooling systems for homes and buildings also can be pushed  to their limits with the sub-zero temperatures, breaking at the chilliest times  when not properly maintained.

Taking the right steps to ensure the winter-readiness of a community should be  thought of as an investment that will save potentially thousands of dollars in  the short term. By avoiding costly breakdowns of systems and expensive  mid-winter repairs, HOA residents will save money while skirting the  inconvenience and hassle of a system breakdown. They also might save themselves  some worry.

When it comes to combating harsh winter conditions, the first and most primal  battle is keeping the cold out and the heat in. Proper maintenance of the  building’s heating-air conditioning system will help to prevent system breakdowns.  Regular maintenance of that system should include changing air filters  annually, and also cleaning the cooling system’s coils.

Such routine maintenance also can help residents save money on heating bills,  says Rich Vito, vice president of Suburban Service Corp. in Norwood,  Massachusetts. “Residue buildup can lower the efficiency of the system,” he says.

Vito recommends that a building’s heating system receive a tune-up from a qualified contractor each fall and a  tune-up of the air conditioning system each spring. As with any professional  consultant to a community association, such as an engineer or an attorney, a  qualified contractor should be an association’s go-to person for understanding its bailiwick of heating-air conditioning systems, weatherization of that HVAC system, and replacement of the system’s parts. Disregarding the expertise of such professionals could lead an  association to shoulder heavier utility bills, due to an inefficient HVAC  system.

Sometimes, the age of one’s HVAC system is enough to make it a candidate for replacement. “If a system’s 10 years old, you’re likely better off replacing it,” Vito says. “The replacement system pays for itself in energy savings.”

Before replacing its heating-air conditioning system, the condominium management  should make sure that doing so makes sense. If the association hasn’t done so yet, it should have a qualified contractor conduct an energy audit of  the community’s system. The audit will identify where the system’s potential savings are, if there are any to be found. The amount of potential  savings, in lower utilities costs and maintenance fees, can be significant.  Seventy percent of a building’s total energy costs are related to heating and cooling, Vito says.

Like a community association, individual condo owners should consider the energy  efficiency of their homes if they plan to stay there for five years or more,  according to Vito. Such a planned period of use of the home makes the  investment in a new heating system much more economical.

Often, when a heating-cooling system fails, it already has been pushed to its  limit. Then the inevitable happens and the system breaks down—usually on a sub-zero day. But such mechanical failures are not unable to be  prevented.

“The most important thing is to not to wait for the system to break,” Vito says. “People call me all the time and say, ‘I have no heat.’ They’ve been operating with a system that’s exceeded its useful life.”

The life expectancy of a building’s heating-cooling system is about 20 years. But regular changes in technology  have made the creation of upgraded systems far outpace the old systems’ life expectancies. Clearly, it is unwise to operate with a system that’s at the end of its lifetime. Doing so can be a costly proposition, which might  call for a short-term fix plus an eventual full system replacement. It is  smarter, and cheaper, to stay ahead of such breakdowns by doing the repairs and  replacements that will avoid them altogether.

It is easy to feel snug and isolated from the cold in a warm apartment, but most  residents venture out at some point during the winter, and in New England they  may find that their landscaping has been beaten up by the cold. Some evergreens  that are popular in the region, such as rhododendron and mountain laurel, can  become desiccated in the winter. The condition results in brown or black burn  marks on the leaves, and can hurt the plant while also looking unattractive.  The condition can be prevented with the application of an anti-desiccant on the  plant in mid-October or November, says Brian Churchill, vice president of The  Groundskeeper, of Ashland, Massachusetts.

At the same time in the fall, the condominium’s landscaper should do one last good cleanup of the property before the first  snowfall. Cleaning up the leaves and other debris on the ground at that time  will lessen the landscaper’s workload in the spring, when that debris will be water-soaked and more  time-consuming to clean up. It also will limit the chance of that decaying  plant matter adversely affecting vegetation in the flowerbeds. Many landscapers  like to do such a year-end cleanup before Thanksgiving.

A similar year-end system cleanup should be done to the irrigation system, which  should be shut off and drained. After being drained, the lines need to be blown  out with a compressor system by a qualified contractor, to ensure that no water  is in the pipes. Leaving any water in the irrigation system during winter could  result in fractures of sprinkler heads or cracks in the piping, which will need  to be replaced.

Failure to take this routine maintenance step could be costly. In addition to  possibly damaging the subterranean parts of the system, a condominium could  have freeze damage to the irrigation system pipe at the spot where it connects  to the building.

Some plantings in the flowerbeds of condo property might need some fall-time  attention, too. Many perennial flowers do better in the spring if they are cut  back in the fall. Rose bushes also often benefit from a good pruning prior to  the frigid months. For some communities, this autumn pruning will include  ornamental grasses, while other communities like the aesthetic look of the  dried out, dead grass providing structure to flowerbeds during the winter.

Annual flowers will be cut back at the same time, since they will have lost  their zest by then. Pansies and mums also will be dug up and removed at the  same time, lest they sprout on their own in the spring and ruin the look of the  flowerbed. Many landscapers do this fall pruning/digging after the first frost.

In the fall, landscapers also will deal with flower bulbs, removing tulips,  daffodils and crocus bulbs so they don’t come back half-heartedly and haphazardly in the spring. Most landscapers  recommend replacing all such bulbs yearly, since the bulbs are less productive  (in terms of blooming) the more years they are left in the ground.

Winter is tough on everyone, including the wildlife. Because of this fact,  wildlife such as deer can be tough on a condominium’s landscaping as they search for food in the freezing weather. Many deer will  eat shrubs such as arborvitae so voraciously that they will munch off all the  foliage on the plant during the winter. Replacing such shrubs, especially if  they are sizable and mature, can be quite costly—sometimes hundreds of dollars per shrub.

The shrub-munching problem has created a solution which, while not the most  attractive, is a lot prettier than bushes without foliage. In the fall, many  landscapers now wrap a nylon mesh netting around these deer-favorite bushes,  which makes it harder for the deer to eat, so they leave the plant alone.

Condo residents and managers should be aware that there is a window of  opportunity during which they can have repairs to paving done prior to winter,  and making repairs after that time, will be much costlier than doing the work  in the fall. This situation arises because most of the asphalt plants in the  area close down at latest in the second week of December. And while a few  asphalt plants are open occasionally during the winter, those business hours  are few and far between and only on certain days that could be weeks apart.  Worst of all, the asphalt available at the plants during those limited hours  will cost at least double its normal price.

That’s why it is essential to inspect your parking lots and take care of all  fractures in pavement around a condominium prior to freezing temperatures.  Preventive maintenance to parking lots and other paved areas is the obvious  answer to a simple cost-benefit analysis.

“You look at it from a liability standpoint, and [consider] what potential  problems could arise prior to April 15 when the asphalt plants re-open,” says Kevin Gosnell, co-owner of T&K Asphalt, of Whitman, Massachusetts. “You need to do things that give a good return on your investment. What could  become a pothole? Once the pothole happens, it will create severe damage to the  parking lot.”

When considering the winter-readiness of a parking lot, condominium managers  should ensure that the lot’s drains are structurally sound. Gosnell’s firm typically does a liability study and a structural study of the parking  lot in September or October. “Fixing it in fall will cost you half or less than it will cost you in the  winter,” Gosnell says, adding that a drain repair that usually costs $600 could cost  $2,000 in the winter, and often that winter repair is temporary.

To spot potential wintertime problems with paved areas, managers and contractors  always should scrutinize cracks in the pavement. Any crack that is a  quarter-inch or more in width means that the section of pavement needs to be  replaced with a new patch, all the way down to the subsurface. Broken-up areas  of pavement also can be problematic, and will buckle and become potholes.  Again, a thorough patch must be done on the section.

Snow-covered potholes can kill, Gosnell says. “I’ve seen a lot of situations where a person falls [in a pothole] and breaks a hip or  knee. Pregnant women have fallen due to these hazards, and lost their child,” he says.

But with a careful planning and some effort in the fall, condominium properties  can weather New England’s harsh winters without breaking the bank

Jonathan Barnes is a Pittsburgh freelance writer and a frequent contributor to  New England Condominium and other publications.