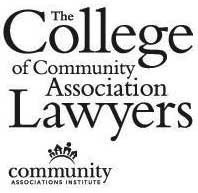 For nearly 20 years, the Community Associations Institute (CAI) has recognized  excellence in the practice of community law through the Falls Church,  Virginia-based College of Community Association Lawyers (CCAL). Of the tens of  thousands of attorneys practicing community law across the United States, less  than 150 have been granted exclusive membership in the college.

In 1993, the charter class consisted of 20 attorneys acknowledged by their peers  as having developed the field of community association law. This burgeoning  area of law focused on all areas of the law affecting community associations  such as enforcement of an association’s rules and governing documents, litigation, mediation, arbitration and contract  renegotiation and renewal.

“CCAL is prestigious in terms of what a lawyer does in community association law  and I think anyone who works hard in an industry likes to be recognized by  their peers, and that’s how you get in, by being recognized by your peers,” says CCAL member Charles A. Perkins Jr., Esq. of Perkins & Anctil PC in Westford, Massachusetts. “I think the CCAL designation is something that people and lawyers in the  industry pay attention to. They may say, ‘wow, he’s a member of CCAL, that’s pretty special. I bet he knows his community association law.’”

Experts in the Field

The members of CCAL are considered experts in the field of community association  law by their peers. The members distinguish themselves through their  contributions to the development of the profession. Their service is  demonstrated by a commitment to educate and empower boards and the 60 million  residents of the 300,000 community associations across the country. In  addition, CCAL provides a forum for the exchange of information among  experienced legal professionals working in the community association field  arena.

“I get calls all the time and get quite a bit of referrals,” adds Perkins. “There aren’t a lot of people in New England, especially Massachusetts that practice  community association law. You get a reputation, or your firm gets a reputation  for doing certain things. In some cases it’s personal injury law, in other cases it’s worker’s compensation, in my case it’s community association law.”

Since its inception in 1993, the founding principle of the CCAL is to promote  high standards of professional and ethical responsibilities in the practice of  community association law.

Other goals include developing and educating attorneys working in the field of  community association law, facilitating the development of community  association educational materials and programming related to legal issues for  use by other professionals and homeowners, cooperating with international,  national, state and local organizations, government agencies and other groups  having an interest in community association law and creating a community of  scholars to promote the professional development needs and career goals of CCAL  members.

In order to be eligible for membership in the college, an attorney must have a  minimum of seven years legal practice with a demonstrated concentration in  community association law, five of which immediately must precede the date of  application. They must be a member of the Community Associations Institute  (CAI) and have attended at least one law seminar within the last five years.  They must have demonstrated significant involvement in the provision of legal  services to community associations through the attainment of 12 out of a  possible 15 points, and finally, community association law has to constitute at  least 50 percent of their current practice.

“Becoming a member is not an easy thing to qualify for. It was a lengthy process,” says Perkins. “You have to have quite a number of benchmarks like the educational component in  terms of the writing and the teaching and being a member of the community.”

Perkins is one of only nine members of CCAL who practice across New England. He  became a member in October 2006.

Additional information on becoming a member can be found on CAI’s website http://caionline.org/career/ designations or by calling 703-970-9220. For questions regarding the application process contact Michael  Hedge, CAI’s Director of Government & Public Affairs at mhedge@caionline.org.

This year’s CCAL seminar was held January 26–28 in Palm Springs, California. Topics included Qualified Mortgages: New  Standards, New Challenges; Recalls: The Hidden Pitfalls; When a Director or  Manager gets SLAPPed: The Ins and Outs of Strategic Lawsuits Against Public  Participation, and The Ethics of Representing Associations During Times of  Owner Discontent.

“I attend the annual law seminar every year,” says Perkins. “They are great. I think the courses they have are superior. There’s always something there that interests you. Another good thing is that you get  to spend two or three days with people in the industry who you’ve known but don’t get to see on a day to day basis. You can find out what’s going on in their practices and talk about cases and situations. It is time  incredibly well spent.”

The College of Community Association Lawyers also hosts an annual trade show and  is active in legislative lobbying efforts in Washington, D.C. that affects  community associations.

Christy Smith-Sloman is a staff writer at New England Condominium and other  publications.