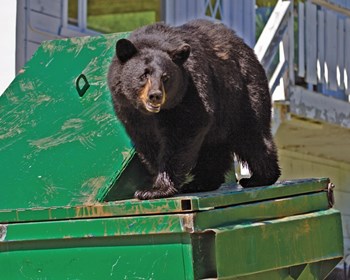 Ah, the return of spring and our feathered friends who make this season so special! Time to break out another bag of seed and fill up the bird feeder as the year-round bird population is joined by the returning migrants. Or is it? If your condo is close to woodlands, or in less settled regions of New England, birds may not be the only thing benefiting from your generosity. In recent years, more and more bears have been munching on seed put out for birds, creating problems for both humans and the lumbering creatures. Adding to the problem are unlocked dumpsters, creating another source of bear food.

As the bears have become increasingly dependent on humans for food in recent years, they’ve grown in numbers and become “habituated” to humans, associating them with food. It’s a dangerous development.

With all the eating going on, bears living near humans have become heavier and have been dubbed “Suburban Bears,” says Marion Larson, an information and education biologist with the Massachusetts Division of Fisheries and Wildlife. “They’ve been living high off the hog and are extremely fat… The suburban bears are very heavy compared to their cousins who live 10 miles out of town in the woods,” says Larson.

Some of the bears are getting so fat they’re not even bothering to hibernate, says Larson, who notes that hibernation is not weather-related as much as a response to a lack of food in the wintermonths.

In Northampton, Massachusetts, for example, “the bears have gotten quite used to people and in some cases they are actually hibernating under people’sporches,” says Larson.