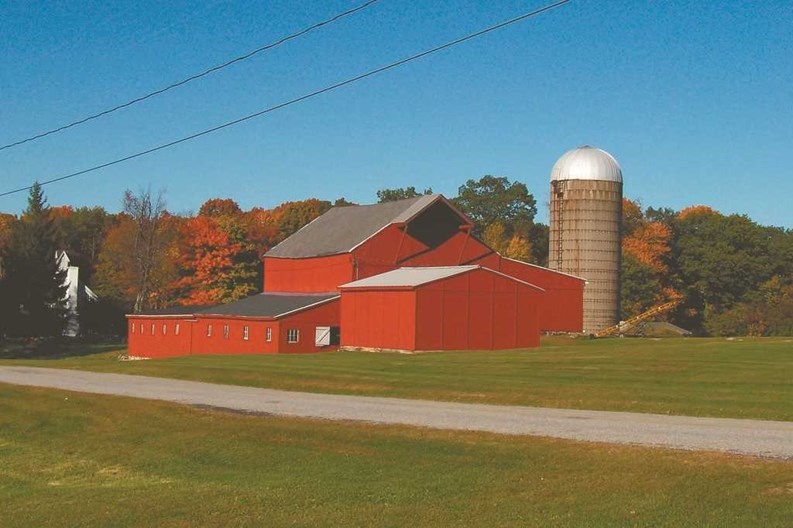 Actors Dustin Hoffman and Broadway composer-lyricist Stephen Sondheim call it  home. The late actress Marilyn Monroe did, too, when she was married to the late  playwright Arthur Miller. And actor and comedian Denis Leary lives here too,  with his own backyard hockey rink, tennis courts, stable and pool.

It is the “four-bury” region, comprised of the towns of Woodbury, Southbury, Roxbury and Middlebury,  in Connecticut’s lush, scenic western New Haven and eastern Litchfield counties.

The area appeals to a handful of celebrities, plus thousands of regular folks  who crave country living combined with nearby highway access that gets them to  the bright lights of Hartford to the north in under an hour or midtown  Manhattan to the south in slightly over an hour.

“We have it all here,” says Marian Van Egas, the top-selling real estate agent in Prudential CT’s Southbury office.

By “all,” she means the hills, valleys, lakes, horse farms and antique barns that make  rural life charming, plus the modern amenities of suburban living, including  excellent schools, shopping, a strong historical presence and a broad range of  housing options.

The four communities were originally a part of Woodbury, which was created from  Pomperaug Plantation, a parcel of land purchased from the Paugussett Indians in  1659.

The plantation was renamed Woodbury and incorporated into a town in 1673. Today,  Woodbury, with a population of 9,960, is known for its stunning Greek Revival  homes on Main Street and its designation as the “antiques capital of Connecticut,” a title substantiated by the more than 30 dealers here who’ve made it a mecca for lovers of old, rare treasures.

“We are the only Southbury in the United States,” says first selectman H. William Davis, Jr. on the town’s website.

The One and Only

That distinction is proclaimed on Southbury’s town seal, which reads “Unica Unaque,” meaning “The One and Only.”

In the 1920s, Russian expatriates Count Ilia Tolstoy, son of author Leo Tolstoy,  and George Grebentschikoff founded an artists’ colony at the end of Southbury’s Main Street. Known as Churaevka or “Russian Village,” it attracted such notables as composer Sergei Rachmaninoff. Most of its  immigrant population is now gone, but the community’s

St. Sergius Chapel remains and is listed on the National Register of Historic  Places.

In 1963, Interstate 84 opened, slicing through Southbury and forever changing  its rural farming legacy. Today, the town is home to Heritage Village, one of  the largest active living, over-55 communities in the United States, with 2,580  homes on its 100-acre site.

Southbury is the retail destination of the four “burys,” too, and its attractive town green and gazebo are popular meeting spots for  residents.

“Everyone gathers on the green for outdoor summer concerts and arts and crafts  shows,” Van Egas said. “Many people just come here to sit and visit with friends. It’s a beautiful spot.”

“Southbury is a beautiful town, quaint, with strong traditions, a lot of  diversity and nice, friendly people,” said Jeanette Pryor, an active volunteer at Sacred Heart Church and a resident  of Traditions of Southbury, a planned unit condominium development.

Middlebury, with a population of 7,343, according to latest figures, was  incorporated in 1807 and celebrated its bicentennial with a full year of events  in 2007. It is home to Quassy Amusement Park, a 103-year-old complex of roller  coasters, kiddie rides and water attractions, built on the south shore of Lake  Quassapaug.

Roxbury, the smallest and most rural of the towns, was settled in 1713 and takes  its name from a Native American word meaning “rocky water.” Its current population numbers 2,311 residents, including a cast of  celebrities.

“It was a farming community with 10 sawmills and mining on Mine Hill,” said Van Egas.

“You pay $5 or $6 a carload and the kids have a great time finding garnets here,” said Van Egas.

The town is equally proud of its antique barns, which were documented in Barn Stories from Roxbury, Connecticut: A Survey and Oral History.Antiquing is also another popular pastime in the area.

“We thought we’d find about 200 barns and other buildings, but it turned out to be closer to  300,” said Georgette Miller, a member of the Historic District Commission, which  commissioned the work.

“If we couldn’t save all Roxbury’s barns, we could at least document the ones we still have,” said Wendy Walker, commission chairperson.

Housing options in the “four-burys” run the gamut from delightful condominiums, many in active adult communities,  in the $75,000-$600,000 range in Southbury, Middlebury and Woodbury, to $6  million riverside mansions in Roxbury.

“Roxbury has no condominiums, but the other communities do,” said Van Egas.

Heritage Village, the oldest and largest active adult community in Southbury,  often has condos for sale, she noted.

Pryor moved to Traditions of Southbury when she downsized from her larger home  in Somers, New York, eight years ago.

“It’s a great community with young professionals to young families to retirees, very  diverse,” she said.

Middlebury has six condominium complexes, including an active adult community  now under construction with a pool, clubhouse, fitness center and movie  theater. Prices range from $120,000 to $600,000 depending on the complex.

People moving to any of the “four-burys” are happy with their decision.

“It really is a lovely part of Connecticut,” concluded Van Egas.