Do not show again [X]
By Debra A. Estock   2015 April Community Building 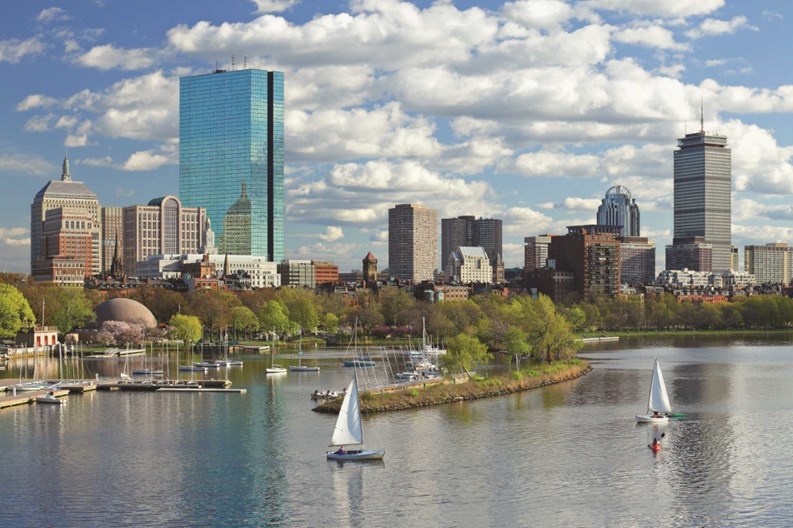 Boston, Massachusetts, which was first incorporated as a town in 1630, and as a city in 1822, is one of America's oldest cities blessed with not only a rich economic history but a social and cultural history worthy of many of its New England rivals.

Having its beginnings as a homesteading and farming community, Boston eventually evolved into a center for social and political change. The city has since become the economic and cultural hub of all of New England.

Massachusetts’ founders originated primarily from the Plymouth Bay and Massachusetts Bay colonies. In the early 1600s, a group of religious separatists sailed on the Mayflower seeking a new home in the New World. After reaching Cape Cod, the Pilgrims landed at Provincetown Harbor on November 11, 1620 and on December 16th they dropped anchor at Plymouth, Massachusetts, at a site later landmarked as Plymouth Rock.

A second English settlement, the Massachusetts Bay Colony, was primarily situated around the present-day cities of Salem and Boston. The territory administered by the colony included much of present-day central New England, including portions of the U.S. states of Massachusetts, Maine, New Hampshire, Rhode Island and Connecticut. Territory claimed but never administered by the colonial government extended as far west as the Pacific Ocean.

One of the pioneer settlers instrumental in the founding of Boston, was one of the religious clergy, the Rev. William Blackstone. Blackstone immigrated in 1623 in the Captain Robert Gorges expedition. Arriving three years after the Mayflower, Blackstone was the first white settler of Shawmut, an area that was to become Boston, and he later emigrated to Rhode Island, where he conducted the first Anglican services there. A good friend to the Indians and to Roger Williams, the founder of Providence, Rhode Island, the Rev. Blackstone is considered to be the founding father of the Protestant Episcopal Church in the United States. He married at age 64 and had an only son John.

On September 17, 1630, the head of the Massachusetts Bay Colony, John Winthrop, a Puritan lawyer, decided to make Shawmut a permanent settlement and renamed it Boston, after his hometown in Lincolnshire, England. Winthrop led the first large wave of immigrants who left England to escape religious persecution, and he served as governor for 12 of the colony's first 20 years of existence. As governor, Winthrop spearheaded the signing of the Cambridge Agreement, a key founding document of the city. Puritan ethics provided a framework for much of Boston’s and Massachusetts’ early history.

Center of the American Revolution

Many of the crucial events of the American Revolution—the Boston Massacre, the Boston Tea Party, Paul Revere's "midnight ride,” the battles of Lexington and Concord and Bunker Hill, the Siege of Boston, and many others—occurred in or near Boston. Today, you can walk the Freedom Trail, a historical 2.5-mile-long path that traverses downtown Boston. It includes 16 locations significant to U.S. history and markers of important dates in the Revolution. It winds through spots between Boston Common all the way to the U.S.S. Constitution in Charlestown. Marked by brick, stops along the trail include simple explanatory ground markers, graveyards, notable churches and buildings, and a historic naval frigate. While most of the sites are free or suggest donations, the Old South Meeting House, the Old State House, and the Paul Revere House do charge admission.

After the Revolution, Boston's long seafaring tradition helped to make it one of the world's wealthiest international ports, with rum, fish, salt, and tobacco being particularly important. And it is still a major commercial port today with emphasis on the marine and fisheries industries.

America's first public school had its start in Boston in 1635, one of many firsts that the city would achieve over the years. Over the next 130 years, the city participated in four French and Indian Wars, until the British defeated the French and their native allies in North America. Boston was the largest town in British North America until Philadelphia grew larger in the mid-18th century.

In 1822, the citizens of Boston voted to change the official name from "the Town of Boston" to "the City of Boston,” and on March 4, 1822, the townspeople accepted the charter incorporating the city. At the time, Boston was chartered as a city, the population was about 46,226, while the city’s area only measured about 4.7 square miles.

In the 1820s, Boston's population grew rapidly, and the city's ethnic composition changed dramatically with the first wave of European immigrants. Irish immigrants dominated the first wave of newcomers during this period, especially following the Irish Potato Famine; by 1850, about 35,000 Irish lived in Boston. In the latter half of the 19th century, the city saw increasing numbers of Irish, Germans, Lebanese, Syrians, French Canadians, and Russian and Polish Jews who had settled in the city. By the end of the 19th century, Boston's core neighborhoods had transformed into ethnically distinct enclaves—Italians inhabited the North End, Irish dominated South Boston and Charlestown, and Russian Jews lived in the West End. Irish and Italian immigrants brought with them Roman Catholicism. Currently, Catholics make up Boston's largest religious community. Since the early 20th century, the Irish have played a major role in Boston politics—prominent figures, of course, include the Kennedys, former Speaker Tip O'Neill, and John F. Fitzgerald.

The largest city in New England, the city proper, covers 48 square miles, and in 2014, had an estimated population of 645,966, making it the 24th largest city in the United States. The city is the anchor of a substantially larger metropolitan area called Greater Boston, home to 4.5 million people and the tenth-largest metropolitan area in the country. The Greater Boston region is rich with commuters and the home to 7.6 million people, making it the sixth-largest combined statistical area in the United States.

Boston is often dubbed the “city of neighborhoods” due to its diverse, cultural and ethnic environment. As such, Boston’s Office of Neighborhood Services has officially designated 23 distinct neighborhoods that make up the city. Boston’s modern land area did not exist upon the city’s founding but was created by gradually filling in the tidal areas and lowering Boston’s Trimountain or original three hills. Gravel was brought by train from Needham to fill in the Back Bay.

Downtown Boston contains mostly low-rise (Federal and Greek Revival-styled) masonry buildings, with many high-rises dotting the Financial District, Government Center and South Boston. In the Back Bay you will find the John Hancock Tower and Prudential Center. The South End consists of the largest surviving contiguous Victorian-era neighborhood in the country. Other unique commercial areas include Newberry Street and Copley Square. Another popular attraction is the Public Gardens and the swan boat rides adjacent to Boston Common.

Boston’s sports franchises are legendary in their own right. The Red Sox, which play in the cathedral of baseball in historic Fenway Park, built the year the Titanic sank, won titles in 2004, 2007 and 2013. The Boston Celtics (which have 17 titles and last won in 2008) and the Boston Bruins (which have six Stanley Cups and last won in 2011) are original NBA and NHL franchises that have championship pedigree. And the four-time champion New England Patriots which play in nearby Foxborough just won Super Bowl XLIX against the Seahawks.

The area is home to many fine educational institutions, hospitals, and iconic cultural attractions, including the Boston Symphony and Boston Pops. Millions of people visit Boston annually to take in its historic neighborhoods, attend cultural or sporting events, and conduct business.

Housing runs the gamut from single-family homes to condos and townhomes and triple-decker rowhouses. According to December 2014 statistics from the Greater Boston Association of Realtors, a recovery is in the works. “With a broad pattern of rising prices and stable to improving inventory, the market has shifted from being drastically undersupplied to approaching equilibrium. Price gains are still positive but less robust than last year,” the report says.

If you’re looking for a world-class city with Old World charm and a long-standing cultural and ethnic heritage, Boston, Massachusetts could be the place to hang your hat.