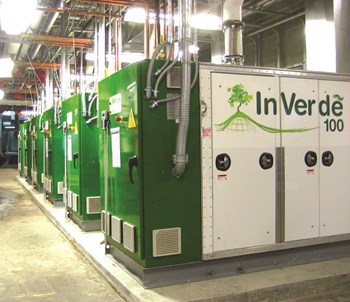 The process of producing energy for metropolitan New England-area co-ops and condos has dramatically evolved in recent years, advancing to the point in which one energy professional has quipped, “The old way of using a traditional energy-producing system is like using a chainsaw to cut butter.”

Specifically, though, what are these new energy-producing technologies? Can they save money, long term and short term, for a condo or HOA? How can they be acquired when it seems, quite literally, as if major commercial energy suppliers are the only option available? Some condominium communities are exploring these questions, and coming up with solutions that are saving them both energy and money.

In any city, most co-ops, condos and HOAs receive energy from a single, major supplier like National Grid. Many property managers and HOAs, however, are taking some of these matters into their own hands—so to speak—through implementing co-generation technologies.

By definition, co-generating buildings produce a portion—sometimes a larger portion; sometimes smaller—of the energy they need to operate, on their own with the appropriate equipment. They rely on major suppliers only for the balance of what they cannot produce. Sometimes, they even sell surplus energy back to the suppliers, making a profit from their efficiency.

In reality, co-generation has existed for decades; it has, though, required time to gain support and visibility. In fact, many people aren’t fully aware the technology exists today. For those who do not, co-generation is the use of natural gas-fueled energy to create electricity. It’s often called combined heat and power (CHP) because it delivers two forms of energy…electricity and hot/chilled water.

In a traditional electric system, water is heated into steam which turns a turbine at an extremely high speed with a magnetic source in order to generate electricity. In these systems, most of the heat is wasted, heading up the smoke stacks or—sometimes—into the river, also increasing environmental concerns. To better understand CHP energy, explains Lewis Kwit, the president of Energy Investment Systems in New York, “In a traditional system, it takes 11,450 BTU to create 1 kW hour of electricity; however, in a co-generation unit, it would require 3,412 BTU’s for the same amount of electricity.” This is due to higher efficiency and lack of wastefulness.

A co-generation unit is smaller; therefore, the technology recaptures the heat, and the energy is used for thermal purposes, like heating water and warming units in the winter season. Because electricity is fed into the building, the process lowers the power bill for each unit while at the same time reducing greenhouse gas emissions, having vast impact on environmental conditions. “It is more efficient than traditional power companies because there is not as much wasted energy,” says Kwit. “The hot water is pumped into the office…not fed out of cooling towers, like with many traditional energy plants.”

“When power comes from off-site, you're only getting about 30 percent of the generated electricity at your plug,” explains Stuart E. Weidie, president and chief executive officer for Blossman Gas, Inc., an energy supplier. “More than 30 percent of the energy is lost in production, and still another 30 percent is lost in transmission over power lines."

Building on the Past

The city of Hartford, Connecticut, is familiar with the CHP concept; it has two district heating and cooling systems that service a large swath of downtown, including the Old State House; the South End system is connected to a co-generation plant. And in the past year, the cities of Boston and Cambridge dedicated a $112 million “Green Steam” project constructed by Veolia that expands and enhances an underground heating and cooling system that has been in place for nearly a century. According to Veolia, a worldwide provider of environmental solutions, the district energy system “integrates combined heat and power (CHP) technology with efficient steam infrastructure,” producing electricity for the electric grid and distributing steam in Boston’s central business district, the biotechnology corridor of Cambridge and the Longwood Medical Area of Boston. The original co-generation plan at Kendall Station in Boston was upgraded with new CHP equipment in 2001—and produced more heat than the existing pipes could handle, so Veolia recently built a second pipeline to capture that excess thermal energy.

“The City of Boston has been making great strides in creating a green city, which is possible through the dedication and help of Boston’s residents, businesses, and institutions,” said Boston Mayor Martin J. Walsh at the Green Steam dedication. “The completion of this project marks an important step forward in attaining our Greenovate Boston goal of reducing Boston’s greenhouse gas emissions 25 percent by 2020 and 80 percent by 2050.”

But while the Boston/Cambridge project is a great step for the city and Veolia, “Only a handful of cities in the U.S. have the unique opportunity to implement this type of solution combining existing district energy piping networks with innovative combined heat and power technology,” said Bill DiCroce, executive vice president and chief operating officer of Veolia North America’s Municipal and Commercial Business. Allison Kelly, director of sales and marketing at Veolia, adds that these CHP systems are ideal for properties that have multiple buildings in close proximity to each other—like medical or college campuses—because they’re more cost-effective than adding co-gen systems to individual buildings. Customers that fit the profile for an energy district can not only reduce their heating budgets, but also reduce their carbon footprints by 30 to 40 percent.

Benjamin Locke, CEO of Tecogen, a national CHP technology manufacturer that installs and maintains high efficiency, ultra-clean combined heat and power products, says buildings that use a lot of hot water are best suited for a CHP system. “For example, an office building, not a lot of people take showers in an office building. But a large residential building, people take showers and do laundry, that’s a great candidate,” he says. Larger hotels, health care facilities, and athletic clubs would also benefit immensely from CHP systems “Everybody needs electricity, but you’re also making hot water because you’re capturing all the heat that’s generating when this engine’s running,” says Locke. Instead of wasting that energy like cars do through the tailpipe, it’s conserved and used in the form of hot water.

Good for Homes, Too

However, residential units are beginning to choose this type of energy source more frequently, as well. One drawback to combined heat and power systems, currently, is a greater upfront cost, posing financial challenges for co-ops and condos. Of course, over time, big savings do accumulate.

A recent feasibility study by Energy Investment Systems—which provides efficient energy services and solutions to New York City and the tri-state area—shows the results of switching from traditional energy systems to CHP in a 200-unit condo. “At a saving of 5 to 7 cents per hour for this type of condo or co-op building,” Kwit explains, “it will take approximately three years to pay back the initial investment. This translates into $36,390 dollars in savings per year, not including savings on heating water and the like, which would actually add another $45,000 in savings per year by using the waste heat from the combined heat and power unit.”

It order to host a combined heat and power energy system, a building requires quite simply a natural gas supply, a chimney (or some exhaust source for the heat production) and the unit itself.

How much does co-generation really save shareholders and unit owners in terms of monthly maintenance costs?

In a study by Rutgers University, the cost and benefit analysis shows 75 percent overall efficiency of combined heat and power, and 51 percent of traditional; these statistical findings have the strong potential to directly and significantly impact condo and co-op monetary savings. According to Tecogen.com, “this same efficiency gain with combined heat and power is what helps an end-user cut his utility bills significantly…as much as 50 percent.”

Today, more and more buildings are using the technology, and the numbers continue to grow each year. Co-generation is here to stay, as it seems. Specifically, according to Green Crown Energy, the United States aims to have “20 percent energy efficiency by co-generation by 2030.”

Wesley Strickland is a freelance writer based in Manhattan and a frequent contributor to New England Condominium. Associate editor Pat Gale contributed to this article.