Do not show again [X]
By Lisa Iannucci   2013 December Security 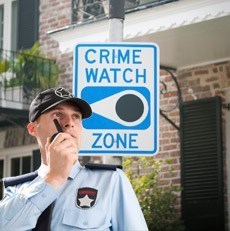 One gated community in Sanford, Florida was struggling with security issues. In a one-year time period, from January 1, 2011 through February 26, 2012, police were called to The Retreat at Twin Lakes more than 400 times. Reports show that crimes during this time period included eight burglaries, nine thefts, one shooting and dozens of reports of attempted break-ins.

In September 2011, the Twin Lakes residents wanted to do something about it, so they held an organizational meeting to create a neighborhood watch program. Resident George Zimmerman was selected by neighbors as the program's coordinator.

Last year, Zimmerman began his rounds, but on February 26, he called the Sanford police non-emergency number to report what he considered to be a suspicious person on the property. Zimmerman observed Trayvon Martin, a 17-year-old African American boy, returning to the Twin Lakes housing community after having walked to a nearby convenience store. At the time, Zimmerman was driving through the neighborhood on a personal errand.

While on the phone with police, Zimmerman followed and later fatally shot Martin, who was unarmed. The case—and subsequent acquittal of Zimmerman on murder charges—electrified the nation and sparked heated discussions of a number of hot-button issues, including the legitimacy and appropriateness of neighborhood watch programs involving untrained or minimally-trained civilians.

Residents want to feel safe and secure in their homes, but whose responsibility is it to ensure the security of the property? “I happen to be in favor of community and watching out for one another, but as a lawyer, I’m always a little concerned about neighborhood watches because of their level of training and experience,” says Lisa Anderson, an attorney with the law firm of Bender, Anderson & Barba, P.C. in Hamden, Connecticut, who says she hasn’t seen too many formal neighborhood watches in Connecticut. “The board needs a liaison to watch what the watch is doing. It needs to be formed by the board and they need to have the authority to remove it if it’s not going well.”