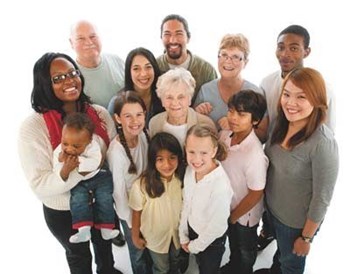 Two important shifts in U.S. demographics are playing a role in planning the  future of condominium communities. First, the nation’s population, including that of New England, is becoming more racially and  ethnically diverse. Second, people are living longer, and many of those  individuals plan to stay in their homes as long as possible.

While condo association boards and management teams already have plenty on their  minds, they may find it useful to think strategically about the future  satisfaction of a broader array of residents. Actions and policies that support  cultural, racial, and age diversity better position the association to  communicate with and retain homeowners.

From ‘Minority’ to ‘Majority’

Over the next 20 years, the complexion of U.S. cities and counties is expected  to change, in some cases dramatically. Today, four states (Hawaii, New Mexico,  California, and Texas) have already seen their minority populations exceed 50  percent (no longer a “minority”) according to U.S. Census data. New England states such as Massachusetts have  seen their minority populations increase, a trend that is likely to continue  because of falling birthrates among whites, according to Census-data analysts.

In Massachusetts, out of a population of 6,593,587, whites make up 85.9 percent,  Latinos 8.8 percent, blacks 7.1 percent, and those who describe themselves as  foreign-born 12.2 percent, according to Census data. The data also shows that  18.7 percent of Massachusetts’ residents reported speaking a language other than English at home.

In bigger Massachusetts cities, such as Boston, Worcester, and Springfield, the  increase in the number of Latinos and Asians over the past decade has been  particularly marked. While the economic downturn disproportionately affected  homeownership among minorities in poorer communities, according to David J.  Levy of Sterling Services in Holliston, Massachusetts, evidence suggests that,  in affluent communities, homeownership by Southeast Asian and other Asian  groups has held steady or increased.

The National Aging in Place Council, interpreting census data, says that by the  year 2030, 20 percent of all U.S. residents will be over age 65. “At that time, 32 states will have populations that look like Florida today,” the NAIPC says on its website. And experts are predicting that the number of  very old residents (beyond age 85) will hit 30 million in 2050, with 2.5  million people living to be older than 100.

What do these demographic changes mean for condominium complexes? A more  racially and ethnically diverse constituency may require changes in how  management communicates the rules, treats issues such as noise, and trains its  staff members in cultural sensitivity. An aging population requires certain  services that may include building ramps, installing grab bars in bathrooms,  and re-carpeting areas that serve wheelchairs.

But more than just creating a safer, more welcoming environment for minority or  older residents, board members and management company employees will want to  examine their own attitudes and assumptions.

“Condos are a reflection of our social picture,” says Jasmine Martirossian, a board strategist whose doctoral dissertation  focused on group dynamics and board governance issues. “Stereotypes are a shorthand way for our brain to categorize things quickly,” she says. “We tend to pigeonhole the elderly and ethnic groups. But when labels are created  things deteriorate from there.”

Martirossian describes a social science experiment in which employers and job  candidates actually overlooked racial characteristics to align themselves with  people who agreed with them, rather than with people who disagreed but were of  the same ethnicity. “Thinking the same” is a powerful connector, Martirossian says, but people have to talk with one  another to get to that point of common ground.

“Conflicts arise when people don’t know what they are expected to do,” says Martirossian. “It’s already a problem that English-speaking residents don’t read the condo rules. Imagine if you don’t read English at all.”

In higher-end condo complexes, residents usually hold professional jobs and  already are fluent in English. But at the lower end, residents are often  struggling to hold down several jobs to make ends meet, and they may lack  reading and writing skills in their own language.

The decision about whether to put up signs or send out notices in multiple  languages can be fraught with controversy. In one camp are people who say  immigrants should learn English, and in the other are those who want rules and  bylaws to be clearly understood. The extra work and cost involved in  multilingual signage and in translating notices is probably prohibitive for any  complex except one with very high numbers of non-English speakers, says  Martirossian.

A better way to reach those who don’t speak English is to involve their children or grandchildren, who usually do  speak English, Martirossian says. Creating a neighborly environment through  people “breaking bread together” also reaps dividends in cooperation and cross-cultural communication.  Encouraging a variety of people to volunteer for committees and on the board  also will help carry other viewpoints to decision makers.

Levy’s management company, Sterling Services, has several staff members, including  one portfolio manager, who speak Spanish and Portuguese. They help serve the 95  percent of his residents who moved to Metrowest Boston from Brazil and other  Latin American countries. Sterling Services also sponsors summer socials in  which Latin foods share a table with hamburgers and hot dogs. Not only do  residents appreciate the effort at making them feel comfortable, Levy says, but  also these moves have given his company an edge on a practical and marketing  level.

Unfortunately, culture can also be used as an excuse for not following rules.  Levy tells of a situation in which a few individuals hanging out on a doorstep  were playing music loudly enough to disturb other residents. When they were  reminded of the noise rules, they argued that the music was part of their  culture and that the rule was unfair. The tenants were encouraged to attend the  regularly scheduled meetings on rules and rule enforcement, so their views  could be aired.

“When people feel something is being forced on them, they reject it,” Martirossian says.

Any discussion of race and ethnicity brings up powerful emotional responses. But  aging, and the need to plan for an aging population, is a topic that sneaks up  on people. “It still comes as a surprise,” Martirossian says. Americans tend to compartmentalize and institutionalize the  elderly, while people in other countries shake their heads and say, “Why would you want to leave your home when you’re old?” she says.

American attitudes, led by the baby boomers, have already started to change. In  an AARP poll conducted in November 2010, nearly 75 percent of the respondents  (age 45 and older) said they hoped to stay in their homes as they age.

As more residents choose to “age in place”—rather than moving into retirement communities or assisted livin — changes will likely be needed to help keep them safe.

But there’s no getting around the fact that seniors experience a greater number of health  problems. The NAIPC reports that more than two-thirds of all older people who  need help with everyday tasks live at home, including more than 70 percent of  those with Alzheimer’s disease. Chronic health conditions such as diabetes and arthritis, events such  as falls or strokes, along with medications used to treat other ailments, can  greatly affect mobility, the NAIPC says.

The most important step, say experts, is to reduce the risk of falling inside  and outside the home. Falls can lead to a host of other difficulties that  affect seniors’ ability to remain in their homes. Stairs, steps, and entryways bear special  attention.

Fortunately, improvements such as ramps and wider doorways can improve life for  other residents as well. These amenities address a spectrum of mobility needs:  older residents with walkers, people in wheelchairs, parents with strollers,  residents with shopping carts, and even delivery people and moving companies. A  condo complex that complies with ADA (Americans with Disabilities Act)  regulations is already providing accessibility for its seniors. This notion of  infrastructure that works for people of all ages and stages of life is called  Universal Design.

Retrofitting New England’s older housing stock along the lines of Universal Design, or ADA compliance, is  an expensive proposition.

Still, small changes applied gradually can help condo associations make headway.  For example, when carpet needs replacing, choosing a low-pile option can make  it easier for people with walkers and wheelchairs to navigate, says Amy Levner,  manager of education and outreach for the AARP. She also urges condo complexes  to consider redundant safety features. For people with hearing issues, having a  phone or fire alarm that flashes as well as rings could be vital.

She suggests that communities provide a space for seniors to meet and form a  network that can serve both social and practical needs. One example of such a  network is the Beacon Hill Village in Boston, whose members banded together to  offer cooperative services such as garden maintenance, house cleaning, meal  delivery, transportation to doctors’ appointments, and pet sitting. The Village concept has gathered steam and  spread to other cities.

By discovering the humanity in others, sharing a pizza or coffee, getting to  know them “instead of delving into ‘otherness,’” says Martirossian, “we create a situation conducive to neighborliness and goodwill.”

April Austin is a freelance writer and a frequent contributor to New England  Condominium.