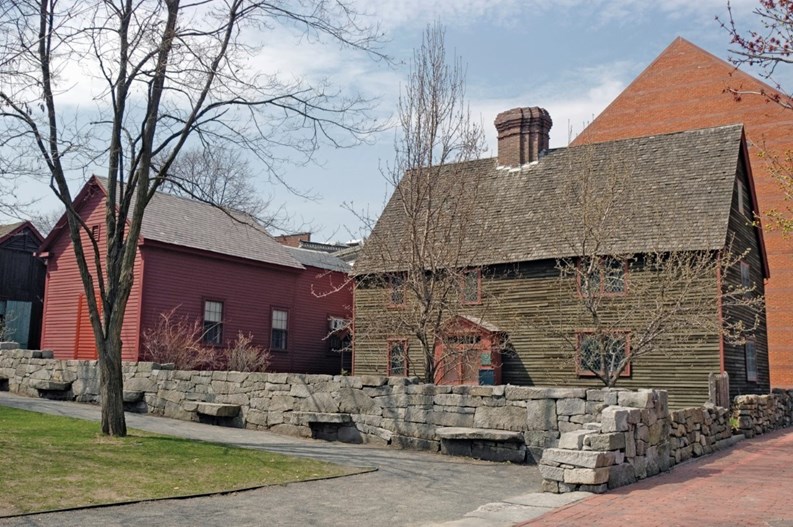 Use Salem, Massachusetts, in a word-association assessment, and you’d undoubtedly get a word referencing the infamous Witch Trials of 1692. Less famous but even more formative is the rich maritime history that contributed to the buildings and waterfront on which Salem is perched. Residents are sometimes divided over what the true character of Salem really is, or should be. What is the source of its identity? How does it thrive financially? What should be its public face? How seriously should the city take itself? But maybe it is the questions and the contrasts which give this city its distinct individuality.

Salem’s sense of its own history is perhaps greater than that of many in New England. You don’t live through a tragedy during formative years, either as a person or as a society, without being in some way affected by it. The City of Salem’s approach to the blot of the witch trials on its story has been and continues to be varied.

On the one hand, there is the general acknowledgment that the famous trials, instigated by a gaggle of mischief-making teenaged girls, were an event that never should have happened. One way to make amends for this is to be extra-inclusive. Places of worship include, ironically, a Wiccan temple, a Hebrew temple and assorted churches. Furthermore, as if to prove its desire for diversity, recent statistics claim thatSalem’s public school system contains children representing 20 different language groups.

At the same time, the history doesn’t exactly hurt tourism. Salem boasts many witch-related attractions. Among these are the Salem Witch Museum, the Wax Museum of Witches and Seafarers, the Witch History Museum, the Witch Dungeon and Cry Innocent. These, of course, take a more or less serious view of the trials themselves and not all of them focus primarily on those specific events. Apart from the Witch Museums, other attractions with a macabre slant abound. Witch-based tourism started at least by the first half of the last century when a merchant named Daniel Low sold souvenir spoons sporting witches. The idea of marketing the witch phenomenon grew a bit in the 1970s and truly took off in the 1990s. Some residents wish the city would come into its ownas an upscale cultural center. They argue that the tourism cheapens this. But they needn’t worry, because Salem is home to plenty of class.

In the latter part of the 1700s, Salem became a powerful seaport, the richest city per capita in the country at the time, and the sixth largest. America’s first millionaires walked its streets and bequeathed it mansions and museums. The sea captains themselves, for example, founded the renowned Peabody-Essex Museum – the oldest continually running museum in the United States, which is renowned for its collection of Asian art. “Continually running” is not just a passive euphemism, either; in 2003, the museum moved an entire 200-year-old Chinesehouse into its collection. The Salem Maritime National Historic Site is the oldest such site in the country as well. Even the Great Salem Fire of 1914 somehow managed to bypass the most historic district, leaving Salem with a most impressive and extensive collection of Federalist architecture.

The buildings of the past are not just quaint museum pieces, however. Tax assessor Deborah Jackson tells the story of how the condominium industry took off in downtown Salem over the last ten years. Currently, out of 11,257 residential parcels in total, 3,909, or 35%, are condominiums. Since 2000, the number of condos has increased by about 1,500, and most of those are downtown. Prior to 2002, Jackson says, no one lived downtown. “You could go down the main street early in the morning and not see anybody.” But in 2002, an enterprising resident developed a condoout of an old office building. Once those units sold, people started flocking into the downtown area of Salem.

Diane and Richard Pabich, co-owners of the Salem Inn, were the visionaries behind this initial restructuring of downtown Salem. That first condo development, now named Townhouse Square, was at first, as Diane Pabich says, “a mess – the ceiling was on the floor and there were three trees growing out of the back.” Originally intending to remodel it into rental properties, the couple eventually decided on condominiums. Townhouse Square contains nine residential condos and four retail spaces. Naysayers claimed the units would never sell and complained that there wasn’t enough parking. However, all the units sold within the first year and the Pabiches were then encouraged to do a second project –“The Distillery,” formerly a rum distillery and then a nightclub before being made into ten residential and five retail condos.

“I wish we could find buildings downtown to still do that,” Pabich saysruefully when asked if there are any more downtown projects in the works for them. They are currently working on a three-family unit out of the city center, but she says they do prefer larger projects. Their success inspired other developers and now most of the rest of the downtown sector has been bought up for more housing and retail and restaurants.

Jackson cites other successful condominium ventures ranging in size from smaller two- to three-family propertiesin renovated Federalist buildings, to the “Laundry Building” (properly named the Derby Loft), of 54 residential and five commercial units. The Derby Loft has, in the past, had units sell for upwards of $400,000 (top-floor water-views have sold for $600,000), but now the starting rate is generally around $299,000.

Tom Daniel, Salem’s economic development manager, admits that, as with most cities, Salem has been touched by the economic downturn, but maintains that there is still “a real strong absorption of condos downtown.” He cites a recently-completed development of twelve units in refurbished houses, all of which have sold. He also comments that a large apartment complex next to the commuter rail station, of approximately 265 units, recently had only two apartments still available.

With evidence like that, it would seem that people are still finding Salema more than desirable place to live. And it’s no wonder. Daniel says that in spite of the nation’s economy, the downtown still bustles. New restaurants have started within the last year, with a few more slated still to come in. Given that restauranteuring is a risky venture, Daniel observes, people must be feeling pretty confident about the future of Salem.

“There’s a lot of richness in this community,” he says, citing in particular the maritime-based history. There has also assuredly been much private- and public-sector land development. Salem Main Streets is an organization in the city whose goal is “the revitalization of downtown Salem as a vibrant, year-round, retail, dining and cultural destination through business recruitment, retention and the promotion of downtown Salem.” With this in mind, they schedule community events throughout the year, from the month-long Halloween festivities in October, to Salem’s So Sweet (a chocolate and ice-sculpture festival) in February, from the successful Farmer’s Market to the summer Ice Scream Bowl.

Salem Partnership, another group linked to Salem Main Streets, is involved in implementing three major city projects: the renovation of the Courts Complex (scheduled for completion in 2011), the Salem Harbor Plan, and the Creative Economy Initiative in conjunction with the Enterprise Center at Salem State College.

Salem is the judicial center for Essex County, and Daniel asserts that the $106 million refurbishment of the Courts Complex – including the Superior, District, Housing and Juvenile Courts – will solidify its position in the area for at least the next 100 years. This aspect of Salem alone keeps the city a viable center for living and working. In fact, the entity which hires the second most number of Salem residents is the city of Salem itself, followed by Salem State College, and surpassed by the North Shore Medical Center.

Salem is also a viable spot for commuters. Plans to re-engage the waterfront have included the institution of a ferry service, begun in 2006, bringing people back and forth across the water to Boston. A Harbor Walk has been begun and is still underway, and the wharf is being expanded so that more cruise ships can dock there, and so that there will be more room for private docks. One of the busiest commuter rail stops is Salem’s, as well. In 2009, Massachusetts Governor Deval Patrick visited the city and committed to build an actual train station, with an indoor waiting area and some amenities, as well as a structured parking garage in place of the current service parking lot. Though no major highways run directly throughSalem, Route 1A goes through the downtown and connects travelers to I-95 and Routes 1 and 128.

City policies, Daniel claims, have guided the downtown to have residential development that has really succeeded. The city is moving forward with plans and policies that have been in place already, and they are continuing the momentum. Salem is a very “layered community in terms of the assets it has,” he says. With the water, the accessibility, the history, the solid housing options and the many dining, retail and tourist options, Salem can be precisely what its residents want it to be.

Jennifer Grosser is a freelance author and a frequent contributor to New England Condominium magazine.