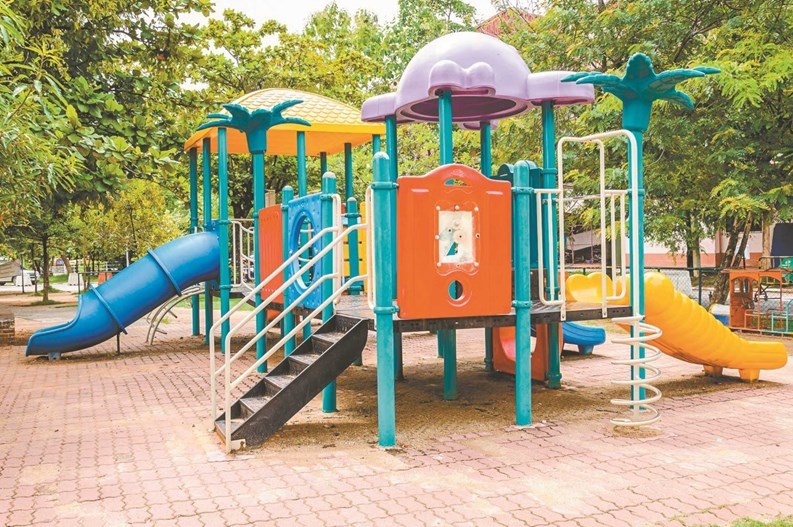 For condominium communities with families, an outdoor area that includes a playground with swings, slides and other features can be a major amenity. Many parents have fond memories of their own childhoods, with hours spent testing physical prowess and burning up energy with peers on a neighborhood or schoolyard “jungle gym.”

For condominium communities, the popularity of on-site playground equipment may vary considerably from one association to another, however, regardless of the presence or number of children. Ideas about the design and manufacture of play sets keep changing, along with attitudes of managers, board members and trends in the population of community residents. All these factors will determine how long a set of play equipment may remain as a prominent feature on any given community’s grounds.

Today’s play equipment can be designed to visually enhance open space, with elements that look sculptural, architectural—or whimsical. Dedicated play centers serve as a social magnet and provide a sense of neighborhood. Current designs include theme-inspired playsets, such as a pirate ship or firehouse, which encourage interactive play.

The firm M.E. O’Brien & Sons of Medfield, Massachusetts specializes in landscape features and playset installations. Company president Megan O’Brien Taylor describes the latest trend in playgrounds as, “sensory play that engages all the senses. For instance, there is a line of products from [Colorado-based] Freenotes Harmony Park that involves musical instruments such as xylophones, chimes, bells and percussion devices,” as permanently installed fixtures. These can be designed as attractive sculptures and invite individuals or groups of any age to experiment with notes and rhythms.

“Educators are promoting sensory-rich experiences with playground components,” she continues. “This approach is especially effective for kids who have learning or developmental challenges, such as ADHD, Asperger’s or some types of autism. These children respond well to features that move and spin… It helps them get centered. We are using features with ropes that are very popular, designed as webs or nets that move and let kids interact.”

O’Brien also points out the advantages of some newer materials, such as glass fiber reinforced concrete (GFRC), that can be molded into realistic-looking elements such as wood or stone, without the maintenance needed for natural materials. Fabricated as posts, stairs, or log tunnel slides with textured bark and grain surface, it truly appears to be wood.

Other playground sets offer updated versions of traditional formats and materials. One example is manufactured by Rainbow Play Systems, Inc. A distributor for the brand in Massachusetts, New Hampshire and Maine, Mark Montville points out that “Rainbow is the firm that came up with the ‘Castle’ style, using redwood. The company was started nearly 30 years ago by founder Gary Foster in Minnesota. The company can do special, customized designs, and know how to meet all federal and state codes.

“The Castle design can be installed on uneven ground,” he adds. “It can accommodate a ground-level height difference of three feet from the front to the back of the unit. There’s no need to do extra site work [or to] level the ground… there are no footings to dig, since all the designs are freestanding, and not anchored. The weight and geometry of the finished structure holds it firmly to the ground. All that saves a lot of money.”

He explains that over the years, different materials and multiple designs and combinations have been tested and used. Although other options on the market might include all metal, all plastic, or some combination, the Rainbow system sticks to real wood for the basic frame and main structures. “All the wood we use has been routed and sanded,” Montville says, “and it can support almost unlimited weight. Features such as slides are made of a high grade vinyl. The company has worked with different plastics manufacturers to produce a customized material with a high UV protectant. To maintain kid-safe surfaces, swings use vinyl-coated chains, carriage bolts are capped and lag bolts are recessed, so there’s nothing sticking out.”

He outlines a wide variety of add-ons; everything from ladders at different inclines, tube slides or a rock-climbing wall. “The Castle-style features a tire swing, hung horizontally from three [coated] chains,” Montville says, “and the tires are recycled… from NASCAR race cars. Each comes with a label that describes its history.” Rainbow, he says, was “a ‘green’ company before that term became popular.”

He adds that a finished unit can have a footprint as small as 15’ x 13’ with a price starting at around $2,200 installed. “Or, you could have a play structure the size of a house, that could cost $65,000. There’s almost no limit… the Mall of America had one that filled a space four stories high.” he states.

One of the most important aspects of a play structure is the ground cover and impact zones under each feature. Currently popular surface products that are ADA-compliant and safe include engineered wood fiber (wood chips), loose-fill shredded rubber, rubber tiles, or rubber poured-in-place, O’Brien notes.

Considering the wide range of materials and choices, Montville describes a process he would recommend. “We’d put down commercial-grade landscaping fabric, stapled down, then edge it with five-inch high rubber curbing fixed with two-foot spikes in the ground—these are capped to prevent access. This area is then filled with rubber mulch made from sidewalls of tires. It comes in a choice of colors, treated with food-grade dye. We often use colors such as terracotta, redwood or brown, since it matches the swing set, but we installed one in blue mulch once, and it looked the whole play structure was floating on water.”

Montville would not rule out a grass surface, if an existing lawn can be maintained. Playground chips, he explains, are wood chips that are tumbled for a smooth, rounded surface. “We don’t recommend regular bark mulch because it will compress too much. Sand is sometimes used, but that can invite sand fleas… and cats. We also encourage the use of rubber pads at impact points or fall zones.”

Is the Risk a Reality?

As much as parents, educators and other caregivers may advocate for creative play equipment that’s close to wherever children live, the managers, lawyers and insurance professionals who service residential communities are looking out for potential hazards.

Glenn Montgomery is the owner of Brownstone Insurance of Norwell, Massachusetts, a firm with a concentration of community association clients. He observes that “swing sets… can certainly add liability. Playground equipment is an attractive hazard for children, especially if it’s out in the open, with no fences… no signage. It’s a draw even for kids who don’t live in the [condominium] community.” He explains that the liability is similar to that of a swimming pool, “which is considered an ‘absolute’ liability, because it attracts attention… it’s an inherent draw… and a playground even more so, because it’s drawing children, who don’t have the same prudence that an adult would. So, you can still have liability even after you’ve done everything you can to not be negligent.

“What an insurance company does [with an attractive hazard],” he continues, “is send out loss-control engineers to make an assessment. If it’s a pool, they will outline a lot of recommendations [to mitigate risk]. If it’s a playground, the association board might find their recommendations to be onerous, if they’re suggesting fencing, locked gates, some kind of supervision… For most clients, I would probably recommend, at the least, some signage with a defined set of rules and hours of operation. Also, the features should be inspected for structural integrity and safe [ground cover] surfaces.”

He points out that “an attractive nuisance on your property is an absolute liability and can make you less attractive to insurance providers. Plus, playground equipment is a capital investment that’s subject to elements like harsh weather and vandalism. These play features are generally not covered in an association’s policy unless it’s specified as an appurtenance.”

Another issue that pops up with an age-focused or specialized amenity is the question of “who’s going to use it,” Montgomery notes. “I had a building with four units on four floors, and the elevator needed replacement. Well, the first floor homeowner didn’t want to pay a $25,000 assessment for something he’d never use. A unit owner with no kids could raise the same argument about a proposed playground installation. But the power goes with the majority,” he states, in a condo community as in a democracy. “If three-fourths of residents have kids and want a playground, the minority loses out.”

It’s All About Demand

At Foxfire Management in Concord, New Hmpshire, Ken Sheppard serves as vice president of residential services. “We manage condo properties from Nashua to the White Mountains,” he states, “and I see a lot of the properties built most recently have focused on adult amenities such as pools and clubhouses. Among our own clients, we have a couple of communities that have ‘tot lots’ designed for toddlers, with small-scale swings and play features. In older properties, from the ‘70s and ‘80s, they did tend to have playgrounds, but I’ve seen associations go and remove them because they’ve been caught in that pickle where there have been injuries… or they’ve simply heard [about incidents]” and developed a negative perception.

Misconception about playgrounds may be unfounded, and misdirected. “On the other hand,” Sheppard reports, “I’ve seen more adults get injured in pools. At one property, a person dove into the shallow end, broke his neck and was paralyzed. He sued the association and wound up with an out-of-court settlement. He even continued to live there. This occurred even though signs at the pool emphatically stated ‘no diving’ and the water depth was clearly indicated.

“In general,” he continues, “I don’t see our clients pushing for playgrounds. Established properties are not going out and building swing sets. Instead, some communities have been putting in dog trails and walking paths around the perimeter of their property. The bigger trend now is over-55, adult communities.”

Sheppard admits that the population currently buying condos in this region may not be families with school-age children, but rather older retirees and empty-nesters, along with first-time buyers just starting their families—hence the trend toward tot lots. And even the lifestyles of children have changed, with their free time tightly programmed into sports and organized activities. Even computer games lead to less time spent simply playing outside.

The parents of a previous generation may have demanded more child-focused amenities from their condo associations. Today’s parents may be too busy driving their children around to notice the absence of a playground outside their door. But things can change. Warnings about today’s children lacking exercise may drive a future trend for more swing sets and the resurgence of play equipment installations. If so, manufacturers will certainly be there, always offering new designs that invite interaction and spark young imaginations.

Marie N. Auger is a freelance writer and a frequent contributor to New England Condominium.