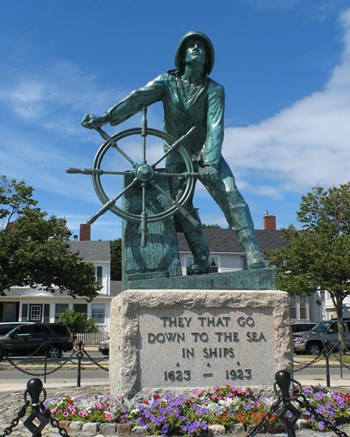 The fish you ate for dinner was likely pulled from the icy waters off  Gloucester, Massachusetts, before it was processed in a packing plant in the  picturesque Cape Ann community.

Fishing has been central to Gloucester’s identity since its port was founded in 1623, giving the city bragging rights  as America’s oldest fishing port.

Gloucester’s busy harbor is home to scallop and lobster boats, ground fish and mid-water  herring trawlers, gillnetters and other commercial craft, all supporting the  town’s key role in New England’s thriving fishing industry. Gorton’s of Gloucester, one of the largest processors, is a well-known national brand

But Gloucester is famous for more than just fish. It’s a vacation destination, too, with pristine beaches, picture-perfect sunsets, a  thriving arts community and respected professional theater. It has a busy  retail district, pretty villages, world-class restaurants and hardworking  residents who look out for neighbors and welcome visitors.

“Gloucester has much to offer—a suburban, seaside community made up of little fishing villages and a busy  downtown with a low crime rate. And it’s an hour and nine minutes into Boston by commuter rail,” said realtor Michele Allison-Elwell of RE/Max Advantage Real Estate.

Gloucester’s always been a fine place to live, says local historian Barbara Erkkila, who  grew up there.

“Growing up here in the 1920s, it was a peaceful place, slow-paced. And it’s still that way,” says the 92-year-old. A long-time reporter for the Gloucester Daily Times, she’s written books on Gloucester’s schooner fishermen and its quarry industry.

Gloucester covers 35 square miles and shares Cape Ann with neighboring Rockport.  It consists of an urban core on the north side of the harbor, surrounded by the  outlying neighborhoods of Annisquam, Bay View, Lanesville, Folly Cove,  Magnolia, Riverdale, East Gloucester and West Gloucester.

Current U.S. Census figures list its population at 30,530 people, with 99  percent of its residents Caucasian and large Italian, Portuguese and  Scandinavian influences.

Down to the sea in ships

An expedition of settlers arrived from Dorchester, England in 1623, establishing  the first settlement in what became known as the Massachusetts Bay Colony. Gloucester pre-dates Salem  by three years and Boston by seven. The town was formally incorporated in 1642.

Early settlers earned their way by farming and logging. Fishing at first was close to shore. But by the mid-18th century, Gloucester  fishermen commanded the off-shore Great Banks and brought in massive hauls.

But many died at sea, too. In its 360-year history, Gloucester has lost over  10,000 men to the Atlantic Ocean. Crewmates on the Andrea Gale, immortalized in Sebastian Junger’s 1997 book The Perfect Stormand subsequent 2000 film with George Clooney and Mark Wahlberg, are the most  famous in recent history.

Gloucester memorializes those lost at sea in a mural in City Hall and at the  iconic landmark statue, titled “Man at the Wheel,” looking out to sea in a harborside park. The annual St. Peter’s Festival includes the Blessing of the Fleet.

Gloucester had a flourishing granite industry, too, which Erkkila chronicled in  her 1981 book Hammers on Stone.

“It was an important part of Gloucester’s history and attracted a lot of Finnish people here, including my late husband’s family,” she said.

Gloucester’s scenic beauty and active fishing industry have attracted and inspired painters  since the early 19th century. Native born Fitz Henry Lane (1804-1865) was the  city’s first painter of note. His home still exists on the waterfront and the local  Cape Ann Historical Museum holds a large collection of his paintings and  drawings.

Edward Hopper, Winslow Homer, William Morris Hunt and Childe Hassam are other  notable artists who have captured Gloucester scenes in their work.

“They’re attracted to Gloucester because of our fabulous light and beautiful views,” says Allison-Elwell.

Gloucester is also the setting for Rudyard Kipling’s 1897 story Captains Courageous, which was made into a 1937 movie starring  Spencer Tracy.

Other movies set here besides The Perfect Storm include Mermaids, Author! Author! and The Good Son.

Housing in Gloucester runs the gamut from comfortable one-family homes to  multi-million dollar seaside mansions with spectacular ocean views.  Condominiums are important to the mix.

“People want to come here for weekends and vacations and can’t afford the prices, so they go for a condo. I sell more condos than  single-family homes,” says Allison-Elwell.

Prices range from a $59,000 one-bedroom condo in the Heights section to a $1.3  million lovingly restored beauty in an old seaside home, complete with modern  amenities like Brazilian wood and vintage touches like a 1900s fireplace and  pocket doors.

Erkkila, new to condo living there, has a two-bedroom unit in the converted  LePage glue factory where she worked as a teenager. She purchased it in 2010  for $164,000.

“It’s wonderful—all new and a great view facing Banjo Pond, where I skated as a girl. I couldn’t be happier,” she says.

Others who have happily called Gloucester home include actress-comedian Whoopi  Goldberg and pop music star Billy Joel, who had summer retreats there and  mingled with locals.

“It’s a wonderful place to live, a nice melting pot of people. I love being close to  the ever-changing ocean,” says Allison-Elwell. “There’s no place like Gloucester and Cape Ann.”

Nancye Tuttle is a freelance writer in Massachusetts and a frequent contributor  to New England Condominium.