Unfortunately, what was fun for us at the time was also pretty dangerous. Children often fell off the teeter-totters, slides and monkey bars onto rock-hard asphalt or concrete surfaces, jacket strings got entangled on slides and merry-go-rounds causing serious injuries (and worse), children regularly got their heads stuck between poles and bars, and rough metal edges and surfaces led to many scrapes and burns.

As a result of all this carnage and mayhem, in 1981 the Consumer Product Safety Commission (CPSC) published its Handbook for Public Playground Safety, which was designed to provide guidelines for efforts aimed at making playgrounds safer. The handbook was definitely a step in the right direction, according to Tom Norquist of ASTM International, a voluntary standards development organization for technical standards. But, “the guidelines failed to include adequate technical requirements neededfor a testable standard; subsequently, inconsistent interpretations of the guidelines occurred,” he says.

According to Norquist, a new approach to playground safety was put into place in order to avoid further misinterpretations and to include requirements set forth by the Americans with Disabilities Act (ADA). As a result, the ASTM and the International Play Equipment Manufacturers Association(IPEMA) have worked together over the years to constantly improve and monitor these standards.

Since then, the new standards—coupled with stiff competition among playground manufacturers—have led to the creation of colorful, interactive, and even themed play structures that are not just safer than previous equipment, but provide a ton of fun for parents and children alike.

If your condominium is lacking a great playground, or if the equipment you have is outdated or beginning to show its age, investing in a new play area is not only good for the kids, it may be a boon for the community and the association’s bottom line. 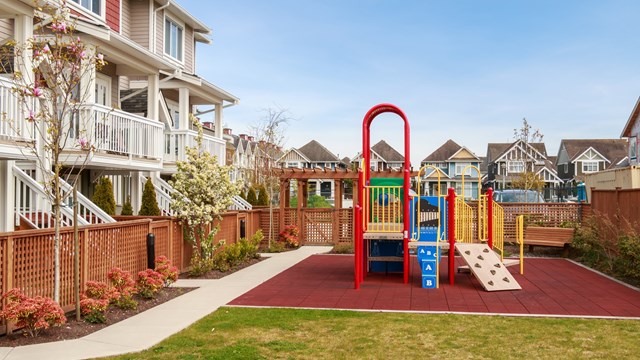