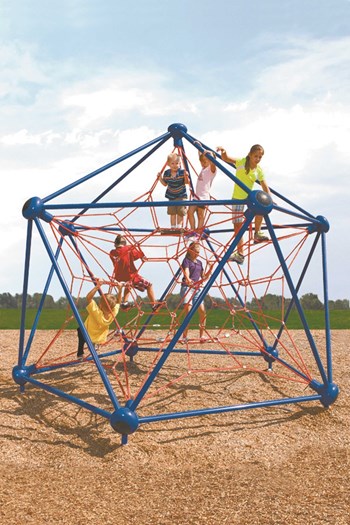 Back in the day when we were little kids, playgrounds largely consisted of  swing-sets, teeter-totters, some monkey bars, and maybe a metal slide or two,  along with the requisite basketball hoops and tetherball set-up.

Since then, playground equipment has come a very long way—gone are the colorless pieces of welded metal set up in merciless black asphalt.  Kids today get to play on all kinds of cool, interactive equipment, and if they  happen to take a spill, chances are their fall will be broken by several inches  of industrial-grade foam padding instead of concrete or pea-gravel.

Playground equipment began its metamorphosis from plain metal and asphalt to the  more colorful, user-friendly options you see on the market today in the 1980s.

“Playground equipment began to shift away from non-powder coated, galvanized  metal and wood structures in the early 1980s,’ says Meghan O’Brien Taylor, CPSI, president of the Medfield, Massachusetts-based company O’Brien & Sons Inc., a supplier of outdoor recreation equipment in New England. “While many wood structures remained, there was a definitive trend toward  powder-coated (factory applied paint) posts and components (climbers, monkey  bars) and rotomolded slides. The biggest change came during the continuous play  movement in 1981 where you had platforms at different levels with climbers,  bridges and slides all interconnecting rather than a freestanding slide, a  geodesic dome, a monkey bar all in different areas of the playground.  Deliberately, these components were part of one structure thus causing a big  movement toward the modern playground.”

Industry experts say that the advances in materials and technology in the 1980s  and 1990s led to a huge expansion in opportunities for commercial playground  equipment.

“I’ve been in this business over 20 years and I saw the shift in playground  equipment begin to start in the 1980s,” says Doug Knotts, president of Premier Park & Play in Newton, Massachusetts. “I think it was a consumer interest and capabilities of manufacturers to create  new products.”

A major change in playground equipment occurred in 1981 when, numerous  playground injuries that occurred when children fell off of teeter-totters,  slides and monkey bars, led the consumer Product Safety Commission (CPSC) to  publish the first Handbook for Public Playground Safety, which was designed to  provide guidelines for making playgrounds safer.

In 2008, the CPSC made several significant revisions to the 1981 handbook. Age  ranges were expanded to include children as young as six months, guidelines for  track rides and log rolls were added, the critical height table revised and  suggestions for surfacing over asphalt were added.

Another modification in playground construction occurred as a result of changes  to the American Disabilities Act (ADA) and the ability for special needs  children to be able to play alongside other children.

“The original ADA standards went into effect in 1992 and were recently revised  after 20 years,” says Kenneth Otten, a nationally-recognized accessibility and ADA expert. “There were no specific requirements for playground equipment in the original  version of the ADA Accessibility Guidelines for buildings and facilities. The  only requirement was that an accessible route had to be provided to the  boundary of the play area.”

Otten says that after much study, the U. S. Access Board incorporated new  requirements for playground surfaces and equipment which became mandatory on  March 15, 2012.

“Homeowners associations should be able to rely on the manufacturer's statement  that their equipment complies with the new ADA Standards,” says Otten. “However, it is best practice to consult with a local design professional and an  ADA compliance specialist before designing a new playground, upgrading an older  one and purchasing equipment.”

Otten says there are other factors, in addition to the actual equipment, that  must be considered, including the number and types of elevated and ground-level  features, surface material under and on the route to the equipment (because  surface material must meet both safety and accessibility requirements), and  routes of travel to the playground area.

“Surfaces under playground equipment must meet safety requirements so that when a  child falls, they fall on soft and safe material,” says Otten. “At the same time, the surface must also meet the requirements of the ADA to  ensure that a wheelchair can successfully navigate to and between equipment.  There are specialized materials that accomplish this; however, they tend to be  quite expensive.”

Each year the playground industry rolls out new and updated products to the  marketplace that allow children to twist and spin through tunnels, race down  hilly slides, or even walk a tightrope. What hasn’t changed is that kids love to climb, swing, slide and bounce.

“But in terms of products we routinely see, one of the most popular is called  RockBlocks. It’s for outdoor climbing—climbing walls and lateral climbing. They are a huge hit because of the gross  motor aspects. Kids are all about climbing and a lot of physical energy is  being exerted when they climb. A few other things that are popular with kids  right now are ropes, space nets, and play webs. Parents look at them as not being your  typical playground design. There’s leery parents and teachers because of the height and the climbing that’s being done. They are always a bit caught off-guard with their potential  safety. But if you fall you are going to land on ropes. It’s like a big spider web. You couldn’t get hurt if you tried.”

“Parents and kids can sometimes split on what’s challenging and fun,” says O’Brien Taylor. “Most parents do realize there are healthy risks that should be promoted for  children to learn and grow. I see lots of clients, who are also parents of  children from two to 12 that really are in tune with what’s popular and fun. They want their kids stimulated by play and see the value of  playground equipment that promotes sensory stimulating activities.”

“For the kids, some of the more exciting pieces have to do with wall climbing,  boulders and nets,” adds Knotts. “Those are the newer items that kids enjoy on playgrounds. Traditional swings and  slides are in high demand as well. In terms of what parents like, they just  want something that is safe, yet interesting and challenging for the kids. They  don’t want the kids to be bored after five minutes of them being on the playground.  So there is a balance. They understand that play is important, but there is a  balance.”

Industry experts agree that safety standards for playground equipment have  radically changed over the past two decades.

“Twenty-five years ago the ASTM (American Society for Testing and Materials) and  the Consumer Product Safety Commission (CPSC) guidelines didn’t even exist,” says O’Brien Taylor. “One of the most relevant changes is to safety surfacing. Our playgrounds were  put on compacted dirt, asphalt, or grass. The ASTM has found that approximately  75 percent of all playground accidents occur from elevated falls to improper  safety surfacing. Some of the results of the injuries from falls have been due  to surfacing that is non-impact attenuating. There is much emphasis put on  that.”

“From a guideline and safety standpoint, we’ve swung in such a direction that as manufacturers and designers, we are  pigeon-holed into designing certain ways because of guidelines that there’s no risks and no challenges,” adds Parody. “If kids can essentially master a playground the first or second go round, those  are generally the playgrounds you drive by and see no kids. You want a  playground that provides challenges and risks that will stretch your mental and  physical capabilities. People will realize that you can’t bubble-wrap your kids and that it’s good to skin your knee every once in a while.”

Playgrounds bring a sense of community to an association or HOA and it’s an amenity that will boost property value and attract families.

“I just had a meeting with a homeowners association, who are building a  playground and they are looking at it not only as an elimination liability but  also to use it to maximize their exposure in being a family-friendly townhouse  association,” says Parody. “They also want to market is as being a central courtyard type gathering place.”

There are various ways for an association or building to go about choosing what  equipment is best for their community.

“The first step in installing new equipment from scratch is to do your homework  to find the best vendor and best playground equipment,” says O’Brien Taylor. “The vendor is a true partner in the process and the playground quality should be  highly regarded. Do a playground tour and find out what these playgrounds look  like after five or ten years. Playgrounds are expensive, and good ones can cost  a little bit more—but if it lasts twice as long and does not exhibit maintenance headaches, it can  be worth it.”

Lisa Iannucci is a freelance writer and a frequent contributor to New England  Condominium. Staff Writer Christy Smith-Sloman contributed to this article.