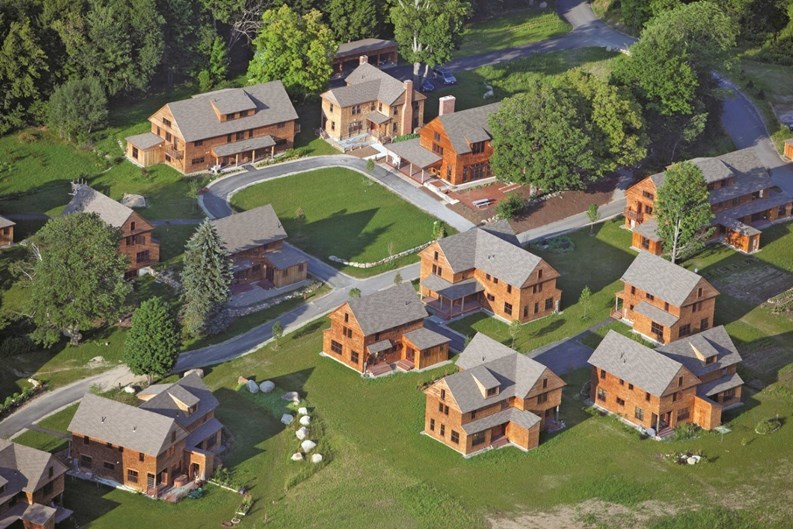 There’s both a batch of homemade beer and a vat of homemade sauerkraut aging in the boiler room of Nubanusit Neighborhood & Farm in Peterborough, New Hampshire – and it’s not even close to Oktoberfest. The maple trees were tapped months ago, and sap boiled down to thick syrup for the villagers, according to Richard Pendleton, a resident and co-founder of the cohousing community, part of a growing movement in most of New England.

In many ways cohousing mimics turn-of-the-century America, when extended families were the norm, and people of all ages took collective responsibility for the well-being of themselves and neighbors. Help was always available and people trusted each other. Children never lacked for playmates; the word “playdate” didn’t even appear in the dictionary.

Two of the neighbors in Nubanusit own horses, so a couple of kids are learning to ride. They all take turns gathering eggs from the resident hens and feeding the chickens that scramble, squawking for grain. Last year a half-dozen households split the cost of an electric lawn mower that almost everyoneborrows; and outdoor clotheslines rippling with clean laundry color the yards.

The concept of cohousing began in Denmark in the late 1980s and the trend made its way not long after to the U.S. A tract in Boulder, Colorado, was among one of the first to open in 1987, according to the Cohousing Associationof the United States. California and Washington state followed in tandem, with earliest housing established between 1991 and 1994.

Massachusetts wasted no time. Its first villages opened in 1994 and 1995. Today Massachusetts has 16 cohousing sites being formed, built, or operating.

To those who live in these communities all over America, cohousing is defined as much by what it is not, as what it is.

Cohousing describes a planned community. It is not a condo association with age limits and strict rules on accepted colors, outdoor furniture, decor, and visitors.

Nor is it a commune, similar to thoseimmortalized in the late 1950s and ‘60s, populated with hippies sharing space, money, meals, and barefoot children running through fields of cultivated marijuana.

That’s what some potential neighborsfear; their fears are soothed once they see the harmony co-housing projects exude, says Lisa Poley, chairwoman of the board of the National Cohousing Association and a resident of Shadow-lake Village in Blacksburg, Virginia.

Generally speaking, cohousing communities have several things in common. They use green, sustainable materials to build, feature energy-saving windows and insulation, and residents are sensitive to the ecology and environment. Chemical treatmentsfor crops or grass are eschewed.

In fact, residents of New View Cohousing in Acton, Massachusetts, used only half the water in one year that the town would have expected. “Everyone is water-conscious,” says Steve Hecht, a resident of the 24-unit village that opened between 1995 and 1996 after more than six years of planning.

Nubanusit in New Hampshire, named after the river that runs through it, has a central boiler fueled with woodpellets from a neighboring town. It provides clean heat and hot water for the whole community at low cost.

Design is integral to the cohousing model. Homes are individual in size and shape, but they are clustered around common spaces in order to encourage spontaneous interaction.

The villages are kid-friendly, made for pedestrians; parking is restricted tothe outside periphery of the property. Many homes have front porches, inviting casual conversation. “It’s almost impossible to be anonymous,” Poley says, laughing.

The community center is the heart of the complex, and usually includes aprofessional kitchen, meeting, dining and play areas, and a few guest rooms for visitors. Community dinners are regularly scheduled; at Shadowlake, they have one potluck and one dinner prepared by volunteers each week. In the winter, they add a Saturday breakfast. Attendance is not mandatory, but encouraged.

Residents sign up for maintenance and chores, such as keeping common areas neat, cooking meals, and serving on committees. Cohousing complexes are self-governing, and decisions are made by consensus after all members have been given the opportunity to ask questions or raise concerns.

Shadowlake Village also has a committee of three, appointed and voted in, to handle conflict resolution. “It’s amazing how effective that is,” Poley says. “It’s rare for someone to disrupt the community.”

Residents of Nubanusit meet monthly to discuss issues. The meetings are carefully structured with a timekeeper, facilitator and formal agenda. Infor-mation to be discussed is distributed prior to each meeting and residents are expected to be informed.

There are no specific demographic groups drawn to cohousing, though many tend to be well-educated professionals. Families, singles, young and old, all interests, are represented and diversity is sought. People who are drawn to such communities pretty much know what to expect. They are “self-selecting,” says Hecht.

They will live in a close-knit village, where everyone knows each other. They will be expected to share responsibilitiesof ownership and concern for the environment. They will be involved.

In return, residents have what Poley calls “an extra layer of resilience.” Whenan elderly woman had a hip replacement, for example, neighbors signed up to provide meals, as they did for a new mother after her child was born.

One family with three children at Shadowlake owned a small business, but ran into bad times, and was on the verge of losing their home. Neighbors brainstormed and came up with a plan for a community loan fund. Collectivelythey contributed $50,000. A resident businessman offered his expertise in rebuilding the business and working out a repayment plan.

The loan was paid back in full in twoyears. “A bank would have laughed them out of the room,” Poley said.

Trust in one’s neighbors is a cornerstone of the movement, and it takes time. But once accepted, it “lowers thebarriers” to quality of life, Poley says. Living is far less complicated. There’s always someone around to water the plants for a vacationing family, to sit for a sick child, to drive a neighbor to an appointment.

Legally, cohousing is set up as a condominium association; however, cohousing is governed by consensus. Ideally, cohousing begins with a group of people who agree to plans that include sharing work and expertise. Working from scratch ­– even before a site is found and architects hired – they seek out and attract those with similar aspirations, spending years on planning and building personal trust. Only after they have arrived at consensus does construction begin. Notably, such efforts sometimes fail, given the time and commitment involved, Poley said.

But Hecht, of Acton, was one of those who persevered. His group started with about five or six people in 1989. It grew to 10 or 11 the second year. Finally, the group reached a critical mass of about 17 that is considered large enough to proceed, and they hired an architect and began the searchfor a site. The first residents moved in during 1995 and 1996.

One of the founders had a small dairy herd and wanted to expand. A 100-acre farm, originally purchased for use as an equestrian center, had lain fallow for about 10 years, until the town put pressure on the owner to do something with it. The two couples bought the site, developed it along traditional cohousing models, and the first ownersmoved in late 2007 and 2008.

Twenty nine homes make up the village, with 38 residents. Eight of the homes have not yet been sold. About 40 acres of woodland was part of the property; some of it was cleared for fields to support the cows and other farm animals. The most fertile land was set apart for crops. A clear pond offers a small sandy beach for summer, and glistening ice for winter sports.

It's Not for Everyone

Cohousing is not a wise choice for everyone. Some personal autonomy is necessarily ceded to the needs of the majority. But personal space is respected; each family has a private home.

Decision by consensus is a sticking point for some, because it demands time to distribute information, gather people, to listen to all sides of arguments. Those who are able to thrive in that environment learn to trust what Hecht calls “the wisdom of the majority,” especially because no one hasbeen left unheard. All have a voice.

What is the future of cohousing? Statistics show steady growth. Zoning laws that regulate lot size have had to be amended in some towns. The weak economy has stalled some new projects, according to Maude Salinger, publicistfor Nubanusit.

Nevertheless, a strong impulse for neighborhood simplicity, diversity, sustainable growth in dense, pedestrian communities, and concern for the environment will continue to attract people to cohousing. Clearly, it is a social movement. Salinger notes that Baby Boomers may be the newest converts; instead of “senior” housing, they may choose to live among peopleof all ages. “I love being in a neighborhood with children around,” says Shelley Goguen Hulbert, mother of grown children and the dairy farmer at Nubanusit. Her husband Robin is a beekeeper.

Community living, mutual respect and trust, and communal responsibility may well be a New Democracy, governed by those who put the well-being of neighbors on the same plane as their own authority and adhere to the Africanproverb, “It takes a village.”

Susan Phillips Plese is a freelance writer based in Hartford, Connecticut. 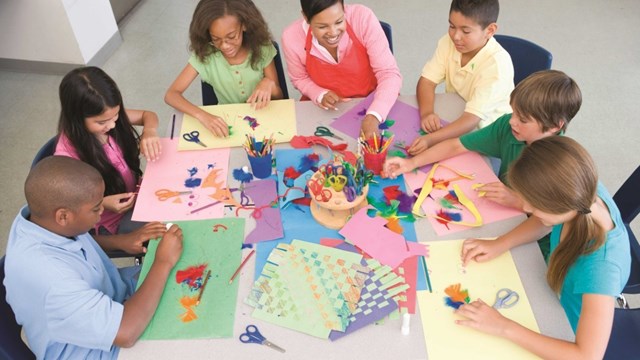